The final days of 2014 are officially here! Last week, I gave a recap of four memorable spots that I visited for the first time this past year. Click here to check out that post, or keep reading to see the final four adventures that you definitely need to put on your bucket lists for 2015! 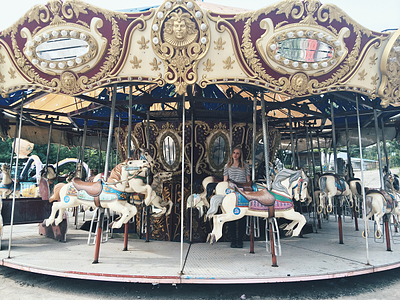 This was such an odd adventure, but one that was a lot of fun. Yongma Land, located in Seoul, is an abandoned amusement park that isn't nearly as creepy as it may sound. Its rides don't run anymore, and they're largely covered in rust and dirt, but it's far from being a horror movie set. For the small fee of 5,000 won, the park's manager, Mr. Youn, will let you come in and just wander around. I recommend bringing a camera and some friends and just having fun. Even if you aren't into photography, just walking around and looking at the broken, tattered rides is fascinating.

This bizarre, curvy building is the work of architect Zaha Hadid, and it's so, so cool. It's easy to spot, and also easy to find, since it's in a very neat area of Seoul that's especially great for shopping and traditional markets. The DDP itself isn't just a great landmark to go look at -- there are tons of quirky shops inside, as well as great restaurants and traveling exhibitions. I've done a good amount of gift shopping there and caught some cool events, from the big traveling WETA exhibit to a big swing dance flashmob! It's still a fairly new structure, but one to keep an eye on for cool events in Seoul.

I've made a couple trips out to this island off of Incheon's coast, but my favorite was my trip in late summer. The island of Muuido isn't large, but it still offers some great hiking, trekking, and, of course, beaches. We rented a small beach bungalow off of Hanagae Beach and spent our time wading out on the mudflats, enjoying the beach, and playing games on the warm sand late into the night. My recommendation would be to make a weekend trip out of Muuido with a big group of friends during the summer of 2015. It's an awesome, and easy, escape from the bustle of the Seoul area. 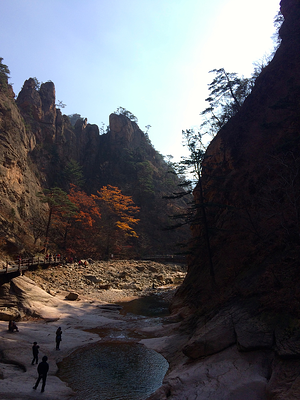 My list of favorite spots of 2014 isn't complete without mentioning my trip out to Seoraksan National Park. It took me three years to finally make the time to get to this park, and I will forever be kicking myself for putting it off. While the fall foliage wasn't at its peak when we visited in November (go in mid to late October!), the park was still beautiful. Visiting this park, in my opinion, should be high on every Korea Bucket List, simply because it's an incredible area with so much to see and do.

Well, that's my recap for 2014! Here's to new adventures in 2015, which will hopefully include some of these spots as well as many others!