How-To: Move Home from Korea with a Pet

Last month, I posted about the (sometimes) grueling process of getting packed up to move home after your time in Korea. The stress of my move was greatly compounded by an additional factor: moving a Korean cat to the U.S. In the end, it went quite smoothly, with a lot of the stress stemming from the unknowns that come with flying with an animal. Since I'm sure some of you have gotten pets in Korea or are considering it, here's an overview of how to take your Korean cat home with you.

Quick disclaimer: As I'm American, my experience extends only to the process of importing a cat to the U.S. It seems as though the laws are similar in Canada, since American citizens returning to the U.S. via a stop through Canada go through customs and immigration there, as opposed to their airport of entry to the U.S.

Also, while some of these tips also can apply to dogs, definitely do more research about what's necessary for importing dogs -- in general, vaccinations are required, as well as more paperwork.

First and foremost, find an airline that will allow pets.

This can be tricky, simply because pets aren't allowed on any flight longer than 12 hours and there are limitations on how many pets can be on any one flight. We also found that a lot airlines don't allow pets in the cabin, and some don't allow pets on international flights at all. What finally ended up happening was I took a flight from Korea to Vancouver with Air Canada, and then a separate flight booking with American from Vancouver into the U.S. This is a perfect example of weird airline pet policies: an American Airlines flight from Korea didn't allow pets, but an American Airlines flight from Canada to the U.S. did. Just do your research and make phone calls to the airlines to double check all of this before booking your ticket. I checked on flights before booking, then immediately called back after booking to confirm with the airlines that i would be carrying on a pet.

As far as bringing the cat into the cabin, which is preferred by all parties, you'll want a carrier that fits under the seat in front of you. Luckily, cats are small and seemingly made of liquid, so a soft-sided pet carrier offers plenty of room for your kitty.

Get your cat checked out by a veterinarian.

Within 10 days of your flight, simply go in and get the vet to issue a certificate of health. Right now, the Center for Disease Control in the U.S. doesn't impose a quarantine period for domestic house cats entering the country, and getting this certificate is mostly a precaution to ensure everything goes smoothly. 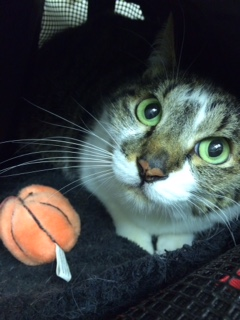 Arrive with plenty of time at the airport.

I would say give yourself another hour or so to get through security. You'll need to go to animal quarantine first and show them your flight information, the certificate of health, and the cat. It only took about 30 minutes, but just to be safe, budget in some extra time. You'll get a stamp and then you're good to check in!

At the check in counter, they'll need to see your paperwork again, and this is where you'll pay the fee for carrying on an animal.

Your next step is going through security. They wanted m3 to take the cat out of his carrier, but I didn't have a leash for him and the poor cat was pretty terrified. In the end, they allowed the cat to just be carried through the metal detector. Some airports also offer the option for a private screening room for the animal, as was the case in Vancouver. So, you have options.

And last but not least, flying.

The vet offered sedatives for the cat, but I declined, since we weren't sure how he would react to them. Luckily, he's a silent cat when he's scared, so the flights went very smoothly. Your pet will need to stay under the seat in front of you, but you can reach into the carrier to comfort them and to offer very small amounts of food and water.

That's it! It was a very stressful experience at the time -- my stomach was in knots until we touched down and settled the cat into his new home. In hindsight, I didn't have much to worry about because it all went pretty well. So, if you're thinking of getting a pet in Korea or planning to bring your pet back home with you, do it! It isn't as bad as it seems, and ultimately, completely worth it.