One of the fun things a foreigner can do while teaching in Korea is explore all the activities and sports that are open to us as ex-pats in this country. A big part of the mentality here in South Korea is being healthy and staying in shape. There may be a lot of focus on how you look here, but it’s important to realize how hard they work to stay healthy both inside and out. I had been looking for something to do to get in shape by the summer that didn’t involve doing boring activities at a gym or playing sports. I finally decided to sign myself up for yoga, because it was time for me to try something new! 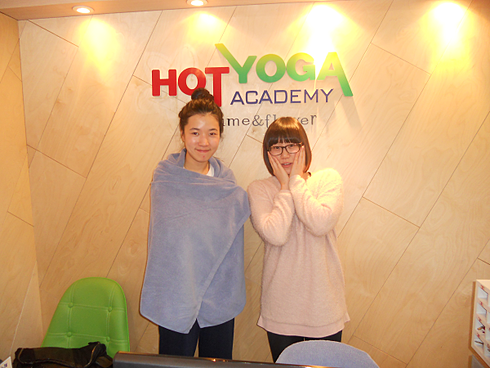 Yoga is one of many popular health activities that an ex-pat living in South Korea can participate in to stay fit!

One of the most daunting issues I had to face was following along with the classes. I was so worried about how silly I would look in the room since I couldn’t understand Korean that well. Luckily for me, it all started off very smoothly, since the manager had been studying English and showed me the ropes at the academy and made me feel completely comfortable. There was something very assuring about being in that yoga academy even though I was technically alone, and pretty sure that all the girls around were talking about me.

The funny thing about the class was that even though I worked hard to improve my feeble Korean, the mistakes I made on the yoga moves would have probably been the same things even if the teacher had been speaking English. The classroom has mirrored walls so you can check your posture and follow along with the teacher. I wasn’t alone in the confusion of the complicated movements since many of us struggled to do exactly what the teacher was doing. Because of the mirrored interior, you can see all the hilarious faces of utter confusion people are making. I usually end up losing focus and just falling down laughing. I’m not alone in this.

Another great part of doing these classes is the people that I’m meeting. Sure, we can’t talk all that much, but we can communicate in other ways. I’ve actually made two friends in the class now and just the other night we stayed afterwards just talking in English and Korean, getting to know each other.

The whole point of this article is that you shouldn’t feel scared or intimidated to do anything here in Korea. You will find wonderful people everywhere who will want to get to know you and will work to overcome the language barrier with you. Get out and do something different and you definitely won’t regret it!

Laura Kavanagh is an East Coast girl at heart who graduated from the University of Toronto in Ontario. After a brief volunteer trip to South America, the idea of traveling with a purpose inspired her to get out into the world and make something of herself. Shortly after, Laura snagged a fabulous teaching position at ChungDahm April English through Aclipse. One year later, she is now Head Instructor and loving her life in Bucheon, South Korea. Laura is currently studying the Korean language, where she tries to learn three new words a day. Her favorite one? 'Chinja?!' meaning 'Really?!'

Check out her blog and Connect with her on Twitter. Any questions? Hit her up at laura.aclipse@gmail.com!

Tags: ex-pat life in Korea, Activities to do in Korea, health and safety in Korea