Nearly every block in Korea has a convenience store, and every neighborhood has a mini/super market. When I first got to South Korea to teach English, I had no problem finding these stores. The only problem was that their selection was limited. It wasn’t the Target or even the Ralphs I was used to back home. There had to be something bigger with more foreign selections. I was right!

The 3 biggest retailers in South Korea are Home Plus, E-Mart, and Lotte Mart. They carry everything from groceries, clothes, and electronics. They are comparable to the Wal-Mart’s and Target’s of North America.  Home plus is more like Wal-Mart. Plain interior design and a carrier of a generic brand, TESCO of the UK in this case. Yet, they don’t carry as much foreign food as E-Mart and Lotte Mart. These two are more like Target. It’s cleaner, brighter, and more appealing to shop in. Not only do they have more foreign food selection, I feel that the quality overall is better. 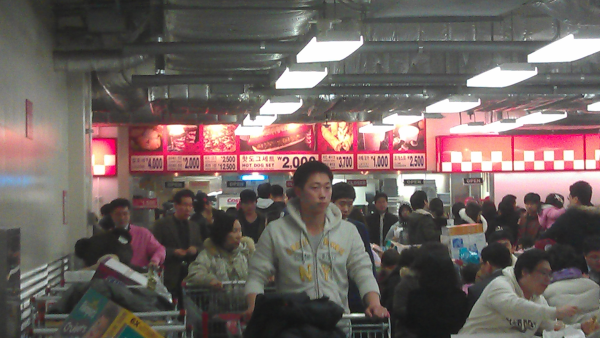 If you’re lucky, there may be a Costco in your area. The great thing is, if you have a membership from back home, you can also use it in Korea! You won’t find everything you would at a Costco in the US, but I’m sure you’ll be satisfied. Personally, I’m happy that I can still get a roasted chicken to take home and eat their delicious pizza, hot dog, and chicken bake at a bargain price!

Yoon escaped from Los Angeles, California after finding himself hating his job at the bank. Knowing of opportunities to teach English in Korea, he took this chance to take on the excitement of living in a foreign country. Thankfully, Aclipseplaced him at a great Chungdahm branch in Jamsil. He is enjoying almost every moment of it and would like to share his experience with you through his blog.