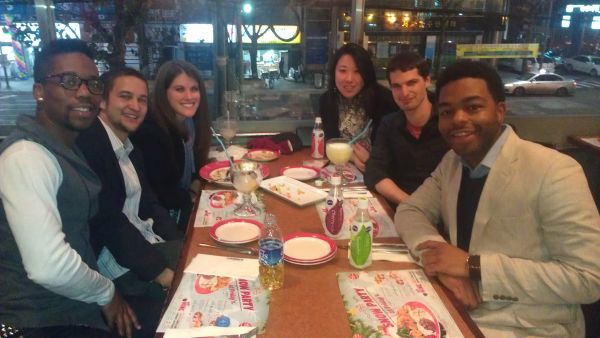 I have been teaching English in South Korea for under a year and I was so excited to celebrate New Year's eve in a new country. Seoul for New Year’s Eve was a night to remember. The city was freezing cold, people were crowded on the streets at midnight, and everyone wanted to have a good time.

After being in Jeju for 10 months, I forgot how many foreigners are in Seoul. I am not used to seeing so many faces like mine. One million foreigners live in Korea, and over half of them live in Seoul. That is a lot!  Seoul is so different yet so similar to Jeju. It is similar because Jeju has all the chain stores and coffee shops that Seoul does, but Seoul has them doubled. I thought that would be hard to beat considering Jeju has a coffee shop on every corner. I saw so many Outback Steakhouses  walking around the city, I counted seven different locations, including two that were one block apart, separated by a TGI Fridays.

The hustle and bustle of the city was a nice change for the weekend. I went with a group of friends including my girlfriend, Jenna, two of my co-workers, Mike and Adam, and another friend, Sunny. We found a cheap flight on Asiana Airlines going there and a cheap flight on T-Way Airlines on the way back. Jeju is only an hour flight away from Seoul, the trip was quick and easy.

Our hostel was less than desirable. We had a hard time finding a hostel or guesthouse available on New Year’s Eve, even two weeks in advance. The owners of Stay Korea  were nice and accommodating, but the facilities were the bare minimum and the common room smelled overwhelmingly like sewage.  Although, when I forgot my key out at the bars, the owner came from her home to let me in, I was very grateful not to have to wait in the cold for too long.

We had dinner that night at TGI Friday’s and then went looking for a club. We were in the Hong-dae area and it was packed with people, despite the cold. We stood in line for a club, Papa Gorilla, for 15-20 minutes, and got in only 30 minutes before midnight. The club was crowded with Koreans and foreigners alike. We had a really great night.

The next day we had the whole day to spend in Seoul. We slept in, then met up with the group and took the subway to Itaewon for Mexican food. Los Amigos restaurant was excellent!

After lunch we headed to Myeoung-dong for some shopping. The streets were extremely crowded, as always. The highlight of the day was going to a dog café, a place to drink coffee and play with dogs. The dachshund puppy was my favorite.

Before dinner we made appointments at a spa for back massages and foot baths in a fish tank, the fish eat the dead skin off your feet.  We finished off our trip with a good dinner at California Pizza Kitchen.

We had to get up very early the next morning to make it to the subway to take us to the airport. Luckily, I was able to nap before heading off to work at 2 pm.

New Year’s in Seoul will be an event to remember for the rest of my life!