Want to drink in Korea? Get to know Soju. 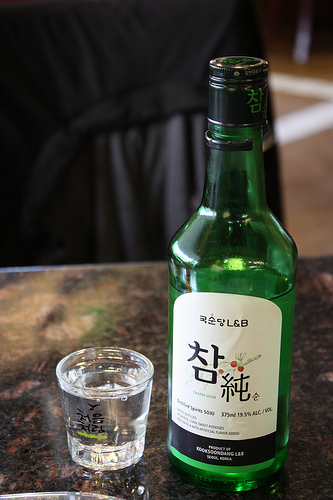 Watch out! Soju packs a punch!

Soju you have done it to me again. No matter how many times I say I won’t touch you, I keep coming back. Maybe because it is so cheap (retails for about  ~$1 a bottle). Or maybe because it is so ubiquitous (can be found in practically all restaurants/markets).  Or better yet, maybe it has to do with being such a Korean staple that if you ever go out with some Koreans, someone is bound to order it. Whatever the reasons,  I often find myself drinking soju when I am out to dinner or for a night out on the town.

Don’t get me wrong though, that is not such a bad thing. Besides being easy on the wallet, soju does have a much milder taste compared to other hard spirits. Drinking it straight, soju can be closest compared to vodka but I have always found it be much smoother and less harsh. Also, similar to vodka, soju is a great mixer that can be added to any type of sweet drink (think juice, soda) to mask its flavor. In fact, my favorite way to consume soju is by mixing it with a glass of beer. In Korea, this is a fairly common way to consume it, so much so that Koreans have given the combination the name so mek (beer in Korean is mekju, so soju+mekju=so mek).

Soju differs from vodka, however, in that it is traditionally made from rice. Also, it generally has a much lower alcohol content from other hard drinks such as vodka. The alcohol range differs depending on the producer but it usually ranges from 20%-30%.

So why have I tried to swear off soju? I mean compared to other drinks, it is much cheaper and not as potent. Plus, from my experience, Koreans love it when foreigners partake in their national drink. But therein lies the problem, it is so easy to consume, so cheap, and such a sociable drink that it is easy to get carried away with it. There have been many nights where I was not planning on drinking, but inevitably, someone orders a bottle of soju. A few bottles later, I leave the restaurant feeling fine, but I wake up in the morning with a pounding headache. Did I mention that soju, even small amounts, gives me the worst hangovers?

Let me know your experiences with soju and your opinion on this omnipresent Korean beverage!