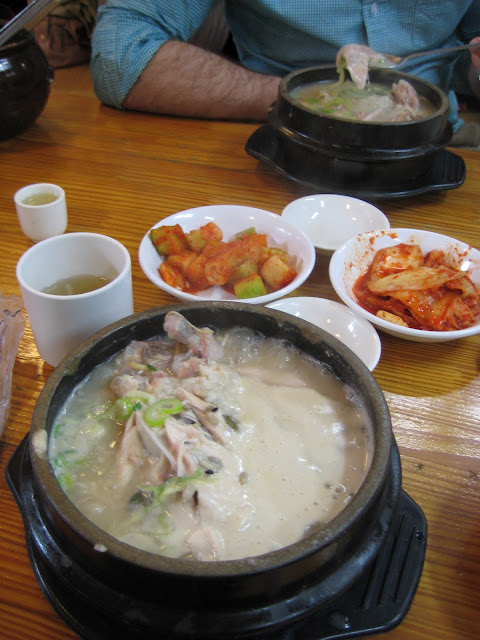 Samgyetang is a traditional Korean soup served all year round, but most popular during the summer time. The name literally means ginseng chicken soup, which you can probably guess the two main ingredients. The chicken is stuffed with some sticky sweet rice and cooked whole in broth. It is served in an earthenware bowl with a whole piece of ginseng and a jujube.

I heard people like to eat this soup during the summer because not only does it replenish your body with nutrients, but also that eating hot things during the hot season supposedly keeps you cool. 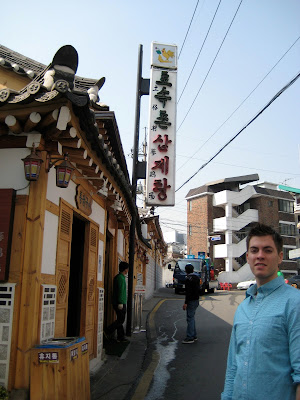 Tosokchon is a restaurant in north Seoul famous for this soup. I heard about this restaurant from many tourists. They claim that the soup is so good that everyday there is a line of people wrapped around the restaurant waiting to get a taste of the soup. I had to check it out. 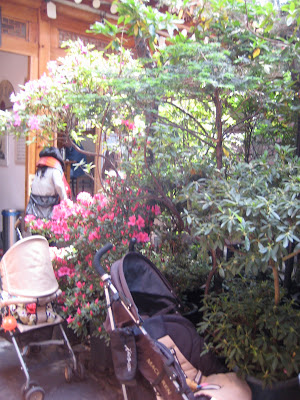 I arrived just before lunch time, so I was able to get a seat pretty easily. The building is designed to look like a traditional Korean home, before all the fancy apartments took over. There is a little courtyard in the middle with a nice garden that you can look at when you're eating your soup. I don't know if they have tables with chairs, but all the seating in the rooms I passed by were floor seating. 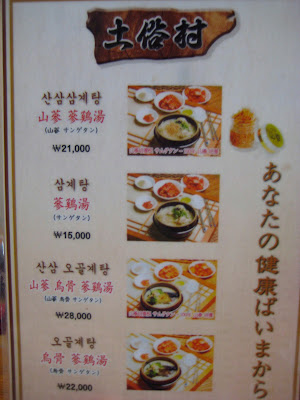 The soup itself was really good. The meat falls off the bones and the kimchee is perfectly ripe. It was a bit hard to eat because I kept having to pick through the soup to fish out the bones.

The one thing that I wasn't very satisfied with was the seating arrangements and the service. The tables are lined up in rows and placed very close to each other. I sat right in the middle of a row and had to get up every time to let people pass by me. As far as the service, the staff didn't speak any English and they were pretty much nowhere to be found. This place is swamped by tourists from all over the world, and I was pretty surprised that the staff couldn't understand a lady asking for water.

Should you check it out? Definitely. Like I mentioned before, the food is good. Don't expect 5 Star service, but do go there to taste the soup Koreans swear makes you healthy.

Tosokchon (토속촌) is located near exit 2 of Gyeongbokgung on line 3. Walk straight out and turn left when you see a GS convenience store.