Most neighborhoods have similar stuff going on unless you get to live in one of the more exciting areas of Seoul like say Hongdae (university party scene.) But a lot of times teachers get into a groove and don't even explore their immediate location. Just to educate and maybe motivate, here is a short list of what I dig around Pyeongchon and Beomgye station. 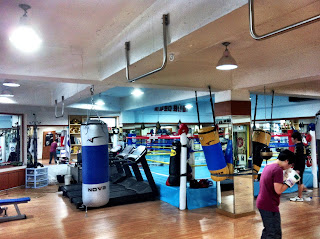 The first thing on my list of what's up in my neighborhood is an alternative to the regular gym. Now, I'm lucky enough to have a silly cheap, reasonably well equipped gym in my building ($55 for 3 months, about 16 floors down) and yet I cannot motivate myself to go regularly. With that in mind I was looking for something more commitment based to get myself beach ready for Mudfest. I considered yoga, kickboxing or getting a personal trainer. But a bunch of my friends here are into boxing and suggested it so why not.

Turns out it's pretty fun. My trainer is a cool hombre and is somehow able to teach me what to do even though we don't understand a word between us. It took about a week and a half but now I finally get to actually punch things instead of just never-ending jump rope so I'm hype about what happens next, although I'm nervous he is going to put me in the ring. 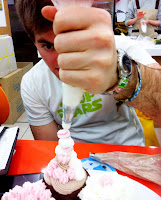 I've been asked by my girlfriend about a million times to go do this once she found out it existed a mere 5 minutes from our front door. Naturally I put it off as long as possible, but I actually ended up having a pretty good time. You get the option of doing a cake, cupcakes or muffins and then flavor of frosting and what 'tip', or pattern, you want. After that, you can take it anywhere you want in the realm of your creativity. Which for me was one chocolate cupcake that literally looked like poop and an ode to a wonderful girlfriend... 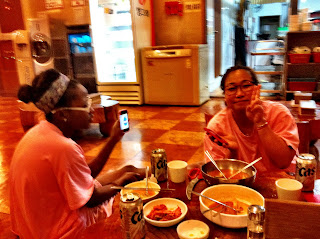 Finally I made it to my favorite of all 'bangs' in Korea. The bathhouse. But in Korea, it is so much more than that. And as it turns out, Pyeongchon has a reasonably well equipped one right near the station. I developed a cold over the weekend and as many Koreans will tell you, that means its time to go sweat it out. So sweat I did. Oh and ate ramyeon, had a beer, and played iPhone games with my friends all night.

If you haven't enjoyed what Korean saunas have to offer then you are missing out. In Seoul check out Dragon Spa right outside of Yongsan station, or THIS HUGE LIST (ok not that huge) to find one nearest you.

David Letts was born in Montreal to an Australian family and grew up in Boston. He graduated from the University of Wisconsin-Madison and then immediately made his way out to Korea and is currently teaching for his second year in Anyang. With a better focus on saving money as well as exploration David is going to try to see as much as he can before this year is up. Follow his blog to see what he’s up to!

Tags: Pyeongchon, Beomgye, Dragon Spa, Jjimjilbang, What to do Korea