As a nerd, one of my favorite areas of Seoul is Yongsan. Yongsan station is easy to find and (pretty much) everything you would want is right there. A large CGV (with IMAX!), E-mart, I' Park Mall, and an e-Sports Stadium. Yes. E-sports. Because Starcraft is really a sport here. And one of the floors of the I'Park is half-dedicated to selling video games. You can find pretty much anything here you would regularly need, including games, systems and accessories. They even get fresh releases from Japan occasionally (nearly threw down $500 for a shiny Japanese 3DS several months before US release).

HOWEVER a lot of times the latest games are only in Korean. Another difficult decision is buying a system out here. If you buy it in Yongsan, then you have to deal with a system that uses the local power source and won't be easily transferrable back to your home country. 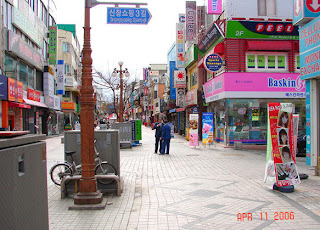 A possible solution is available in Songtan. If you don't know about Songtan you probably don't live south of the city. Songtan is home to the Osan Army Base and consequently is like a tiny, grimier Itaewon.

Take the Korail Dark Blue Line 1 (same line for Suwon) to Songtan station. If you walk out Exit 4 you will see a round about full of taxis. Get in one and ask for the "Main Gate". These instructions will get you dropped off in front of a long street full of shopping called the "Shinjang Shopping Mall".

If you walk down this street a little ways, you will see on your left ba da da DAAAAA *real* (?) GameStop. It's not very big but the selection seemed pretty good for everything BUT Nintendo stuff. I guess Army dudes are pretty PS3/Xbox exclusive. 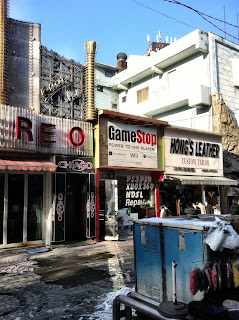 The major selling point here is that everything is American! The systems, the games, even extra chargers! That is pretty rare. They accept both USD and Won and the pricing is fair. Additionally they offer to mod any system. A modded Nintendo Wii with roughly 100 games costs $300. To mod an Xbox or PS3 is $95. They also sell flash carts for the original DS but they sell the same horrible TTDS cart as Yongsan, and you don't want that. Trust me.

I went there with high hopes of getting 3DS games and I was disappointed in a big way. They had 3 games and they were all junk. The guy working there was a foreigner and he was pretty friendly.

If you want something specific I'd suggest calling ahead.

To celebrate your nerdy purchases, you should head a little further down the street where on the left is....Popeye's! 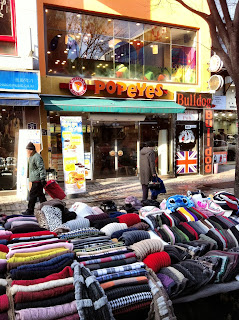 This Popeye's is great because of not only the buttery biscuits but one of their soda options is Mountain Dew! Where else do you find that in Korea (lately lots of places...I need to improve my diet)? And nothing makes you want the dew more than video games and that's a fact. FYI you get one free refill.