Making way for multimedia while teaching in Korea

There are a lot of classes that require a TV or a projector so students could see videos related to the subject they are learning that day. Since the topics are mostly history and science related, videos capture the students' attention and give them a visual understanding of what they are learning. Students are also required to take review tests online, as well as homework. 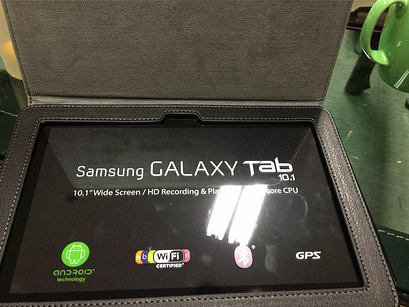 But today, Chungdahm is trying to do more than that by adding more multimedia in the classroom. A couple weeks back, I tweeted that Chungdahm will be giving out Samsung Galaxy tabs to its teachers. Well these tablets are not meant for only our personal use, but to also incorporate it in the class. Instead of using books, teachers can directly upload the class material on the tab, which can hook up to a big screen TV also provided in our classrooms.

By having the material pulled up on the TV, teachers can highlight, underline, or point out materials in the book without having to individually point at each student's book.

At this point, teachers are just trying to get used to using the Galaxy tab. However, starting Spring of 2013, all classes in Chungdahm will be taught using our newly available multimedia.

Some people may argue that too much multimedia can distract students and take away from the traditional way of learning. But at this point, the lives of Koreans (as well as other countries) are so used to being wired that this might actually be a revolutionary way for students to learn.

What do you think about using more multimedia in the classroom?

Tags: multimedia in the classroom, teaching in Korea, teaching at Chungdahm