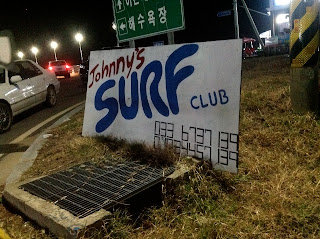 Whenever people want to know what to do in while teaching English in Korea I always want to have something interesting to say. I prefer talking about the skin-eating fish (for health) or the cheerleaders at baseball games over the temples and museums. Don't get the wrong, the museums can be dope. I respect the Turtle Ship Yi Sun-sin.  But really, who wants to sound like they did the same thing everyone else did when they travelled? Doesn't it spark a mini-rage that your photo album is indistinguishable from anyone else's save a photoshop of your face on theirs? I'm beating a dead horse. I dig the unexpected and that's what this is about. 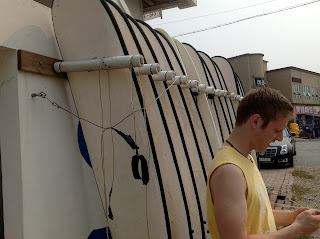 First, I gotta apologize for the zero surfing pics in this surf trip post. iPads weren't made for the sand y'all and theres nothing I can do about that.

My friend told me about this party he knew about at a surf shack down south at a place called Hajodae. The occasion was the opening weekend for Johnny's Surf Club and for about W100,000 I had unlimited use of boards/equipment, a bed to sleep in, and dinner Saturday night. I'm not exactly sure where to start with how interesting this place and the man running the show is, but needless to say I got my money's worth. 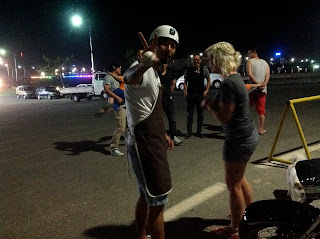 Johnny might be the world's most interesting man. I barely had a full conversation with the guy, but even the random items around the camp were enough to elicit stories from the people surrounding this character. I idly played with a punching bag hanging outside the bedrooms when his girlfriend walked past and informed me that she took boxing lessons from Johnny. And that he had been an amateur boxer for three years at some point. After going for the first surf that afternoon I hung up my towel with a giant Red Sox 'B' on it and he proceeded to tell me about his year in art school next to BU. I asked somebody else what kind of art Johnny was into later and they had no idea what I was talking about, they said he made his money by freelance writing, most notably for the Korean GQ. There was no figuring this man out, but above all this mystery was the fact that he might be the most genuine host I've ever had.

The house is located right on the beach, with a rooftop deck that allows you to easily spot if it's worth walking over or not for a paddle out. The dinner was incredible, almost never-ending. And between the surfing, the people, and the midnight baseball on the sand under the lights, I had a ton of unexpected, unpredictable fun.

If you want to check it out, then some info is available at this blog. Holler at him, it's a good time. 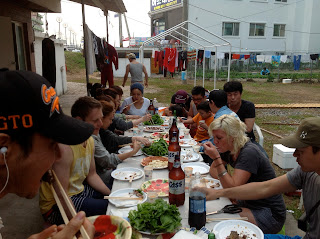 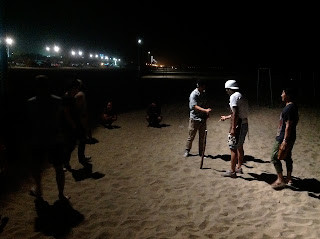