A Teacher in Korea Tries to Eat His Way Through Insadong

Insadong is one of the larger outdoor markets in Seoul.  It is best known as the art district is Seoul, but there are plenty of antiques to be found there as well. There is a ton of shopping and street performers galore. As an English teacher in South Korea, Insadong has become of my favorite places to visit when I am in Seoul.

Last weekend, a fellow English teacher and I were walking around Insadong and were commenting on how good all of the food looked. Being a huge fan of street food, as well as trying new things, we ended up with the obvious conclusion that we needed to attempt to eat our way through the district.  Our task would be to stop at as many street food venders as we could before reaching the subway station.  As with any challenge, we wanted to be thorough about it, so we walked to the end of the street and prepared ourselves for the guttural task ahead of us.

We began by treating ourselves to a good ole fashion lemonade in a Ziploc bag. Our reasoning was twofold. First, we were bound to get thirsty. Second, we decided it would be good to increase the difficulty of our challenge by having something hard to hold on to throughout our journey.  On a side note, it has become very popular for venders to sell drinks in this fashion.  There was even a second cart next to this one that sold cocktails that come in a convenient bag. 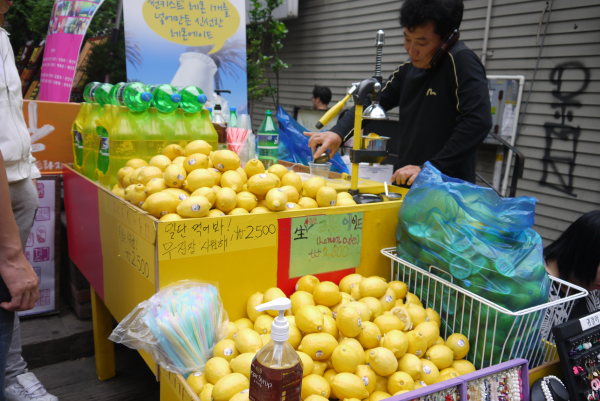 Next stop was hotteok. This is a personal favorite of mine. Hotteok is similar to a fried pancake filled with cinnamon, honey, and nuts. It is more of a food for the winter, but I love it year round.  In addition, whenever I travel on the bus, they are one of my inevitable purchases from the rest stop. 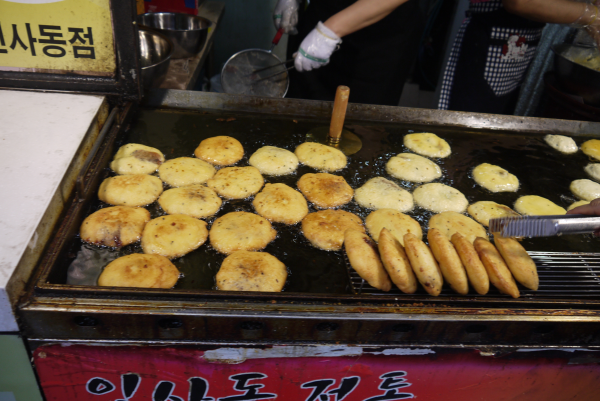 Following the hotteok, we moved on to the sweet custard bread. In order to make them, the person adds the batter to mold. After they begin to form, they add a dollop of red bean paste into the middle.  These are very similar to manjoo, but with manjoo, they add custard instead of red bean.  These are super tasty, but be careful because the red bean gets super hot! 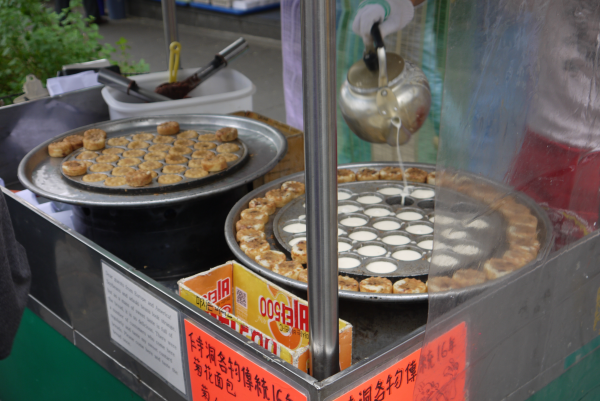 Then, we decided to try something that neither of us had seen before- chalba.  Chalba turned out to be like a street version of the hot pocket.  While they offered flavors such as: autumn squash, curry cheese, bulgogi, and sweet potato, we decided to go with the pizza chalba.  As with any pizza in Korea, it was full of corn, cheese, sauce and meat.  This was my fellow teacher’s favorite food of the day, but something about the sauce made it a little too sweet for me. 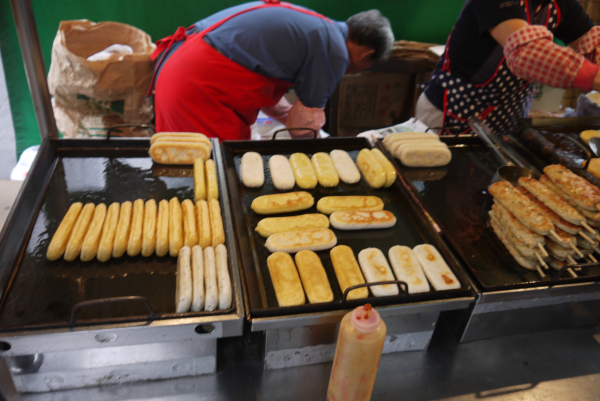 After the chalba, we moved on to dakkochi.  This is basically the same as a normal barbeque shish kabob.  You really can’t go wrong with ordering them from street vendors.  A quick tip- they usually leave scissors out on the stand for you to use to cut down the stick as you eat it.  Just make sure that you are careful as you cut it (mine may have flown off and almost hit an innocent bystander).

Finally, what food challenge would be complete without dessert?

Our first stop was one that we had been joking about all day.  We had seen people eating this awfully funny looking take on traditional ice cream.  Given that we were on a challenge, we had to try it.  In the end, it tasted like a typical ice cream cone, but with an added comic value. 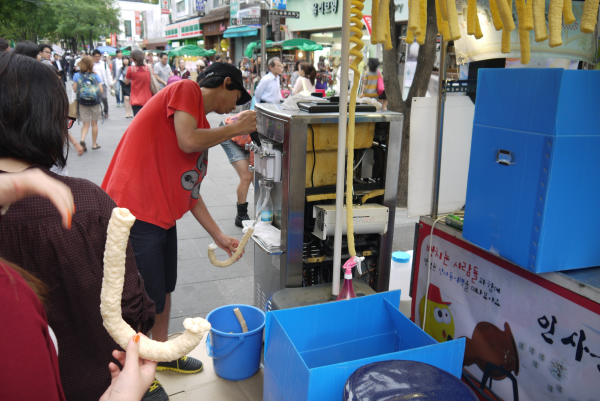 The last food we went for was called kkultarae.  These are traditional court cakes.  The history kkultarae is that they were presented for the kings and court guests.  In order to make it, they begin by taking a large circle of solid honey and proceed to stretch it.  To keep it from sticking together, they use a flour mixture.  Then, they proceed to twist and fold it until they have reached 16,000 strands.  This represents the prayer for longevity, health, and good fortune.  This was my favorite food of the day. 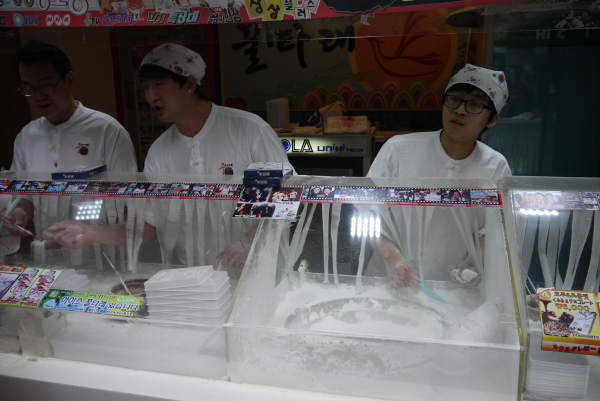 In the end, we decided that we accomplished our mission.  We may have skipped a few of the most common street foods, but overall it was a success.  Next time you are travelling around Korea, try to spice things up with making a challenge of your own!

Nash Brodsky grew up in Denver, Colorado and is currently teaching for CDI in Gwangju, Korea.  After graduating from the University of Massachusetts with degrees in Psychology and Music, he decided to embark on first year living abroad by taking on the challenges of teaching in a foreign country.  With the excitement of teaching children and the adventures of living in another country, Nash is enjoying every minute of what Korea has to offer. Follow Nash during his time abroad!

Tags: food in Korea, Activities to do in Korea, places in korea, Weekend activities in Korea