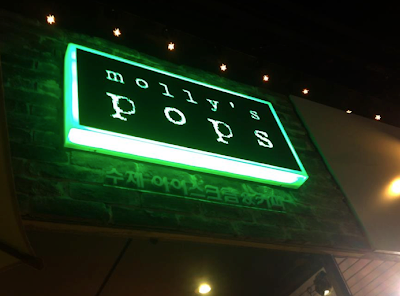 If you're in the mood to eat good homemade ice cream while teaching English in South Korea, swing by Molly's Pops. Word on the streets is that they have the best popsicles in Korea. 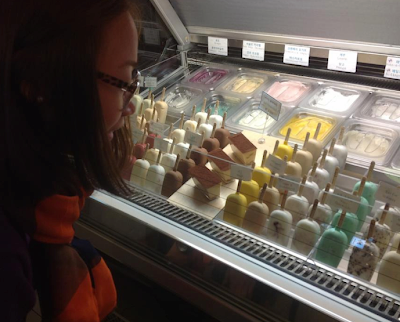 Although you can get scoops of the ice cream, the popsicles are what stands out when you first walk in. They are arranged in an assortment of colors, as well as different flavors. Some of the flavors are pretty standard (mixed nuts, mint chocolate) while others are not (Erdinger's beer, wasabi, and makoli- Korean rice wine). 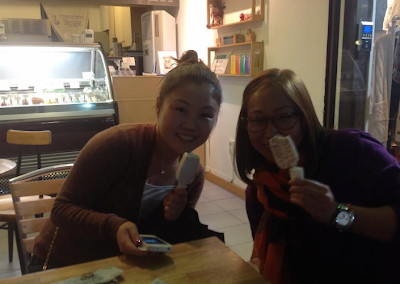 My friends and I were going to play games so the loser could try the "unique" flavors, but we decided that for our first time it'd be best to go for what seemed more appealing to us. I got probably the most "boring" out of my friends- brownie mix. Typical, but out of this world delicious. I literally tasted morsels of brownie in my vanilla based popsicle.

My friends got the wine and strawberry flavor, which was delicious. Almost like a sangria, but in a form of a popsicle of course! The alcoholic flavors are actually not sold to minors, even though you can't really get drunk off of these. 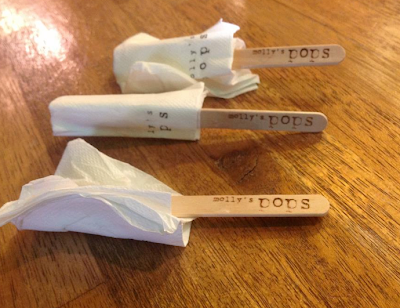 I ended up ordering another one....just because I could. I did not feel guilty about eating an extra popsicle because I went through a pretty stressful week. The pomegranate one tastes like a super concentrated pomegranate juice. It was sweet and sour and delicious all at once.

Although a little on the expensive side for popsicles, keep in mind that these are all homemade and the flavors are super concentrated. I'm sure they're also healthier than the processed and mass-produced kinds. Prices are 2800WON (~$2.50) per popsicle. I suggest going with a bunch of close friends so they can all order different ones and you can get a taste of all.

I could tell this place was pretty popular because every one who walked by the store would comment on how famous it was around the Hongik University area and how delicious it was.

Molly's Pops is a little hard to find because it's located in the back streets. Turn a right out of exit #8 at Hongik University station. Keep straight until you see a big T-world cell phone shop and turn left. Follow the side streets and you'll see the store on your right.