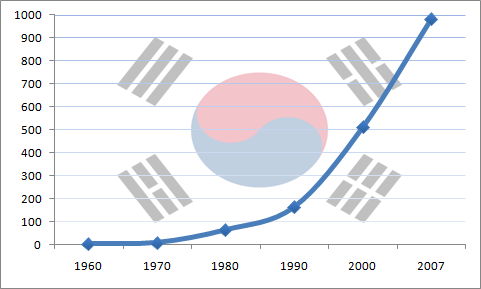 Korea had to deal with other obstacles as well. Even after all the destruction of the war, Korea still had a very high population density rate. In terms of land size, Korea is relatively small, but its population is high. Also, being that the land size is so small, the country does not have a lot of natural resources to work with. Understanding the challenges ahead, the government decided to focus on industry and education.

So that is where the internationally-known name brands such as Kia, Samsung, and LG got their start. The government invested lots of money in these industries and they in turn took advantage of the abundant amount of labor that was available for cheap after the war. On the other end of the spectrum, the government invested tons of money into the educational system. Education was seen as a way out of poverty.

This plan worked as Korea became one of the fastest growing economies in the world from the 1960s to the 1990s. With the progress made in the educational system, the Korean labor pool became more skilled, which in turn, allowed Korean companies became more and more competive in the global market. They also became more innovative and technological. Today, Kia is competing with the likes of Toyota and Samsung is head to head with Apple.

But how do English teachers come into play? Well, during this time, Korea also developed a more outward approach in terms of their economic and educational systems. Seeing the importance of English at the onset of globalization, the government invested heavily in the English language. Schools were required to teach English, English academies were established, and foreign teachers were brought in to aid with teaching the language. Now, the government is not such big player in teaching the English language, although there still are government programs to support it. Over time, the business has become more privatized, and now private English academies can be found on every other corner in Korea.

So if you come to teach English in Korea, you will become a part of Korea's progress into one of the top economies in the world. For me, it has been interesting to personally witness this progress and growth!