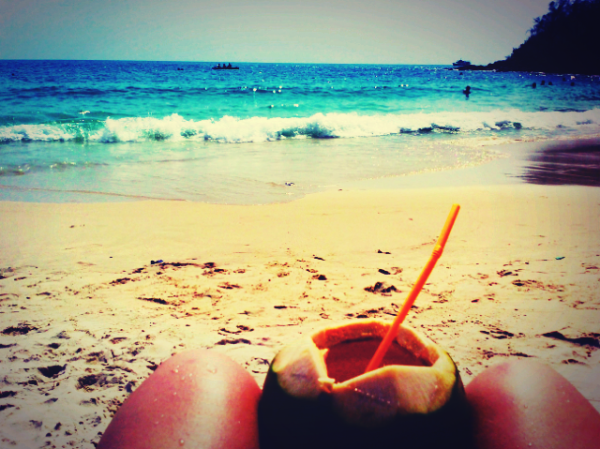 Bangkok proved to be a bustling yet non-intimidating and easily navigable city. I'm not sure what I expected, but my desire to be beach-side and maybe Hangover 2 clouded my judgements and I hoped to leave the city shortly after my arrival. I was pleasantly surprised by Bangkok. I spent 3 nights at the Refill Now! hostel (Please stay here if you are ever in Bangkok!) and made time to explore the splendidly colorful Grand Palace via water transportation, get lost meandering the hundereds of stalls at the famous Chatuck weekend market, wander the backpacker's party street of Koh San until the early morning hours, and celebrate NYE with a friend from home who now lives in Thailand.

After a whirlwind tour of Bangkok I was more than ready to find a map of Thailand and choose an island to getaway to for the remainder of my vacation. My friend had to return to work so I was left to travel solo and any solo-travel-nerves I might have had when I booked my trip a few months back vanished as I made my way to the Bangkok bus station. I was ready for some quality relaxation and I didn't mind that a few couples and groups of friends eyed me curiously (I think this was just in my self-centered imagination.) on the ferry from the mainland of Rayong to Koh Samet. I think the lone traveler is mysterious. I imagined an outlandish alter identity for myself, although I do think 'English Teacher in South Korea' is pretty darn cool and adventurous. My 20 year old self would have been self conscious, I know it. She would have told herself everyone thought it was strange she was traveling alone and that she must be a lonely cat lady. My 25 year old self, having successfully matured (a bit!) and gained some wisdom in a large part due to her year abroad in Korea, brushed these people and their non-existent thoughts aside and realized she would probably never see them again and she was about to embark on an epic island getaway.

My first full day on Koh Samet is nearly over and I look forward to 2 mores days of sun and fun. The nice thing about vacationing alone is that you are free to do exactly what you want to do exactly when you want to do it. If I want to sleep in I can. If I sporadically decide to stay in the ocean for an entire hour flopping around pretending to be a mermaid no one is impatiently waiting for me on the beach. If I want to go to bed at 10pm there is no judgement. I have also found that the lone traveler is sometimes the most sociable. While a large group of friends may seem intimidating, when you are on your own you are more likely to be approached by others. On the ferry to Koh Samet I met 2 guys who teach in Japan and were vacationing like me. Many young people at my resort beach have also been extremely friendly.

Although I love to socialize, I am using these last few days in Thailand to relax, work on my tan (using SPF!), catch up on all the books I bought for my iPad in 2012 and recharge for the next few months of teaching in Korea. I would tell you all about the delicious pad Thai I plan to consume tonight, but a beach massage advertisement just caught my eye. A one-hour-full-body-massage for about $9...oh, don't you wish you were here?