Why is bibimbap my favorite food? First off, there are several different varieties and ways to prepare it (more on this later). Second, it is a really healthy dish full of a diverse array of vegetables. My friends and I like to think of it as a Korean salad. Typical Korean restaurants do not serve salads, but bibimbap is a perfect substitute. Third, the serving size is generally just perfect and it gives me a great boost of energy after eating it. It is my favorite meal to eat at lunch because it helps me get through my day of teaching English with lots of energy, but yet it never feels too heavy. Last, but not least, bibimbap tastes delicious!!

Now let's talk about what exactly is bibimbap. Bibimbap is served in a bowl that can be either of cold metal, like below: 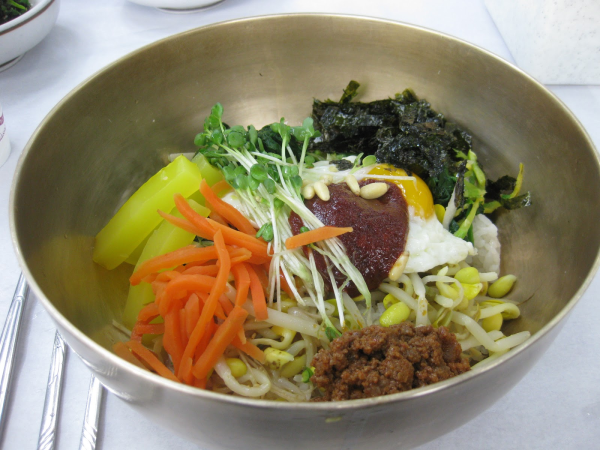 So, what are the typical ingredients of bibimbap? Well a warm mound of rice is central to any type of bibimbap. Surrounding the rice is usually a thinly sliced meat, the most common being bulgogi (grilled ribeye steak), but it really could be any type of meat. Also surrounding the mound of rice are a medley of vegetables. Commons ones include sauteed mung bean sprouts,  sauteed mushrooms, pickled cucumber, braised zucchini, and daikon (similar to a radish). Placed on top of the vegetables is an egg fried sunny-side up and then the entire dish is drizzled with sesame oil. What ties the whole dish together and gives bibimbap its unique taste is the dollop of kochujang, a spicy red pepper paste (seen below.) 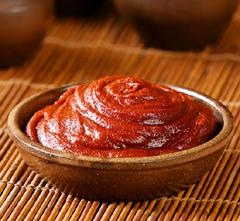 When you are served bibimbap, don't start eating right away. The key to eating good bibimbap is to stir and mix the rice, meat, egg, vegetables, and pepper sauce until all the ingredients have been blended together. The dish should take on a red tint from the pepper sauce, and that is when you know the bibimbap is ready to eat!

Let me know what you think about bibimbap or tell me some of your favorite Korean dishes!