Jimjilbanging in Korea: It's just like naked bungee jumping.

The Korean jimjilbang is right up there with kimchi and they may in fact both compete for the top spot. They are well-known elements of Korean culture. Jimjilbangs are large public bath houses (mostly gender-segregated) and can be found on almost every street in Korea. Some are more fancy than others, but most have a handful of hot baths, showers, saunas, massage tables, lockers, sleeping areas and social meeting spaces. Jimjilbangs are usually open 24 hours a day and many people visit them to bathe, relax and sleep. Many rooms, including the saunas, have special minerals, woods and stones to create a soothing sanctuary and provide elements of traditional Korean medicine. The Korean jimjilbang is a familiar and calming oasis for all Koreans. Each is a mini spa that caters to your every need. They are more prevalent than Starbucks shops and you can spend a day in one for the cost of a latte and a snack. They sound perfect, right?

Kimchi is also found on every Korean street and it sneaks onto most breakfast, lunch and dinner plates. I bought a jar of kimchi back in NH a week before I left for Korea. I thought if I mastered the spicy fermented vegetable dish I would slide seamlessly into the role of 'expat in Korea'. The jar's strong smell intimidated me and I reluctantly left the snack in my mom's fridge for her to enjoy as she wept over my departure. After some time in Korea I learned to love kimchi. Some kinds are tastier than others and I prefer grilled kimchi over the cold stuff. It didn't happen overnight, but I mastered kimchi and I figured the jimjilbang was next up. I could do this. I could adapt. I could be brave. The only thing is, I didn't have to get naked in public to eat kimchi.

I agreed to a Thursday night jimjilbang date after a few too many drinks the weekend before. A few friends promised I could not leave Korea without a famous jimjilbang ajumma scrub. Although I was terrified of the 'naked party' they continuously cheered to that night, I lightly penciled it into my planner and mentally prepared a list of excuses to furnish a polite cancellation at the beginning of the week. Monday came and went and I forgot to decline the invite. In the midst of teaching on Tuesday and Wednesday I thought of cancelling and told myself I would get to it later that night. Then it was Thursday and it's just not classy to cancel so late in the game. I was hungry but I couldn't eat dinner. I nervously plastered a smile on my face and left work on that night wondering if I would be a different person when I returned the next morning.

"It's kind of like skydiving or bungee jumping." My friend reassured me as we descended in the elevator toward the basement floor jimjilbang. She wasn't helping. "The scariest moment is the first one and after that it's just what it is." Did she know she was giving a pep-talk to a life-long swimmer and lifeguard who, forget extreme jumping, was afraid to do a simple dive off the high dive? I spent a decent portion of each summer as a teenager disappointing the pool patrons who always watched in awe as the lifeguards enjoyed their 5 minute breaks. My male co-workers would bring the laughs with failed attempts at double flips and crazy in-the-air dance moves. Others would gracefully dive through the air and slide into the depths of the deep-end headfirst with ease. I climbed the ladder as well, but once at the top I took a big breath and did a boring pencil dive into the icy blueness. I tried more than once to dive from the 1 meter ledge, but my brain just wouldn't allow it. I liked the excitement of the jump, but I preferred the feeling of being right-side-up on my own two feet. I was in control somewhat, even while falling through the air.

As I stripped down and shoved my belongings into a locker at the jimjilbang I realized something about the scenario playing in my head. I knew one day I would dive from that high dive in NH. It would happen because I knew in my mind I could always return to my hometown pool. I could take my time and practice elsewhere. A few months ago I jumped from a pretty huge rock in Jeju. Maybe this summer when I'm stateside again I will make that dive. I really hope this is true.

But here's the amazing thing about living abroad in Korea: You don't have time to cultivate fears here. If there's something you want to try, taste or see you have to do it in a timely fashion. I know I won't be in Korea forever and because I have so many other places to visit I don't know if I will be back soon. It's one thing to read feel-good quotes about 'Living in the Moment', but it's another to have no other choice.

I got naked that Thursday night and tip-toed from the lockers out to the bath and sauna room holding nothing but a hand towel. I found my friends and submerged in a steaming hot bath as I awaited my scrub appointment. In one corner of the room a maze of showers and stools held a dozen or so older women who meticulously scrubbed and bathed each other while chatting. Small children clutching goggles splashed around in the biggest bath. Single bathers who wished to relax and avoid the social hour could be found in baths with their hair in a towel, their eyes closed and their heads resting on the stone side. As our skin began to prune our moods softened as well. Our eyes stopped darting around the room at all the nakedness and we relaxed. The water was deliciously warm and we hopped from one bath to the next.

When the ajumma called me over for my scrub there was nowhere to hide. As she threw buckets of water over my body and signaled for me to roll over onto my back for the next round of scrubbing I simply did it. Maybe my friend was right, the scariest moment had already passed and the rest was just whatever would be. I walked home that night with baby soft skin and wet hair that reminded me of my swimming years, 3 friends who would always and forever be my 'naked party' girls, an item to cross off my Korea Bucket List and a craving for some grilled kimchi (I skipped dinner, remember?). 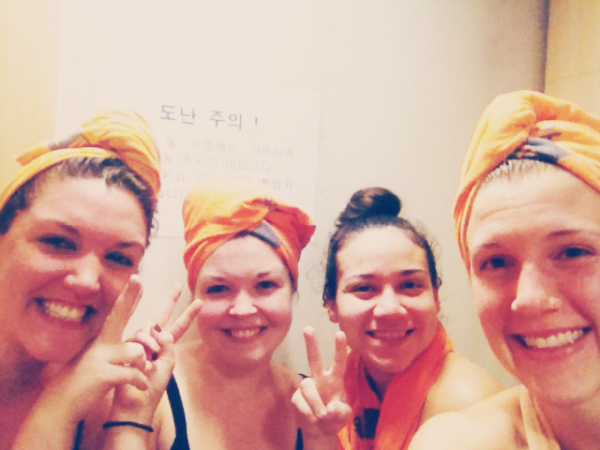 Tags: Korean culture, a year in Korea, Asia, Better in Korea, Activities to do in Korea, Health in Korea, Jjimjilbang, spa in Korea, bath house, Beauty Products in Korea