Want a Vacation While Teaching in Korea? Head to Vietnam!

One of the best things about teaching English in Korea is the ability to travel during your vacations, weekend breaks, or when your contract finishes. I usually spend my weekends traveling around Korea and then use my vacation time for bigger trips outside of Korea. Last year, I went to Taiwan for a week and absolutely loved it. Even though I loved Taiwan, for my next vacation, I knew that I wanted to head to a different part of  Asia and I had my sights set on Southeast Asia. Thus, I began looking at flights to Southeast Asia, found cheap tickets to Vietnam, and decided that is where I am going. I knew I was going to have a good time, I just had no idea it was going to be this good.

First off, Vietnam is an awesome getaway from Korea because it is warm and cheap. Korean winters can be frigid so traveling to a warm destination was vital for my vacation...I needed a break from the cold weather! Second, the flight is not all that long. It took about 6 hours,  but with time change, it will actually be less. Since I only had a week vacation, I did not want to waste a lot of my time in route.

Within that week, I had three destinations in Vietnam in mind. I was flying into Ho Chi Minh City where I would spend a few days, then I would head up to Hoi An, which lies in the middle of the country, and then make my way North to Hanoi for the final leg of the journey. However, once I arrived to Ho Chi Minh City and started talking about Vietnam to some other travelers in my hostel, I decided to leave Ho Chi Minh City as quick as possible and head to Hoi An and Hanoi because there was so much to do in those places.

So I headed to Hoi An and quickly fell in love. Hoi An is an idyllic little town set on a meandering river that gives off an aura of how Vietnam used to be. The city center, which lies next to the river, does not allow cars and everyone has to travel by foot or bicycle. The town is full of historical buildings, awesome restaurants, and a lively atmosphere next to the river. The beach is only a few miles away as well so if you are need of a beach day, it is a short taxi ride away. I would have loved to spend more time here, but Hanoi, and all its activities, was calling my name. 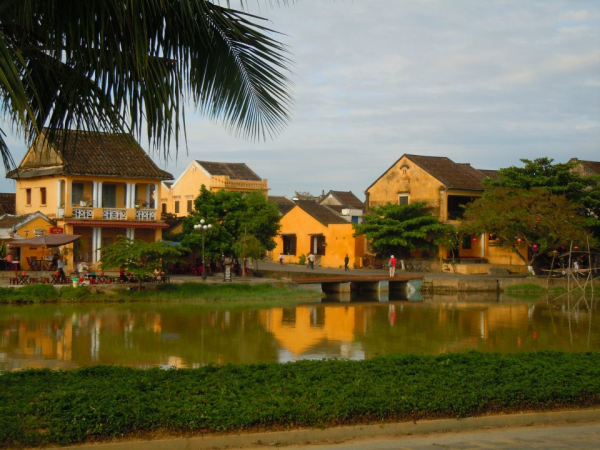 Hanoi is a bustling, thriving city that does not seem to sleep. The amount of activity that occurs on the street is really quite amazing and it just feels like the city, and the entire economy of Vietnam, is booming with newfound growth. In general, I don't mind big, crowded cities, but I would much rather spend my time enjoying nature in the countryside. Fortunately, Hanoi is the jumping off point for two of Vietnam's most picturesque areas: Sapa and Halong Bay. After a full day in the city, I was ready to hit up the countryside.

First, I took a two hour bus ride to Halong Bay. If you have never heard of this bay, then you are truly missing out. Scattered along this section of the coast are thousands of limestone karst formations and small islands that create a breathtaking scenery. Visitors can spend their time boating and kayaking around the formations and islands. For a great experience, I highly recommend spending a night on one of the boats while on vacation from teaching English in Korea.

After Halong Bay, I took a train to the mountainous village of Sapa. Going to Sapa is like taking a step back in time as you get to witness how certain indigenous tribes work and live. While the central town of Sapa is a bit touristy, if you rent a motorcyle, you can get out to the surrounding villages and interact with the locals. Not to mention that the northern mountains in Vietnam are incredibly beautiful and the winding roads make for an exciting ride on a motorcyle.

So many English teachers in Korea go to Thailand at some point during their stay in Asia. While Thailand is really cool and beautiful, why not go somewhere that is a little bit different? Check out Vietnam, I can assure you that you won't be disappointed.