Kiss Me I'm Irish in Korea

I've been living in Korea for about nine months now, and I've absolutely loved it thus far. This being said, I must admit that I was a little nervous about celebrating my birthday while teaching English in Korea, so far away from all of my friends and family. My birthday happens to fall on St. Patrick’s Day, and being from Boston, I’m a little spoiled when it comes to birthday festivities. I wasn’t so sure that Korea could live up to my expectations. I was wrong.

A few of my co-workers had mentioned the St. Patrick’s Day Festival before, but I really wasn’t sure what to expect. So, I woke up Saturday morning, threw on the most Irish attire I could find, and blindly followed them to what promised to be an “awesome time”. It took us about an hour to travel from Incheon to Sindorim Station on the subway so it was a fairly quick ride coming from outside of Seoul. After leaving out of exit one, I could tell immediately that I was in store for a pretty epic day.

There were people EVERYWHERE; young people, old people, Korean people, English teachers, and Westerners all decked out in their finest St. Paddy’s attire and overall just enjoying the day. The sun was shining, children were running around playing with balloons, adults were sipping on green beer; it felt like home. We made our way over to the D-Cube Plaza and I saw for the first time just how serious this festival was. There were hundreds of people, a sea of various shades of green, all surrounding the stage where the emcee and the entertainment were situated. My friends and I were a little late to the party, so we took a seat in the very back of the bleachers on the grass. It was perfect. We were surrounded by so many of our English teacher friends but also a lot of strangers, everyone just talking, laughing and enjoying the show and the company.

There was always something going happening down on the stage, whether it was a gaggle of Korean girls Irish step dancing, a U2 tribute band paying homage to Bono, or games being played for prizes, if you needed somewhere to focus your attention, they were there. 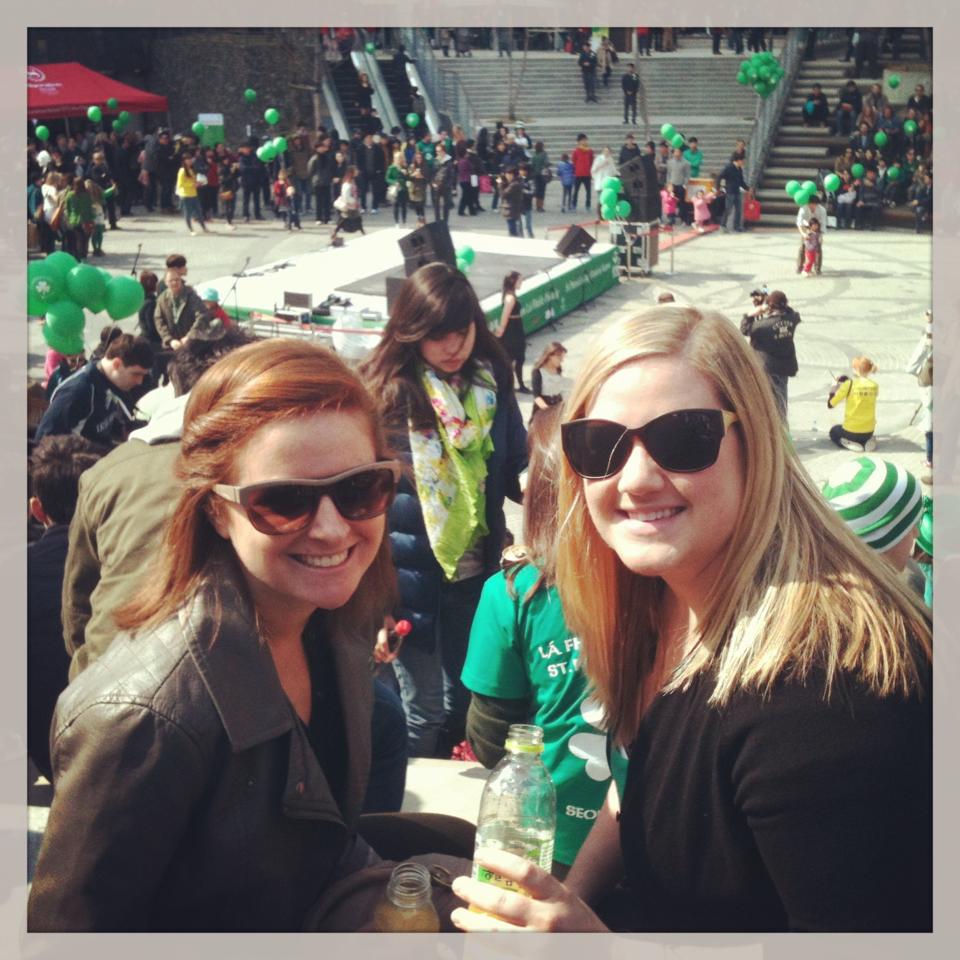 I’m not really sure how long we sat there, lounging on the grass just taking in the scenery, but I do know that the only real reason we left was that it got a little chilly. We ventured over to Itaewon (or as I like to call it, Mini-America) and made our way to the two local Irish bars where the atmosphere was the same it had been at the festival. Everyone was in a good mood, just happy to be around friends, expats and other English teachers, bonding over the tiny bit of Irish that exists in all of us on March 17th.

I can honestly look back on last Saturday and say that I had one of the best birthdays of my short 24 years on this earth. I’d expected myself to be at least a little nostalgic for home, but I didn’t even think about it once (Sorry, Mom). It was a perfect day with some amazing people and I know that for every St. Patrick’s Day I’m in Korea, that is exactly where I’ll be celebrating. Even in Korea, everyone’s Irish and proud on St. Patrick’s Day and it’s an awesome sight to see.

On Monday after all was said and done, the real icing on the cake was the reaction I got from my students. Upon entering my first class, 15 elementary kids, I was greeted with amazing gifts and cards and candies. I couldn’t believe that they had even remembered my birthday, let alone gone to so much trouble to buy me gifts. They were so sweet and so excited for me to open them that it made my entire week.

Overall my first birthday while teaching in Korea was exceptional. I spent an amazing day in the sun with great people, and my students proved once again to be some of the most special people I’ve ever met. So if you’re ever worried about being homesick, just look around, there are literally thousands of amazing people to meet and things to do any day of the year.

Tags: birthday in Korea, St. Patricks day, teaching in Korea, Itaewon, Activities to do in Korea, teaching at Chungdahm