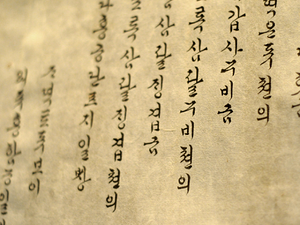 While I was preparing for my one year adventure in Korea in May 2012, my recruiter suggested
that I learn a little Korean and offered some helpful websites.  I knew that learning a few words in Korean would be beneficial to me but my first encounter with the Korean language however, produced so much anxiety, that I was immediately turned off.  “What in the world is this?”  I wondered as I watched stick figures greet each other in Korean.  Many questions filled my head.  I felt overwhelmed and confused.   I shut it off, calmed my mind and went on to do something else.  However, this experience didn’t turn me off to teaching in Korea.  I’ve been living and teaching in Korea for ten months already and though this is my second attempt at learning Korean, I’ve just about finished the alphabet and I am excited!

My first attempt at learning Korean, was with a group called ATTI.  I was stopped on the street by a Korean woman, Jamie.  Jamie told me (in English) about the organization ATTI and that they were starting a Korean class for foreigners.  She also gave me a few helpful tools including, a bus schedule of the local buses.  They also have monthly outtings and cooking class that try to incorporate the use of the Korean language. The cost of the class was relatively low (25,000 KRW) per month and of course the book which was another 18,000 KRW.  I was semi-excited, but after I realized that the pace was a bit much for me to keep up, I lost interest and dropped out about three weeks later.

I learned that City Hall was sponsoring a Korean class for foreigners in early February and I was urged to take the class because 1. it was being offered free of charge and 2. It would be helpful to me.  The only cost would be the cost of the textbook, which was 29,000 KRW.  I followed up and started March 19.  I opted for morning classes as I work in the evenings.  However, evening classes were also available for public school teachers who work during the day.  My class has about 8 students, most of whom I know.  In the beginning, I had a lot of difficulty learning the Korean alphabet, which is made up of 24 characters, consisting of consonants and vowels.  I’ve noticed that some letters looks like English letters and even numbers, maybe that’s why! My students are well aware of who created Hangul and it it’s with pride that they’ve told me about King Sejong.  It was developed in the mid 1400’s by King Sejong, the Great.  It is used both in North and South Korea and apparently, some of the letters were formed due to the shape the mouth makes while making the sound.  To learn more about hangul, go here .

It’s been two weeks since I started my Korean class at City Hall in Pohang.  City hall is a 15 minute bike ride from where I live in Edong.  Like my Chungdahm classroom while teaching English in Korea, the classroom is clean and very comfortable.  As part of Pohang's wanting to welcome the foreign community, we’ve also been given permission to use a recreation room at City Hall.  This room is equipped with two desktop computers and a printer.  It’s also furnished and well decorated.  Last I heard, an art group in Pohang will be painting murals on the wall very soon.  I hope to take part in this.

This week, we’ll have our first test.  Wish me luck and start your application today to have your own adventures teaching in Korea!