Welcome to Chungdahm! 5 Things You Need to Know!

A new job is always simultaneously exciting and scary, but especially so when your job is on the other side of the world. After working at Chungdahm for the past ten months, I’ve picked up one or two things that you can expect to encounter while teaching English in Korea that I wish I’d known before. So, allow me to be your Chungdahm spirit guide. Here’s what you should know:

Once you’ve arrived in your new home you’ll undoubtedly go and see your new branch. Your branch will have both Western staff and Korean staff, which is extremely helpful when it comes to dealing with your students. One of the most important things to understand about your new job is that in Korea, the expectations of a branch’s employees may be different than what you are used to in the Western world. At my branch, for example, my branch manager is a nice and reasonable man, but at times he can be rather short with his staff and can seem as if he’s very upset.

II   I’ve learned that this is usually a combination of two things: the language barrier and the culture in general. In America there are so many rules and regulations on how a manager can deal with their staff, what they can say, and what they cannot. This is not the case in Korea, typically your boss wants you to do your job right and there’s little room for excuses if you don’t. This is not them being rude, this is simply a part of their culture different from what you are used to. While it may seem like they are berating you, they are just trying to deal with the situation the best way they know how, and after a while you will get used to dealing with your problems in a semi-Korean semi-Western manner. Of course this is not the truth for all branches and in some I’m sure there are no problems with communication or expectations versus reality, but be prepared to adjust your idea of an employee/employer relationship slightly upon arrival just in case.

I know one of the most stressful concepts for a new Chungdahm teacher to come to grips with is the idea of being watched on CCTV and this is completely understandable. The idea of having your boss watching you teach every day seems horrifying, but it’s really not that bad. In most cases yes, you will be watched a bit more heavily during your first weeks, but eventually they will relax and watch you less. Mostly your branch manager and head instructor are just making sure you can handle your classes and that you are getting through the material. If you are having an issue you won’t be thrown out on the streets either, they are here to help you and while constructive criticism might not be your favorite thing to hear, it will make you a better teacher. At my branch I know that my head instructor checks in on each of us weekly, surveying some of our classes and then giving us feedback if there are any issues or if he feels we are doing exceptional work (Victory!). After a while CCTV will stop being such a scary concept and actually become a tool to help you teach better. Some branches require you to watch your own CCTV or your coworkers at certain times in a semester and this really helps too, changing your perspective in the classroom can open your eyes to a lot of things you didn’t see before.

Your first day of teaching is going to be nerve wracking, that is a given especially if like me, you’ve never taught before. It’s going to be okay though, you are definitely going to survive. You just have to understand some certain realities of the job.

First, these kids are TIRED. As I stated earlier the work ethic in Korea is intense and these children are under a lot of pressure from their parents, their schools and just society in general to be the best. As you can imagine this is exhausting and stressful for them. These children are constantly being watched and instructed and I know that if that were me, I’d feel a little hopeless too. So if on your first day you walk into the classroom and you see a bunch of stone faced little zombies staring back at you, don’t worry, it’s not you. These kids have just gotten through a full day of school and then typically have come straight to academy. They haven’t really even had a moment to breathe so of course, their energy level is low. Do not worry, this will change. Once you’ve gotten into a routine and built up a rapport with your class it will be completely different. Just like with any new relationship you need to warm up to each other.

This is also why it is so important for you to bring the energy to your classes. You need to be positive and vibrant and bouncy because otherwise, you might start to sink. For your first days of class definitely use an icebreaker like “Two Truths One Lie” or even just asking the kids to tell you something about themselves, anything that starts a dialogue is good and let’s face it, we all like to talk about ourselves. And don’t ever underestimate the power of cold calling. These kids are tired and they want to zone out but cold calling ensures at least some semblance of attention is being paid. Just be patient with them, they’re sleepy for good reason, and you would be too.

Other things I’ve found to work while teaching in Korea are point games: separate the kids into groups, award points for correct answers, transitions, etc. Korean culture is competitive, so these kids are more than ready to go head to head for some sweet victory. Just be careful, they can be fiery little creatures and arguments will ensue. I typically give the winning team a homework cut or candy, but you should make sure this is okay with your branch first. 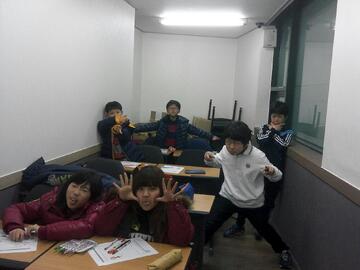 Oh Korean children, what can I say about you that hasn’t been said before? You’ll quickly come to learn that these kids are amazing individuals. They’re like tiny high functioning adults with some amazing clothes and a wicked sense of humor. This being said, they will quickly become your biggest critics. These kids have literally no filter, if a thought makes its way across their brain, 99% of the time it’s going to come out of their mouths. Korean culture isn’t as sensitive as other cultures and brutal honesty is just something that is an integral part of their lives. If I had a 1,000W for every time I’ve heard, “Teacher, you look so tired today.” or “Kara Teacher, your hair, I do not like it curly.” I’d be filthy stinkin’ rich. So a word of advice, leave your sensitivity at home and toughen up a bit because they’re going to comment on things you wouldn’t expect to hear from a student. It’s just how Korean culture operates, both children and adults. But with the bad comes the good and compliments aren’t hard to come by either (they can actually be the sweetest kids in the world at times!), you’ve just got to understand they aren’t going for the jugular; they’re just keeping it real. 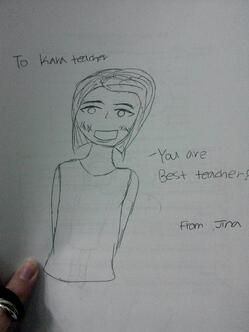 In the same vein get ready for some personal questions, these kids are NOSY. “Teacher are you married?”, “Teacher do you have babies?”, “Teacher how much do you weigh?”, “Teacher, are you rich?”. While teaching in Korea, your students are going to want to know literally everything about you, which is kind of flattering and also kind of invasive. I’ve just started making up the most grandiose lies I can think of. Like that I have ten husbands all over the age of 60 or that I was a backup dancer in a Beyonce video one summer. I’m not really sure how much they take of it as truth, but they get a kick out of it anyway. 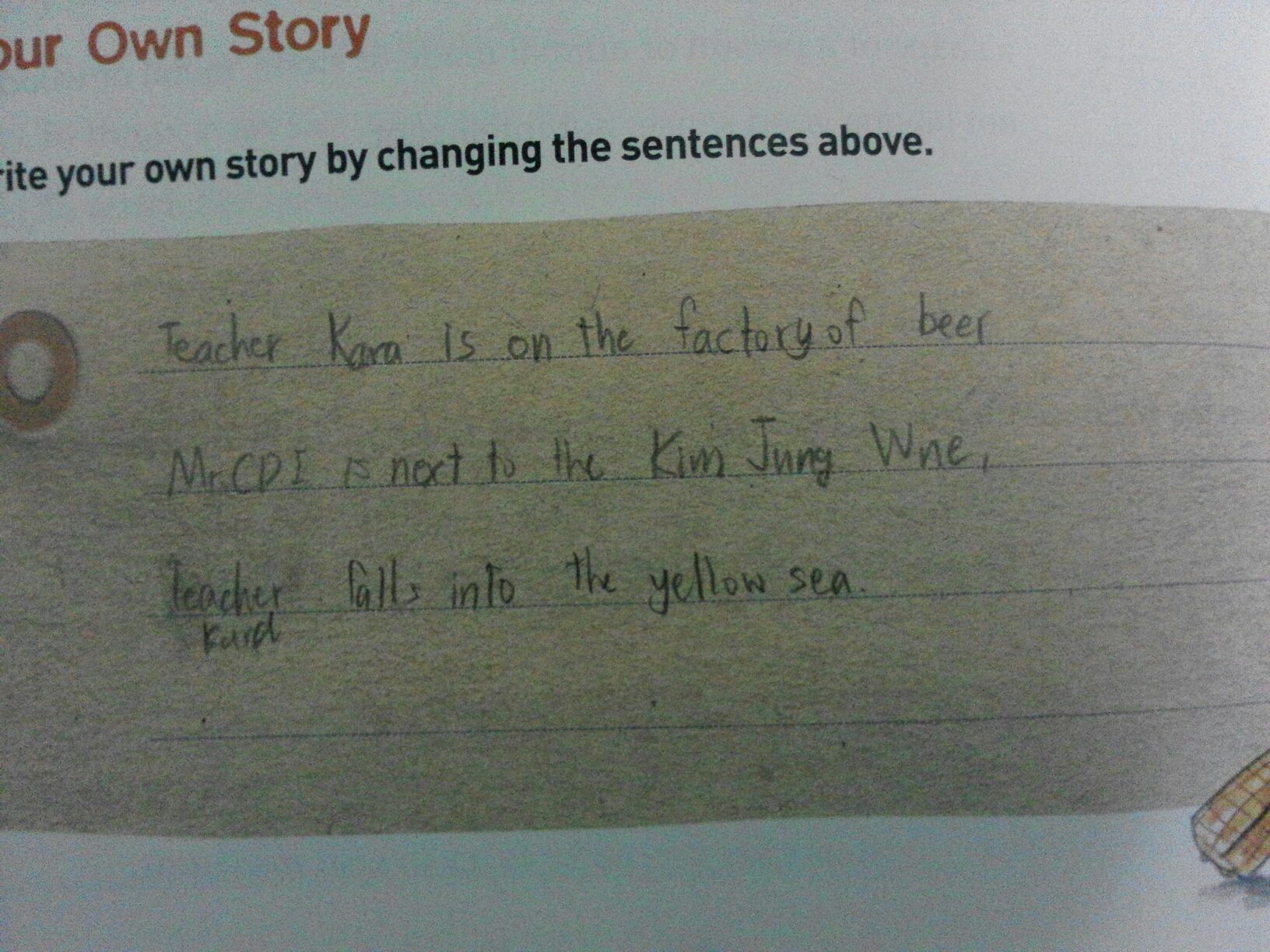 The age that you teach in Korea will depend on whether you work for April (babies) or Chungdahm (babies – teenagers). You will quickly realize, especially in your female students, that looks are a very important part of their lives and as a result they are a little obsessed with them. It’s not unusual to see your students combing their hair, using a hand mirror, or heavily applying lip-gloss right in the middle of your discussion on Teen Diabetes. While it’s a relatable situation, you have to let them know that is not acceptable in your classroom. One minute it’s a lively dialogue on the slave trade, the next it's Vidal Sassoon. So while looks in general are important to them and they are just operating on what they think is normal, let them know in your class it’s outlawed. I usually just tell them their gorgeous naturally and that G-Dragon or Nick Jonas would be lucky to call them their girlfriend.

Also, in Korea boys and girls are archrivals until they are about 14 (much like in America) but then some of your classrooms will turn into their own mini-Korean soap operas full of torrid love affairs. While it’s cute and extremely entertaining, it gets taxing if you let them get away with too much flirting/drama so make sure you draw the line somewhere.

For the Ladies: In Korea its not unusual to see girls rocking the SHORTEST skirts and shorts you have ever seen, that is their fashion industry and hey, they look good. But be aware, cleavage is simply not something you see here, even a little can be considered too much. Just keep this in mind when dressing for work, things you would wear to work back home are things that might be considered a bit too risqué for your branch. My advice: camisoles and lots of them. Bearing your shoulders can be considered inappropriate at times but I think this is changing more and more with the times, just cater to your audience and dress for the occasion.