This was something I was worried about before I came here to teach English. How will I get around? Will I be stuck in my city? Will I need to buy a bike or scooter? Can I live without a car?? I’m from Southern California, where the entire public transportation system consists of about 5 buses and a donkey-pulled trolley. I had no idea that public transport could be as efficient as it is here in Korea. It’s one of the many things I am going to miss when I leave.

So let me lay out for you the 4 major transportation options you’ll likely use to get around in Korea. 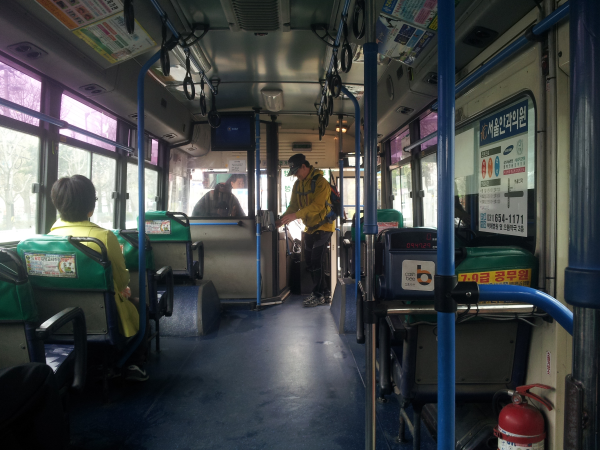 Although you’ll see all kinds of buses, I only use two kinds: city buses and long distance buses.

City buses are ridiculously common where I live. It’s a normal day when I see five of them lined up at a stop light. I never wait more than five minutes for one. However, I am lucky in the fact that I can take any of the city buses to the downtown location that I frequent because I live along a main road that feeds into the area’s main bus terminal. Were I to need to catch a particular bus number, I still wouldn’t have to wait very long.
Each bus ride is about $1, and they are lots of fun! I can’t count the number of times the bus driver has guided the giant vehicle onto the wrong side of the road to get ahead of a slow truck. Once, I and the other passengers gave out a collective gasp as the driver swerved in and out of opposing traffic to keep on schedule. Despite these antics, I've never seen or heard of a major accident involving a bus. (Did I mention it’s legal for city buses to run red lights?)

Long distance buses are ones that look like tour buses. They are very tall, comfortable and a bit more expensive. I use them to travel from my city to the airports, which are two hours from me. I also occasionally take one to Seoul, which is about an hour away. You’ll pay roughly $5 per one hour of travel.
Most cities, even small ones, will have a bus terminal. My city has two. One is dedicated to buses that only go from my city to Seoul Express Bus Terminal. These buses leave every 20 minutes and cost $5. The second terminal has buses that go to just about every major part of Korea. The cost depends on the distance.

Navigating the extensive bus system can be easy at times and difficult at others. To use a long distance bus, just know the name of your destination and buy a ticket for it at the window. City bus maps are harder to use. Ask a Korean coworker for help with them. 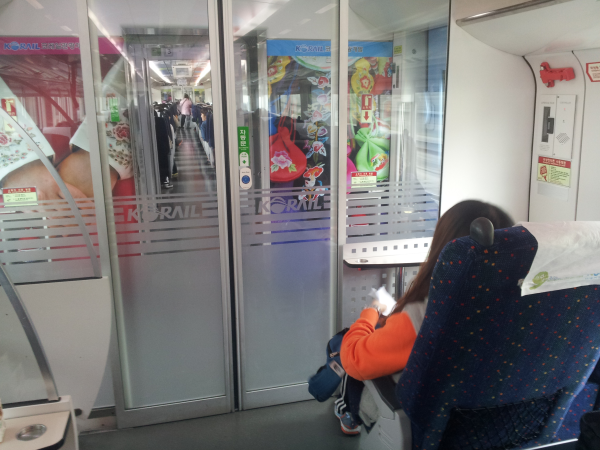 2. Trains
South Korea has a very good railway network. I take a 45 minute train ride into Seoul just about every weekend. There are usually multiple trains running into Seoul from my city every hour. A ticket will cost from $3 to $6, depending on the train type and if it’s a seating or standing ticket.
If you take a train during the week or at an unpopular hour, you can buy a ticket with a reserved seat. However, when I buy a ticket an hour before a train departs on a Saturday morning, all the seats are sold out. So I go to the café car, which should really be called the cattle car. I often take the last train out of Seoul on a Saturday night. And so does half of Korea. It gets cramped. But I get home.
Buying tickets is easy. The KoRail staff at the ticket windows usually speak OK English. And if you’re running super late, you can board the train without a ticket and purchase one from the conductor. There is a small fee added on, if you do that, however.

One of the few major drawbacks about Korean public transportation is how early it shuts down. The last train leaves Seoul Station at 10:45. If you’re still in the city after then, you’re either taking a taxi home, or you're staying in Seoul for the night.

There are technically 4 kinds of trains, but 3 of them are virtually identical in function and form; they are just normal trains. The fourth, however, is Korea’s high speed train: the KTX. I took it once from my city to Busan, which is the second largest city in Korea and located at the southern tip of the country. It takes the a normal trains about 4 hours to get to Busan. The KTX cuts that time in half. It’s a cool ride complete with snack carts and attendants that bow when they enter and leave a train car. The KTX is also double the price. 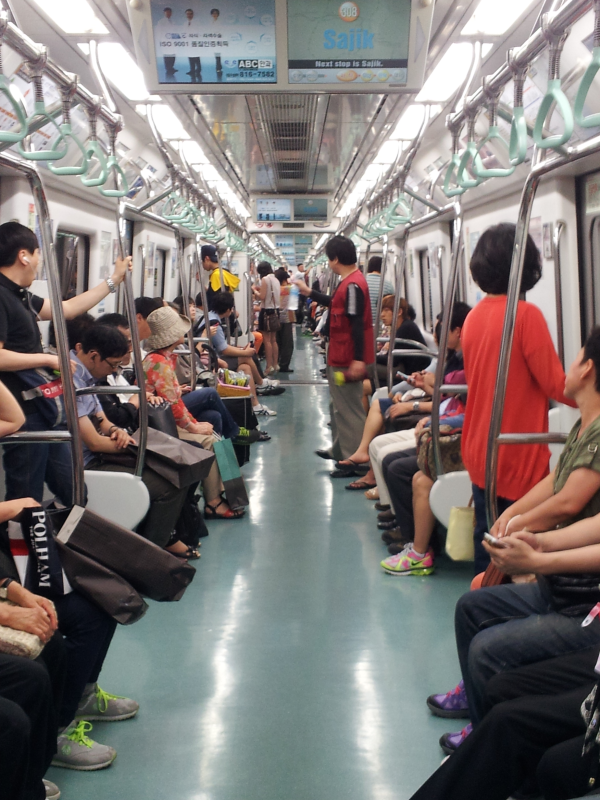 3. Subway / Metro
Seoul’s metro or subway system is the largest by length in the world. While teaching English in Korea, I live 2 hours away from the heart of Seoul by subway. And the tracks extend even farther than my city. It’s possible to get almost anywhere within Seoul by subway. It’s also possible to get to many places outside Seoul by subway.
The best thing about Seoul’s metro system is how easy it is to navigate. All the lines are owned by the same entity, so there is no hassle transferring from line to line. (The same cannot be said for Tokyo, where 3 different companies own subway lines.) There are many signs and maps in English to help you find your way. and the cost is reasonable: it's about a dollar per ride.

I’ve used the subways in New York, Taipei, Tokyo, and Seoul. Seoul’s is the easiest and cleanest. If you’re going to live anywhere near Seoul, you’ll be thankful for this great system. 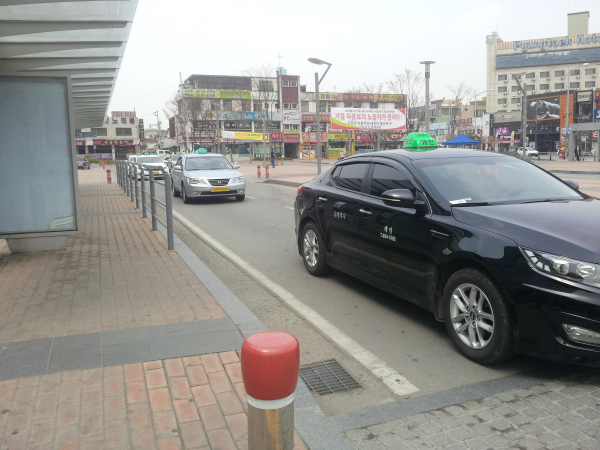 Surprisingly, I’ve used taxis quite a bit. They’re not exceptionally cheap, but they’re not exorbitant either. The starting base fee is about $2. After about 5 minutes you’ll rack up another $2. But that’s as far as I usually take a taxi. They are faster, more direct, and abundant.
The hardest part is giving directions. Once, some other English teachers and I wanted to go across Seoul, and we opted for a quick taxi ride. We mistakenly let our friend with a thick Irish accent tell the driver we wanted to go to Hongdae. After 20 minutes and several too many dead baby jokes, we realized we had been in the car too long. When we inquired with the driver, he says, “ OOHH! HONGDAE! [then something we didn’t understand in Korean] BONGDAE!!” He then turned the taxi around and began heading away from Bongdae and toward Hongdae.

All in all, you shouldn’t have trouble getting around if you decide to teach English in Korea. Transportation is cheap and available. It’s even pretty quick! After leaving my friend with whom I had lunch today, he sent me a Kakao text message. It read, “Great seeing you, buddy!! Thanks for lunch. Oh, and the bus came instantly.”