One scary thought that crosses many minds when thinking about risks of teaching English abroad is “what happens if I become seriously ill or injured, and I cannot communicate with doctors effectively?” Well in South Korea, you’ll be fine. You’ll be more than fine, actually. The health care I received a couple weeks ago was incredibly quick, thorough, and affordable.

A little while back, my stomach began making some odd noises. I found it amusing and decided it had gained sentience. So instead of thinking I was ill, I just carried on conversations with it for the day it was trying to communicate with me. At some point, I must have said something wrong, because for the next few days my bowels were extremely uncomfortable.

I eventually decided to visit the local hospital. It’s only a ten minute walk away. I haven’t seen any large hospitals in Korea. They all seem to be small clinics or like the one I went to: Good Morning Hospital, which is about 5 floors with a parking lot that can fit maybe 150 cars. 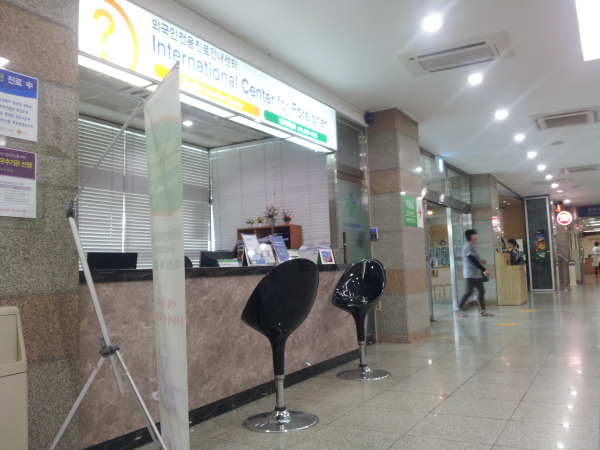 Upon entering the busy lobby, I immediately noticed the English Service Desk. The Korean receptionist was very polite, and her English was very good. After telling her my symptoms, she told me that the gastroenterologist would see me shortly. I sat down for 5 minutes. 5 minutes. I made no appointment, but I was able to see a doctor 5 minutes after arriving. I was not receiving special treatment. The hospital was not experiencing a slow spell. On the contrary, it was bustling on this Friday afternoon at 1 o’ clock. Korean healthcare centers are simply incredibly efficient. Also, unlike America’s, Korea’s healthcare system isn’t a cluster Illletyoufillintherest.

It turns out, there is more to my lovely receptionist than meets the eye. She doubles as my escort and triples as my translator. I paid no extra fee for these services. She ushers me upstairs and down the hall to a doctor’s office that holds nothing but a desk, chairs, computer, family photos, and examining table. After conveying my symptoms through my personal translator, the doctor orders  two blood tests, two xrays, and an endoscopy.

My first thought was that I’d be at this hospital all day or all week. As it turns out, I would end up being there a total of 2 hours and 15 minutes. And I would leave with all the results from each of the tests. Amazing.

My second thought was “I don’t have insurance! How much will this cost?” As an hourly employee, I am not entitled to health insurance. But luckily, I wasn’t at an American hospital. I’ll reveal the significant price difference between America and Korea as I narrate the day.

First were the blood tests. She walked me straight into a room with four chairs. There was one available. I sat down and put my arm out. The lady on the other side swabbed me, poked me twice, sucked my blood, and sent me on my way.

From there we went downstairs to radiology. As soon as I sat down to wait, a radiology room became available. The gentleman spoke some English and gave instructions as my lady friend waited outside. I got two xrays of my abdomen in about 5 minutes. Then we went back upstairs for the endoscopy, which is where they put a camera down your throat to look at your stomach. It can be considered a minor surgery because they put me to sleep for it.

The blood tests cost me $200 dollars. That is on par with costs in the states for the particular blood tests I had done. The x-rays, however, cost me only $75 combined. In the states, just one abdominal xray can cost anywhere from $250 to $440 each! Just with these tests I saved more than $400 by being in Korea.

Tune into next week’s blog for the second hour of my day at the hospital. I’ll reveal just how much more I saved just by being in Korea. It’s a lot.