Arrrreg You Ready to Be A Pirate? Pirate Party Cruise in Busan, Korea

If you had asked me when I first came to Korea, about my ideal night on the town, chances are I would not have mentioned dressing up as a pirate. A couple halloweens ago, I decided to dress up like a pirate, eye patch included. I had a rip roaring good time and longed to don my pirate garb once more. But I couldn't repeat costumes every halloween! So, when I heard about a pirate ship party in Busan, I was pleasantly surprised and more than ready to jump aboard. 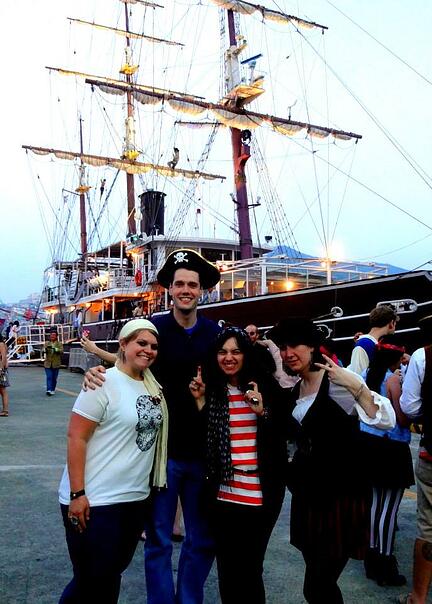 I reserved my seat straight away (only $39!). Which was a great idea, because this ship sold out before I even found the appropriate striped shirt and head scarf. The voyage was created by a group called Pusan Pirates, who set up a booze cruise around twice a year. Last year there was a ship for Halloween, but it was incomparable the Pirate Ship. I heard there was a lot less people, and it was a lot less fun. I found the Pirate Ship Party through their facebook event, and reposts from the 292 people who signed up online. They were pretty much all English teachers, westerners, and people who can frequently be found at the bars where everyone met up to load the buses, Sharky's in Haeundae and Thirsty Moose in KSU.

There were two separate limo buses scheduled to take pirates to the ship, and, because of the sheer number of hearties (around 200 people), our buses arrived a little late. However, this allowed us plenty of time to stock up on snacks and other food and drinks from the mini-mart under Sharky's to bring onboard. There was no food on the boat already, but there were 10  kegs of premium microbrews brought onboard curtesy of Big Rock Brewery and unlimited rum and cokes. Plus some pirates were convinced the ship would run dry, so everyone brought their own booze as well. Really though, it was not necessary, everyone got more than enough to drink.

As we thundered off the limo buses, we were excited to see that our vessel awaited us! The boat itself was definitely a pirate ship, complete with fake pirates dangling off the sails. The real pirates, us, were eager to board. There was even a man dressed as a parrot! Once onboard we found that there was plenty of space for everyone to swordfight both above board and below decks. 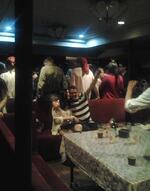 There was live music, a lot of dancing, some water gun battles, and the night sail around Busan waters was glorious. There were also prizes for best pirate and best pirate team! The guy in the parrot suit won for both. He kept in character for the whole cruise, and had a fantastic squawk. It was a two hour cruise, but it ended all too soon. Luckily pirates were welcome back onshore for after-parties, and free drinks at several bars. I returned to land with, not only my headscarf, but an eye patch, sword, and pirate hat as well. If you think you can have a terrible time on this party ship, frigate about it! I can't wait for the next ship to arrive!

After graduating from Emerson College with a BA in Writing, Literature, and Publishing, Ariel Rosen looked back on the semester she spent traveling around Europe and decided she must explore Asia. Her teaching job with ChungDahm April in Busan allows her to experience South Korea firsthand and with the bright enthusiasm of all the children she teaches. She is overjoyed to share a class with them and finds herself learning more from them and the bright beach city around her everyday.

Tags: what to do in korea, fun days in korea, busan, fun, Activities to do in Korea, nights out in Korea, pirate, ship, sea