Discipline, classroom management, herding chickens- however you want to look at it, maintaining control of your classroom can be a daunting task. Oh sure, there are those classes that you could swear have been hit with a tranquilizer dart and you long for any interaction whatsoever (talkin' to you, 7pm Birdie!), and others who roll along just beautifully because of good classroom karma. But sometimes, whether it's just one student or the entire gang, a sweet verbal reminder (or twelve) doesn't get the job done, and you need something a smidge more effective. What's a teacher to do? Take the advice of this girl! Teaching middle school for eight years in every school setting imaginable hasn't made me an expert, but darned if I haven't discovered some key points about discipline along the way through multiple epic failures. Learn from my pain! I sure did. 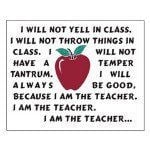 1. Set Your Expectations and Be Consistent

Kids won't know what you expect of them if you don't tell them. It's important to start the term off with written expectations on the board and then discuss each one, making sure they understand exactly what you expect. A lot of CDI students have been enrolled for at least a year. That's a lot of different teachers with lots of different ways of running a classroom. Putting their cell phones in a basket on the teacher's desk, for example, is a mainstay rule at my branch. So in my first class, I wrote "Please put your cell phones in the basket" on the board the first day of class. And they did. Hooray! But then, at the end of the class period after their respective CTP group was finished presenting, they grabbed their phones from the basket on the way back to their seats. And I immediately realized I hadn't set the expectation that they were not to collect their phones until they were leaving for the day. Frankly, I'm sure they knew they were supposed to leave them in the basket, but I'm their new teacher.

Your students are going to try things and see if it flies with you. Silence is permission in a kid's mind, it seems. That's why being consistent is tiring. You have to stay on them and reiterate your rules through your behavior. The one day a student grabs their phone and you don't say anything is the day that student thinks they've just changed the rule. And all you were thinking is, "Dude, whatever, take your phone, I know you won't play on it, I feel like an ogre constantly correcting you, it's fine." But then another student sees this and thinks "well, if she's gonna get her phone, I'm gonna get mine," and then another, until you have a snowball effect that, when you try to stop, you're greeted with cries of "but you let HER do it!" Sigh...

Having said that, you have to decide what's important and necessary for you to run a successful class. I have a touch of ADD (don't we all), so my tolerance for noise while I'm teaching, on a scale of 1-10, is about a negative seventeen. My students know that while I'm teaching or anyone else is talking, they are to listen respectfully. No tapping, humming, talking, shiny objects, nothing. They can, of course, participate and call out answers, but that's in my class. One of my coworkers has no problem with ambient noise and her kids are learning just fine, and another has zero tolerance for students calling out answers. My point is, do what works for you. If your branch doesn't have a rule about cell phones and you're okay with the students leaving them in their backpacks, go for it. I let my students use their phones as dictionaries during CTP. They know the expectation and that their privilege will be revoked if I see them on games or Kakao. Which brings us to point #2:

I know I'm about to blow your mind with this profound revelation, but kids have no freedom. They are told what to do all day long and really aren't in control of their lives. I realized early in my teaching career that if I could get my 6th graders to understand that they have choices with their behavior, and those choices garnered either rewards or consequences, hopefully that would reign in some of the discipline issues I was having. And I understand that this is an academy and it isn't a traditional school setting, but boy, has this worked for me!

I was given Mega Memory this term because "this is a hard group of kids and we know you'll have them reigned in around the five-minute mark." Okay, translation, "buckle in, Jen." So I employed my standard expectations and consistency racket and smugly patted myself on the back for a successful first week (ah, silly rabbit, when will you learn?). And then week two hit. Between the very special dynamic of 7th-grade boys in general, a new student joining the class that was friends with three of them, and the novelty of a new term wearing off, students were getting out of their seats, I was being talked over, conversations were happening in Korean all over the place, dogs and cats were living together- it was mass hysteria!

Okay, not really, but I was shocked at how quickly the tide had turned. I started our fourth class together with a new seating chart and the new rules written on the board. Breaks were privileges to be earned. Shouting and calling out, interrupting my teaching, getting out of your seat, and side conversations in Korean were grounds for getting your name on the board. That was the warning. The second time was a check mark by your name and no break. The third time got your name circled and a trip to the front desk (I had the support of my director for all of this, by the way). That day, I had three names with check marks on the board. By the end of class, we were watching the Danofest parade out the window because they'd done so well third hour. By the next class, the board was empty. Yesterday, I congratulated one of the most challenging students on his awesome attitude and behavior and told him to keep it up so he could earn his reward of a new seat (he's smack dab in front of me at the moment). That same day, the class earned five minutes of chat time at the end of class because of their behavior. Now, I also removed a student yesterday for throwing his workbook across the room, but hey, more good than bad, I'd say. It's trying, yes, but yesterday this same class and I laughed and joked our way through the lesson. Major victory all around. And that brings me to my final thought:

It's vitally important to establish relationships with your students as soon as possible. Kids have to know you care about them, not only for the obvious reasons, but for the positive effect it'll have on their behavior. I ask my students about their day or how they're feeling as I'm checking homework. I use humor whenever I can and try to engage my students with silliness. We tease each other (gently and respectfully, of course :)). I let little things go and try to remember they've been in school all day long and quite possibly in another academy before I see them. My ringleader student in Mega always offers "handsome boy" when I ask them to describe the pictures in the word map. So yesterday, I beat him to the punch, asking what they saw in the picture and then immediately said, "handsome boy, of course" and wrote it on the board. He grinned broadly and the class laughed along with me.

I'm also a big believer in consistent, genuine praise. I especially look for positive things I can praise about those students that are struggling with their behavior. Correct answers, good reading, high test scores, following expectations, and anything else that I can give an "atta boy!" to, I will. And every day is a new day. I smile, welcome them, and tell them how happy I am to see them. Because it's the truth. It's why I do what I do, and why I've done it for so long. My greatest joy is in the relationships I've formed with my students over the years, and to be able to do it in this setting, in a new country on a new continent, is just overwhelmingly awesome.

Jennifer Coy is a proud Austinite (that's Austin, Texas, y'all!) who graduated from The University of Texas at Austin with a degree in psychology and received her Master's degree in education from Texas State University in 2004. A lifelong actress and singer, Jennifer spent eight years teaching 6th grade social studies and language arts before deciding to embark on a new educational path. She now lives and works in the beautiful beachside city of Gangneung, South Korea, where she spends her time exploring, learning, and still singing every chance she gets.

Tags: teaching in Korea, Korean students, funny moments in the classroom, Activities to do in Korea, teaching at Chungdahm, CCTV