This past weekend, I was excited to be able to cross another destination off my ever growing Korea Bucket List: Namiseom. This gorgeous, half moon shaped island has always looked appealing with its famous tree-lined paths and photogenic surroundings, so some fellow English teachers and I took full advantage of its proximity to Seoul and took an excellent day trip to the island! 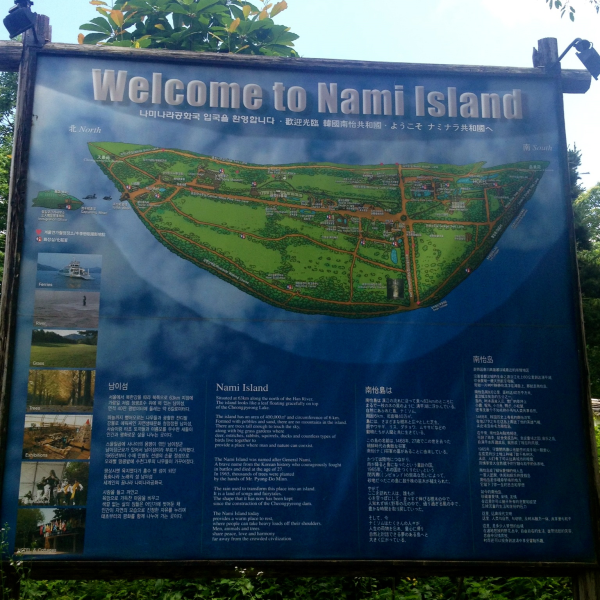 Before I get into the details of the trip, here's some quick background history on the place: Nami is an "island" in Chuncheon, formed by water from the northern Han River when the Cheongpyeong Dam was built in the 1940s. It gets its name from General Nami, of the Joseon Dynasty era, whose tomb is located on the island. After its creation, it was basically reforested and landscaped to become the tourist destination that it is today. It was also used as a filming location in some popular dramas, the most famous being "Winter Sonata" in 2002, which dramatically increased the tourist traffic. In 2006, it declared itself a "self-governing country," issuing its own currency and requiring a "visa" (aka a ticket) to enter.

Our trip began at 9am, since we were headed in from Incheon. We met up with one friend at Yongsan Station in Seoul, where we were going to be catching an ITX train so we could make better time out to the Chuncheon area. You can get there via Seoul Metro, it just takes longer. The scenery as we headed into the mountainous countryside was gorgeous: 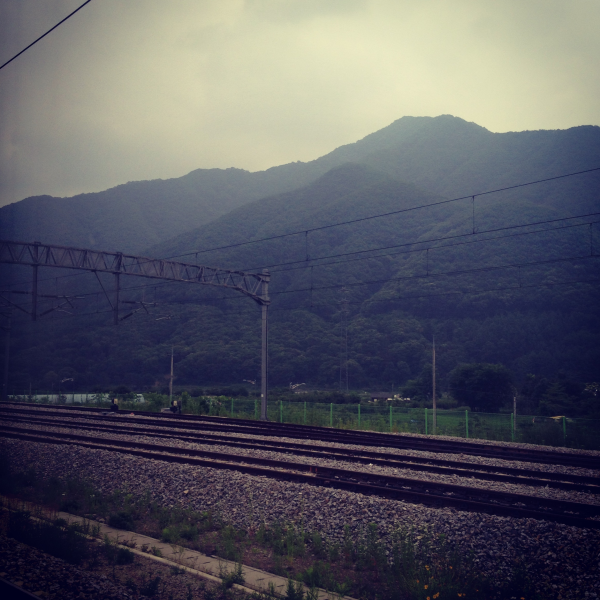 Mountains from the train window, somewhere between Seoul and Chuncheon.

After an hour on the ITX from Yongsan, we arrived at Gapyeong Station, where we waited for the other half of our party to arrive. Since we had time to kill, Corey, Riyas, and I decided to grab some lunch. Chuncheon is known for originating one of my favorite Korean dishes, dak galbi. So, obviously, this is what we had to eat. Luckily, about a billion dak galbi restaurants were right down the street from the station. 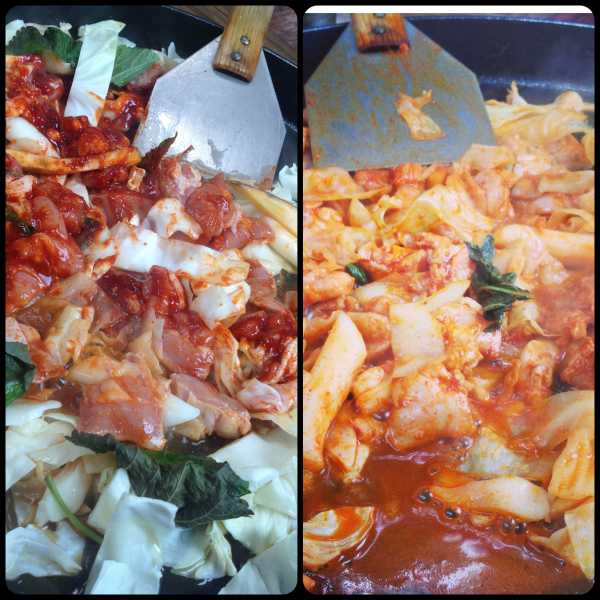 Before and after. So. DELICIOUS.

After lunch, Kellie, Chris, and Neo had made it to Gapyeong, so we all flagged down some cabs and headed to the ferry terminal for Nami. Walking to the ferry was a possibility, which would have taken about twenty mintues, but the cab ride was fine as well -- only about 5 minutes in medium traffic and under ₩3,000. From there, it was time to buy tickets and board the ferry! 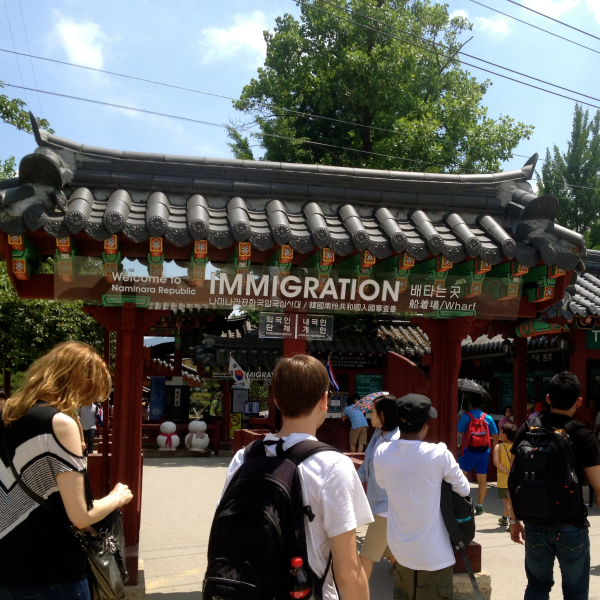 "Immigration" to the Naminara Republic. Note: They do ask to see your passport or Korean ID card before buying a ticket, though I imagine it's just part of the gimmick. 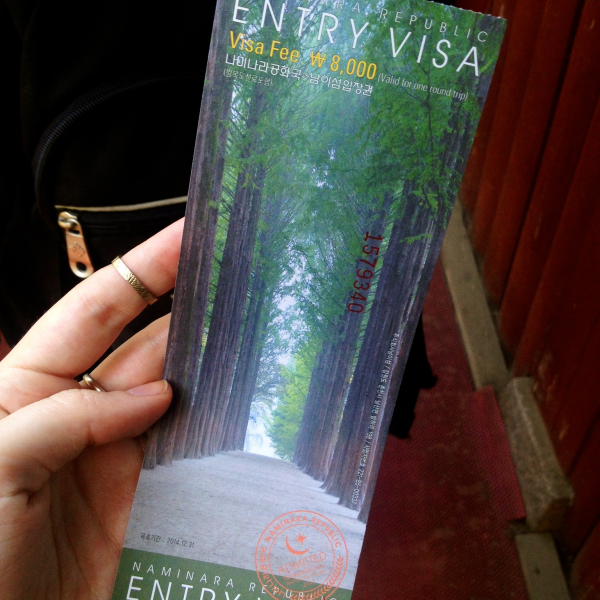 In case you don't fancy taking a ferry to the island, you also have the option of zip-lining over there for ₩30,000, which is definitely on my to-do list, possibly for the next time I go to Nami: 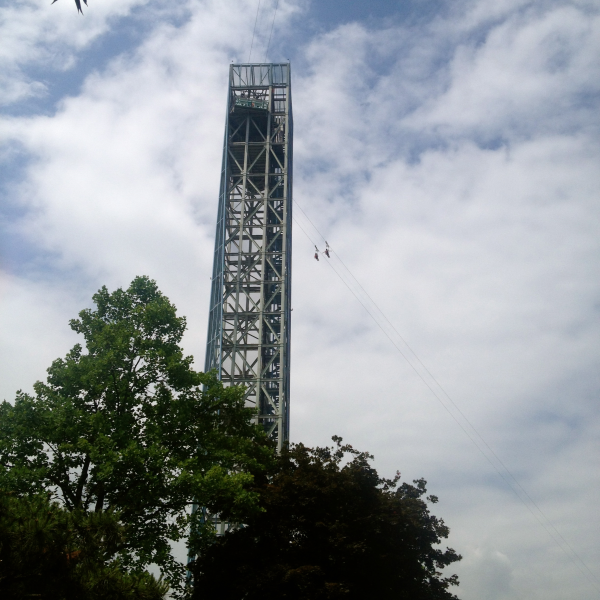 Yes, those tiny dots are people.

The view from our side of the ferry.

After a ferry ride that took less than five minutes, we were dropped at the "port" and set off to wander aimlessly around the island! The scenery is so beautiful -- this post is definitely more image-heavy than most because I couldn't stop taking pictures. So, heads up, and also, sorry I'm not sorry. 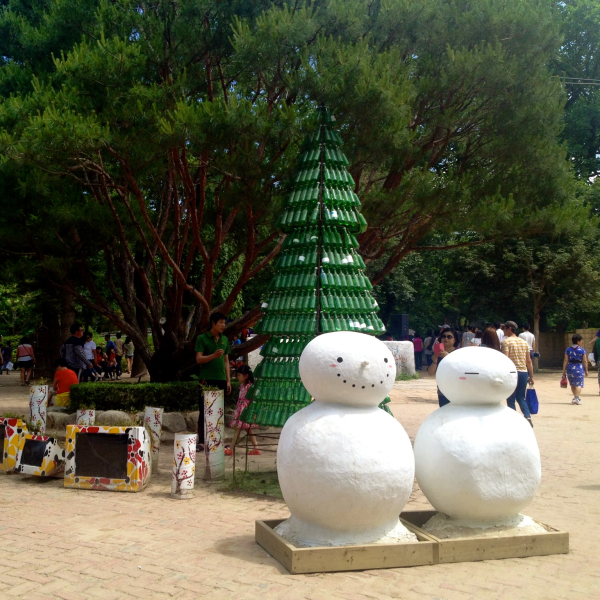 The snowmen from "Winter Sonata" and... a soju bottle tree? 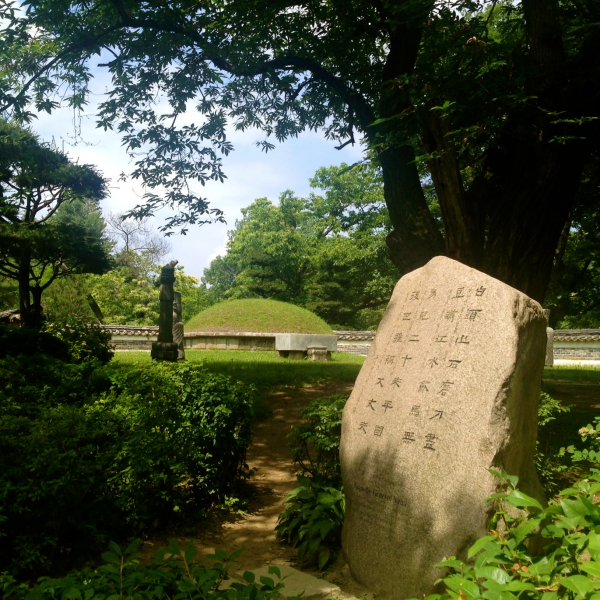 The tree-lined paths were my favorites, as cliché as it may be, seeing as they're one of the iconic images from "Winter Sonata." But seriously, it really is nice just wandering around between all these tall trees.

As we walked, we realized we should've brought swimsuits or watersport-friendly clothes -- Nami has so many water-related activities! Besides just cruising around on a boat to cool off from the summer heat, they offer tubing, swan pedal boats, and whatever you want to call this:

Not sure what this is like, but I want to find out. By trying it.

Nami also offers a ton of bicycle options. Hourly bike rentals (single, tandem, and little four-seater family cars) are available so you can cruise around the island's paths, but it was the Sky Bike that piqued our interest. 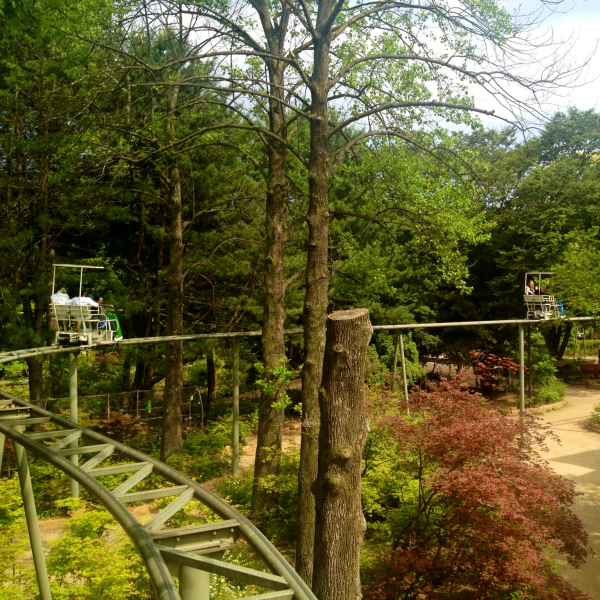 It was a pretty short ride, but it was still fun to pedal along and see some of the island from a (slightly) higher vantage point. We were tempted to rent bikes as well, but opted not to split into groups and just walked around instead. It was still fun, however, to watch all the other people cycle by. 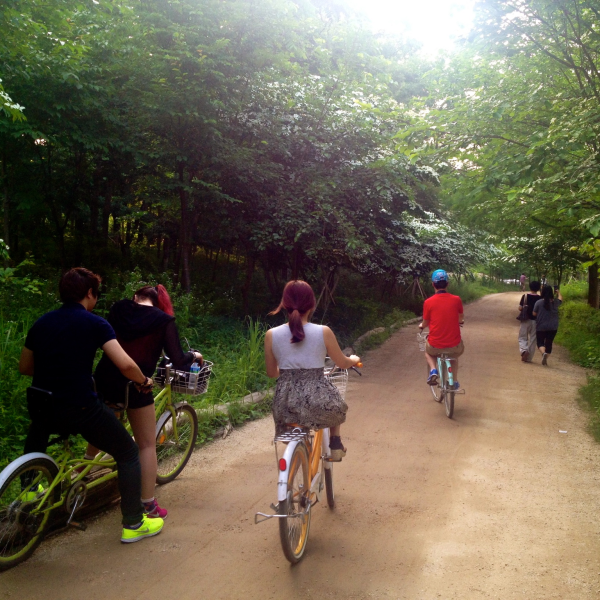 Recycling is really important on Nami, as evidenced by their numerous art pieces made out of old soju bottles. The island tries to be very environmentally conscious -- all of the trash bins around the island had separate slots to make recycling easier.

This bridge leads to another really famous spot from "Winter Sonata," where the two main characters have their first kiss: 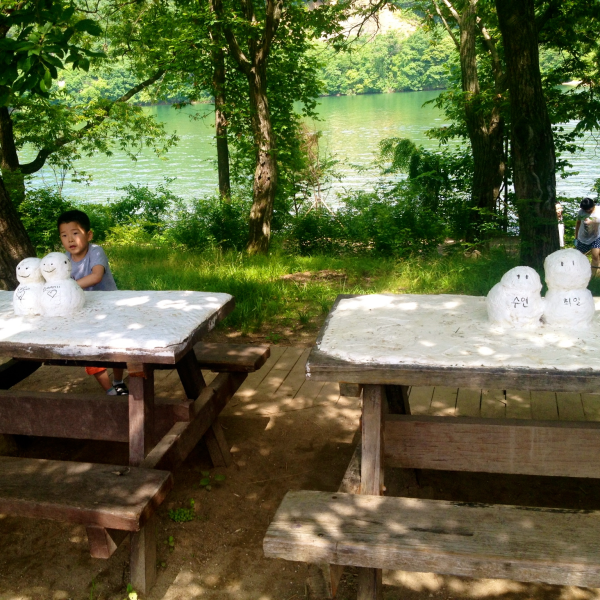 They even have permanent fake snow/snowmen so tourists can sit down and recreate the scene.

We spent hours just walking around the island. The shade from all the trees keeps the temperature cooler, and it was just so lovely to soak up the out-of-doors. The island has lots of food options, from sit-down restaurants to food tents and stalls, selling everything you could want. After a long stretch of wandering, we found ourselves at a picnic table for a couple hours, having some drinks and grilled octopus, sharing stories from our different CDI branches, and enjoying being outside. 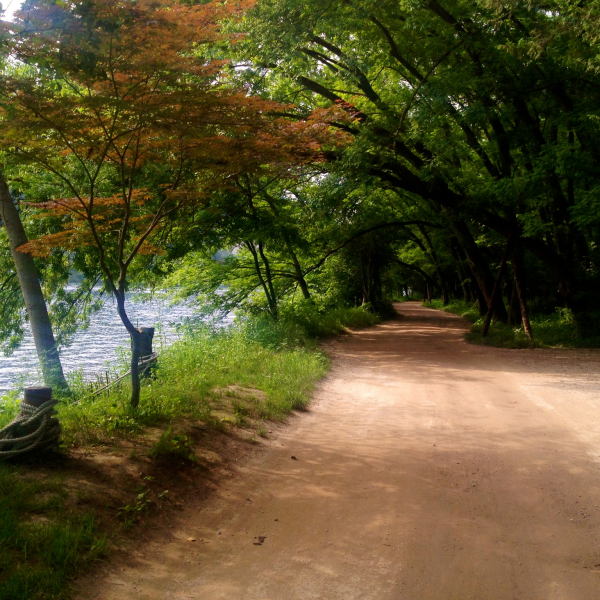 Before coming to Nami, I'd read that there were ostriches. Ostriches? Yes, you read that right -- ostriches. Just... walkin' around. Being ostriches. A few were actually in an enclosure, but most of the ones we came across were roaming free, looking kind of freaky, and getting a little too close...

This guy just walked up to our little picnic, while we all froze in terror. (And took pictures.)

After our interesting run-ins with the ostriches, it was starting to get late. We had return tickets on the ITX at 9:30pm, so we were nearing the time to catch a late ferry and grab dinner near Gapyeong Station. The island was significantly less crowded at this point, so we enjoyed one last stroll through the trees back to the ferry terminal. 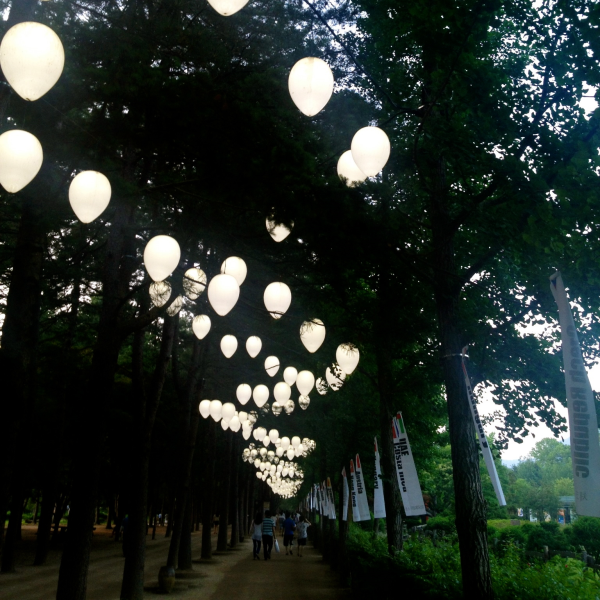 Nami does actually have overnight accomodations -- from little bungalows to larger condo-style pensions, it's definitely a possibility to spend the night on the island. Just off the island, near the ferry terminal, there are other options as well, which are definitely cheaper. By the end of the day, we were all exhausted and ready to go home, but I can definitely see the appeal of staying overnight. Especially because it would allow for easily changing clothes for participation in some of those water activities...

Nami Island was a really wonderful way to spend a Saturday in Korea, and I'm already plotting out a full-weekend stay on the island sometime in the next couple of months! If you're looking for a good weekend trip to take this summer, head to Nami Island. Enjoy the trees and the sun, avoid the ostriches, and eat lots of dak galbi for me!