While living and teaching in Korea these last three weeks, I've been invited to two Korean weddings. I was first invited as a plus one by a fellow English teacher, and my second invitation came from my Korean friend, but with the request to bring 1-2 other English speakers. This was so I wouldn't be completely without someone to talk to; the other wedding guests did not speak much English. My friend and I were met with open arms regardless of the language barrier however, because for Korean weddings, it's a sort of tradition that the more people who attend your wedding, the better luck you will have in your future.

I was feeling very lucky to be invited to the wedding. Perhaps it's because it's the last hurrah of Spring, but I seem to have caught the love bug. I see couples everywhere, and I can't stop listening to the latest K-Pop love songs (specifically Lee Sung Chul's My Love). Although I had to decline the first invitation to a wedding due to a previous engagement, I said absolutely yes to this next one! 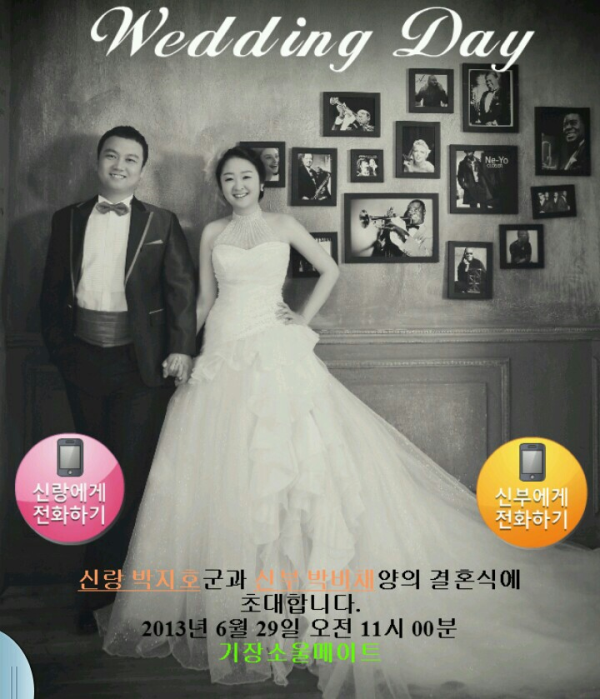 We drove to Gijang, which is on the outskirts of Busan. It was about a ten minute drive. When we arrived at the parking lot there were many parking lot workers ushering cars in and out of spaces. Our destination was called Soulmate, and it was a bustling wedding convention center type of business. There were many different weddings taking place on separate floors, and we squeezed into the elevator with a many women wearing gorgeous hanboks, but heading to different weddings. 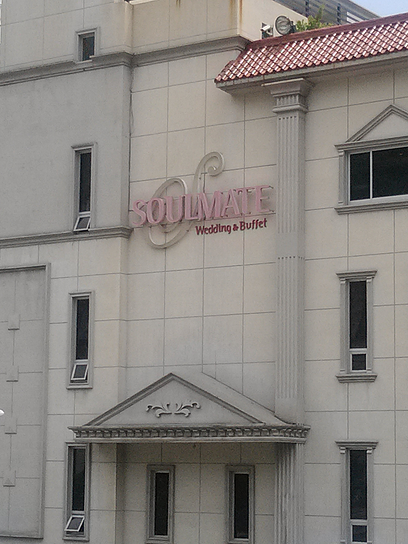 We found the right room just as the ceremony began, and it was packed with guests. There were no seats left, but we huddled in the doorway and gazed with wide eyes at the proceedings. An older man was giving the newlyweds marriage advice, and when he was finished the couple faced the audience. A tray of cakes was brought out, triumphant music played, and smoke billowed out from what would usually be referred to as an alter. Although the couple were buddhists, the ceremony was not religious. 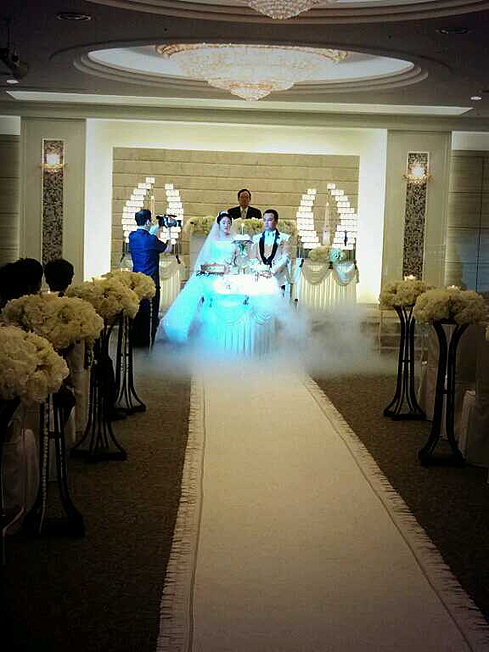 After the cake was cut (but none was eaten), another friend took the stage. He was a friend of the groom's from military training, and he was also an amateur comedian. As he took the stage and began to speak the room erupted in laughter. I even chuckled at points, because he was incredibly animated, and made the groom do pushups! His monologue ended with the groom taking off his shoe and receiving cash from the wedding guests. After that the comedian friend pocketed the cash, of course. It was hilarious, even though I couldn't understand a word.

Next, another friend took the stage, and sang a really beautiful love song to the couple. His voice was amazing, and his song elicited many tears from everyone in the room. The last part of the cermony was picture time! They took pictures with family, and friends, and then everyone hastened out to get to the buffet downstairs. Well, the family did. The family also went on to perform the paebaek tradition, a sort of tea ceremony limited to family members. After saying their congratulations, the friends all went on to eat somewhere else. 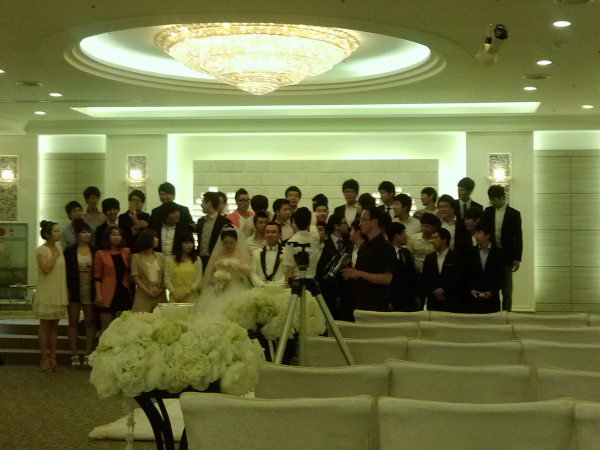 The whole ceremony was limited to an hour, and on our way out we admired the next couple's bridal photos, already hung up on the easels outside the entrance. The white flower petal spheres stayed the same, although the carpet was rolled up quickly.

My friend and I were invited to join everyone else as they left to eat and drink at a seafood restaurant nearby, while family and other visitors went downstairs. Although no one really spoke English, each person was extremely welcoming, and eager to try the few phrases they knew in English, as was I in Korean (nice to meet you, what is your name, how do you like korea, how old are you, etc). We all drove separately to a fish market about five minutes away, and gathered upstairs to eat, taking up a whole room. There was the usual plethora of food. Fish and korean side dishes and noodles. Plus the room we commandeered was host to three freezers full of soju and beer, the likes of which flowed freely. Everyone was extremely gracious, always asking us if the food was ok, amongst many warning of its spicyness. It was delicious. And we got full quickly but, after the newlyweds dropped in to say their last goodbyes before their honeymoon to Jeju, everyone headed to another restaurant, one whose specialty was chicken feet.

Norebang was next! But us westerners were exhausted and my friend had work to do, so we bowed out gracefully. On our way home I couldn't stop listening to those KPop love songs! They are so perfect for this wedding and the many weddings that happen in Busan. It was truly a magical affair and I was so happy to be invited.

After graduating from Emerson College with a BA in Writing, Literature, and Publishing, Ariel Rosen looked back on the semester she spent traveling around Europe and decided she must explore Asia. Her teaching job with ChungDahm April in Busan allows her to experience South Korea firsthand and with the bright enthusiasm of all the children she teaches. She is overjoyed to share a class with them and finds herself learning more from them and the warm beach city around her everyday.

Tags: celebrations in korea, love, what to do in korea, Activities to do in Korea, Spring, couples, Weddings in Korea