The event was run through Dalma Buddhism, a group that hosts "Window to Korean Culture" events at the Hongbeopsa Temple once a month. The events are exclusively for forigners, and include traditional Korean dyeing of fabrics, making Hwajeon (flower pancakes), green tea, lotus lanterns, samulnori (playing four different Korean traditional instruments) and many other traditional activities. All events are posted on their facebook page and most events are free. The temple stay was 20,000 won, which was a great price for two meals and an overnight stay in the temple.

We arrived at the temple in white shirts and traded our pants in for grey parachute monk pants, which were the most comfortable pants I have ever worn, hands down. We were also given name tags, room keys, and water bottles and were instructed to meet in front of the Dharma Hall for the opening ceremony heart sutra at 4 pm. This left a bit of time for exploring! 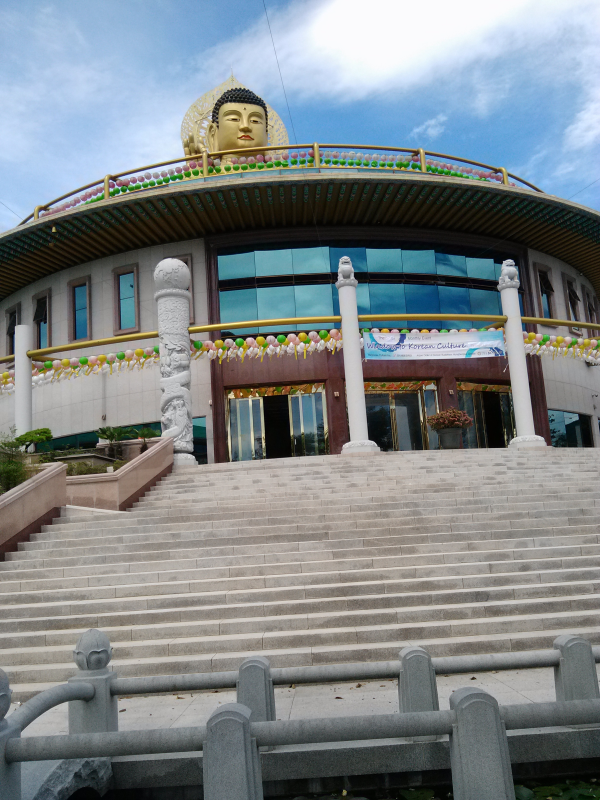 My first shot of the temple, this is the front of the Dharma hall. Hongbeopsa is a more modern temple, which is why it doesn't resemble the pagoda style traditional temples as much as others. In front of the temple is a small koi pond!

It was soon time for the Heart Sutra. We all gathered on cushions in the center of the hall and sat before the three buddha statues and lanterns. These buddhas are the Sakyamuni Buddha, the Avalokitesvara Bodhisattva (Gwanseum Bosal), and the Ksitigarbha Bodhisattva (Jijang Bosal). Usually the Heart Sutra is a chant, but the kindly westerner monk explained that chanting is pretty difficult at first, especially for foreigners, because it uses a different time signature than we are used to. So, we read the chant out loud from two large projector screens on the left and right of the buddhas. After this we had a break, and then it was dinnertime! 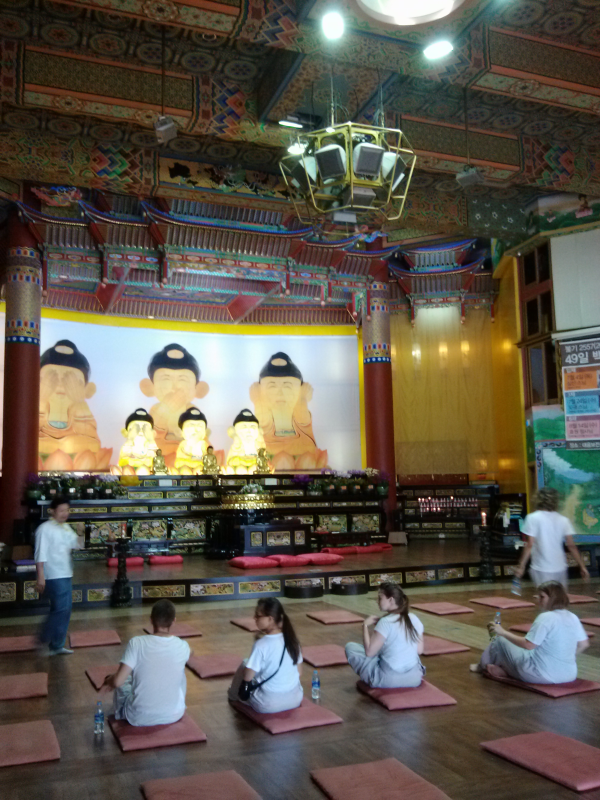 This picture was taken just before the Heart Sutra began. This temple is very different from others, it was built as a Buddhist center for everyday life, and it's main mission is education. This is why it has more modern installments like speakers and projector screens.

For dinner, we were about to enjoy a traditional monastery meal. We sat in a circle and were guided by the head monk about how to unwrap the dishes in front of us. After unwrapping them, six volunteers came around to serve us our meal of rice, side dishes, and soup. It was required to be silent throughout the meal, and at the end, we washed our bowls with the water we were given. We weren't through with that water though! According to Buddhist tradition, our gross murky leftover food cleaning water was the same as the food we had just eated, so we must drink the food water as well. There were to be no leftovers. I pushed down my nausea and drank all my food cleaning water in one go. Yes, it was disgusting, but it just goes to show that I had not yet reached enlightenment. 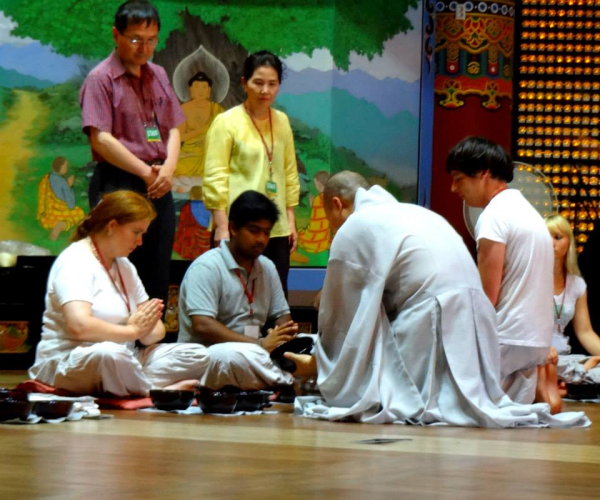 Meditation was before bedtime at 10 pm for a couple of hours and the guest female monk from Texas explained to us how to breathe from our core, a point two fingers below the belly button, and how to let stray thoughts pass by like ripples in a clear pool of water. Don't splash around more to get the ripples to stop, it will create more ripples! Just watch them, and let them go. It was a lot of sitting, but it felt very calm and relaxing, and I definitely was able to give my mind a spring cleaning. We woke up at 4 am the next morning for our 108 bows and a few more rounds of meditation. These were not half bows at the waist but full bows, standing up, sitting down and touching three points (forehead, two elbows) to the floor and standing back up again. The bow uses a lot of momentum, and you get into a deep rhythm. It was a graceful workout. But I didn't realize how strenuous it was until I'd made it to the end and tried to walk down stairs. After that we had a more regular breakfast in the cafeteria section, and then made buddhist bracelets! It was definitely an experience!

To get to Hongbeopsa Temple, take the orange line all the way to the end of line 1, Nopo, and hop on the green shuttle bus with "Busan Buddhism" on the side, it comes and waits every thrity minutes to pick up visitors from 8:45 AM to 5:45 PM outside the Nopodong Central Bus Terminal.