I hate singing. Well, not quite hate... At some point in my childhood, I became utterly convinced that I'm a terrible singer and have therefore dreaded any time when I am asked to sing. Karaoke at bars in the States? No way. I don't mind being ridiculous in front of friends, but I was very skeptical of the infamous Korean norebang. Little did I know it would become one of my favorite weekend activities as an English teacher in Korea. 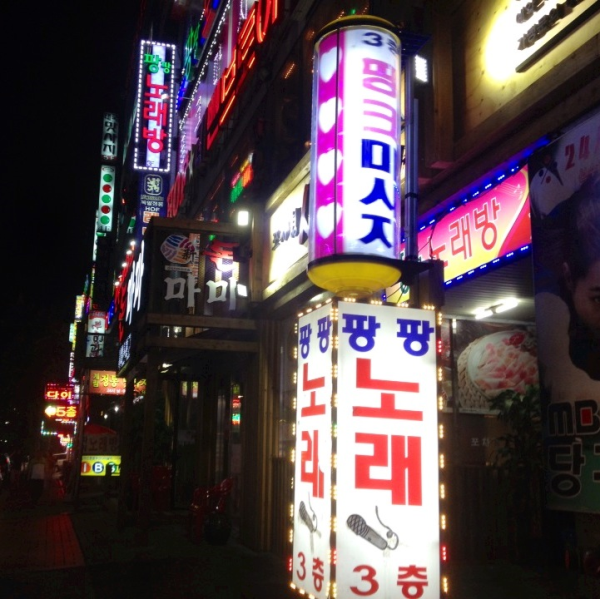 Back home, I equate karaoke to varying degrees of public humiliation. I remember feeling second-hand embarrassment for drunken singing strangers quite well. Norebang changes everything. In order to paint a vivid picture for you, let's cover the basics. So, what is norebang exactly, you ask. Norebang, or 노래방, translates to "song room" and it is just that -- so think karaoke, but instead of at a bar in front of tons of strangers, you're in a private room with your friends/coworkers. Also, tambourines are usually involved. Sometimes even maracas. The idea of a private karaoke room seems to slowly be catching on outside of Asia, but they're still few and far between.

It's easy and simple to find a norebang. Just walk outside. And then scan around for a sign that looks something like this: 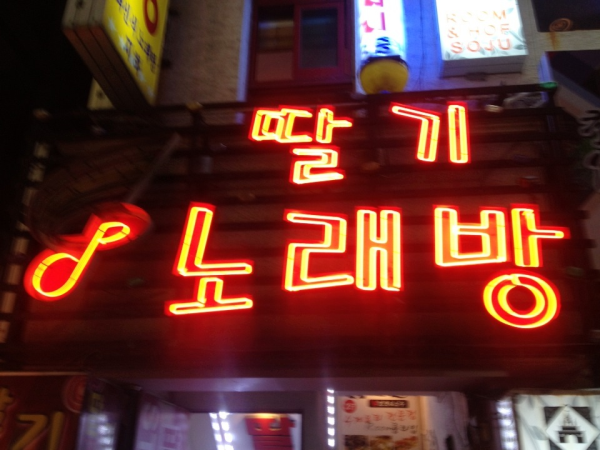 They're literally everywhere. They're like coffee shops -- on every block, in nearly every building. You rent rooms by the hour, and the cost usually averages around ₩20,000-30,000 per hour. The price is definitely proportional to how nice the particular norebang is and also on the size of the room you need. The rooms range in size, from a small one perfect for four or five people, to huge ones that can accomodate over twenty.

This fancy schmancy room with a mirror wall and a loft is in Hongdae and was just ₩30,000 for an hour. You may have seen it -- it's the one with the huge windows that look onto the street.

After renting your room, you can order drinks and food. The drinks are typically beer and the food is usually just bar munchies, but it's still better than nothing. Another option is smuggling in whatever you want, which seems to be common practice. Then, settle in and flip through the impressively extensive songbooks. There are some odd gaps in the catalogue, but overall, they probably have just about any song you could want, and they seem to be updated regularly. There's a Korean section, a Japanese section, a huge English section, and occasionally some in other languages. There's a fancy remote that lets you search by name or you can just punch in the number assigned to the song you want to sing.

Typically, norebang seems to be a popular after-bar activity. They're open late and they're a good place to go as you sober up a bit (and wait for the subway to start running again). Or, it's the destination once you've had a fair bit to drink and you've lost all fear of singing in front of your friends. It's also entirely possible that you'll end up at one with your coworkers, possibly including the Korean staff and your Branch Manager after you've all had a company dinner. Imagine watching your normally quiet and polite Korean coworkers belt it out. And rap! And dance! Even my boss sang a few songs, and he was very insistent that everyone participate. That was an interesting experience... Nothing says team building like drinking beer and singing some golden oldies together. 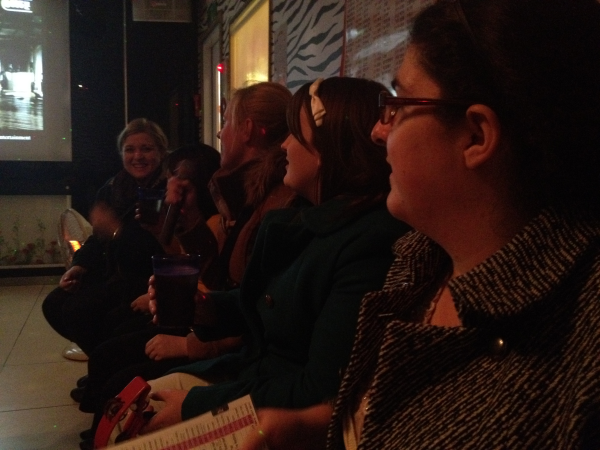 Before coming here, I fiercly resisted karaoke. I remember actually telling a friend once that if she tried to pull me up to the stage, she would literally have to drag my lifeless body as I had every intention of going into dead-weight mode. But now, I'm always one of the first to chime in when norebang is suggested. It's just a great way to hang out with friends, have some drinks, and be ridiculous -- all in the privacy of your own room.

"Bohemian Rhapsody" is serious business to us. 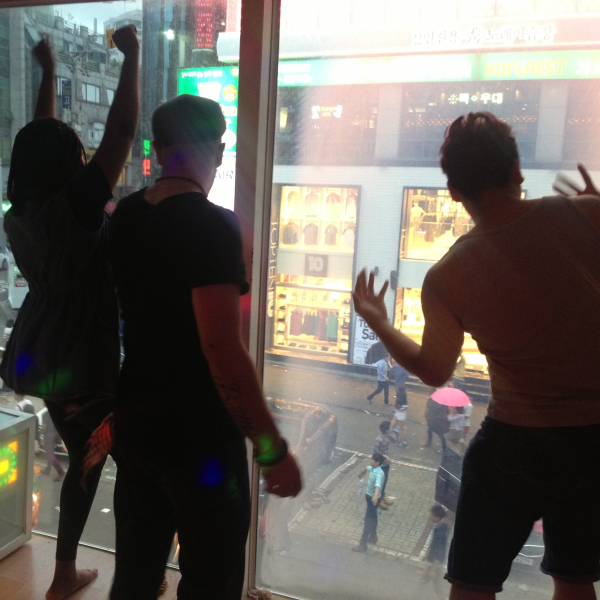 Dancing in our window for the people heading home from the Hongdae bars... at 6am...

It turns out that the girl who never sings is completely into acting the fool and belting out a medley of 90's pop with her friends on the weekends. It's definitely become a Korean hobby that I've embraced. I look forward to the times spent in various norebang rooms, either with my friends or on a company outing, because they're always guaranteed to be hilarious, a little awkward, and a lot of fun.

Have you ever been to a norebang or private karaoke room? Any great stories or song recommendations to share? Leave a comment below!