Summer is here! At Chungdahm, we are working hard by teaching additional summer intensive courses, but smack in the middle I get a week's vacation. As I was pondering how to spend this vacation I found a great trip through Facebook and a pretty popular travel group, Enjoy Korea. They provide both Day trips and Weekend trips for English speakers living in Korea. They're a licensed travel company who work with some of the main ski resorts in Korea and other businesses to provide some awesome trips at amazing prices. For my weekend getaway, I only spent 30,000 won, which is around $30.

Where did I go? I spent my summer Saturday and Sunday at the Uljin Global Beach Festival! This festival was a joint event with the Yacht Association of Uljin to celebrate the Korea Cup Sailing Competition that was held in the beginning of July. Although when most westerners think yacht, they think of a large expensive boat with a hot tub on the top, these were not what was racing. The yachts were actually wind surfers!

The windsurfers celebrating on the high seas.

We wanted to rent some "yachts" and try it ourselves, but they were only for professionals. We took a bus to Uljin through Enjoy Korea and as soon we arrived we decided to set up camp. One of the reasons this trip was so cheap was because we would be camping on the beach! No hostels or motels necessary. Enjoy Korea was bringing three buses full of westerners, mostly teachers from Daegu, so, before we arrived the beach was pretty deserted. The festival had a great set up, a solid stage, many food and drink booths, a game center booth, tons of tents on the beach, but it was a ghost town. So we brought the party! 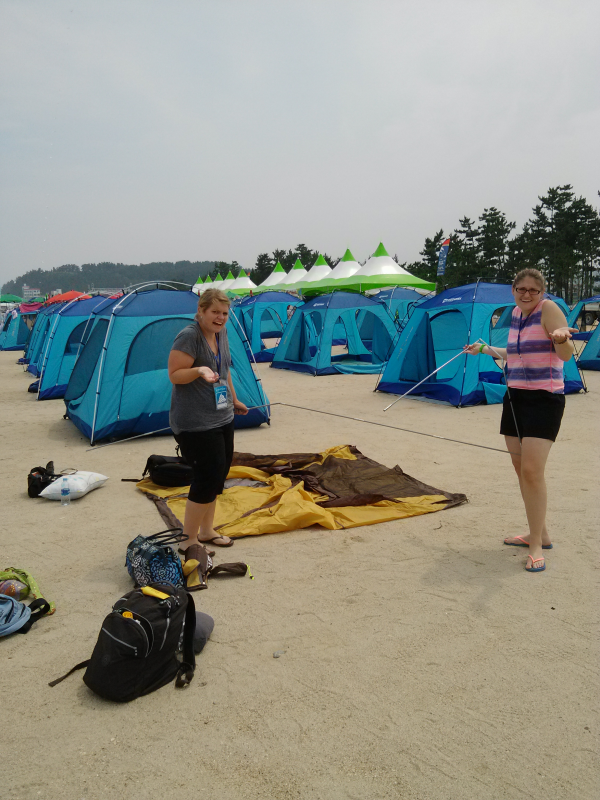 Pitching a tent! We brought our own yellow tent to the festival, but were unsure how to begin to make it perfect like all the other blue ones.

After pitching our tent we received our bar code bracelets. These bracelets could be used to buy food or drink from the booths on the beach, and we had around $45 on them because the buses that drove us to Uljin were actually free! They were provided by the Festival organizers rather than Enjoy Korea. We got some food, went swimming in the super clear water, and relaxed on the beach until nightfall, when the real festivities began. To start the party there were fireworks and a short show put on by a Korean military troop color guard. They spun their rifles in the air and even danced to Gangnam Style. It was a great show!

Beach view and a perfect spot for some relaxation time!

When the opening ceremonies had completed the DJ battles began. DJs played onstage until around 2 AM, and foreigners were singing on the beach even after the DJs had packed up. We fell asleep in our tent to the sound of ocean waves (and the occasional shout of a happy festival-goer).

In the morning we were served a free brunch thanks to the Yacht Association! It was buffet style and had everything from tonkatsu (fried pork cutlet) to mussels. It was delicious. Sunday afternoon was the designated time to rock. Many rock bands took the stage, including the punk band Whatever That Means, who only got to play a couple songs because one of the band members cursed and the sound board manager got offended and cut off their set. They were too hardcore! In my mind, they won the band battle.

Whatever That Means rocking out before they got kicked off the "Yatch" stage, oh Engrish..

After the band battle we headed back home, the bus ride was long but perfect for sleeping! Next stop for my vacation week? Relaxing more on the beaches here in Busan.

Tags: things to do on the weekend, summer in korea, free time in korea, music festival