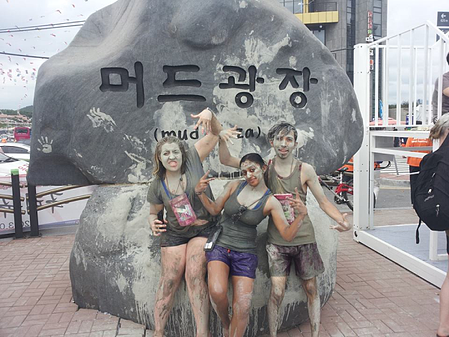 It began simply enough: my tour group piled into a crowded bus for a long journey to a relatively unknown place. We drank on the way. There were about 100 of us headed to the beach at 7am on Saturday morning. A handful of us hadn’t found sleep in over 24 hours. I was running on about 3 hours of rest. And for whatever reasons, we were excited about these facts. It emboldened us in some dumb way. Going on an adventure with little sleep and possibly still a little intoxicated on a Saturday morning is what many expats experience when they come to South Korea. Some have said the teaching abroad can be like College: Part Deux. Though, it's important to note that this isn't the case for everyone. You get out what you put in.

After settling in at the resort, we wandered down to the beach to check out the mud. I was slightly disappointed by the size of the actual mud zone. It had 3 large inflatable slides, a inflatable maze, and large area for free-for-all wrestling. Everything, of course, was covered in a thin, liquid mud. We waited about 30 minutes to get into the zone. We waited 30 mins to go through the maze. We waited about an hour to go on one of the slides. We waited because we wanted to get dirty! But at one point I left the line, walked over to the mud pit, splashed some mud on me, and decided to leave the mud zone. It was fun! But I felt the crowd was a little suffocating.

The mud zone, which had a 5,000 won price tag, was just a smallish part of the mudfest experience. There was also a very large stage on the beach with a DJ and dancers. Giant water cannons sprayed huge amounts of water into the moshing crowd. The audience exchanged mud as they bumped and ground into each other. When a person got tired, they would squeeze out of the crowd and fling himself onto the sand for a rest. That’s the great thing about festivals on the beach. The events are surrounded by one huge relaxation zone. Lie down anywhere. You’ll be chilling on the beach. 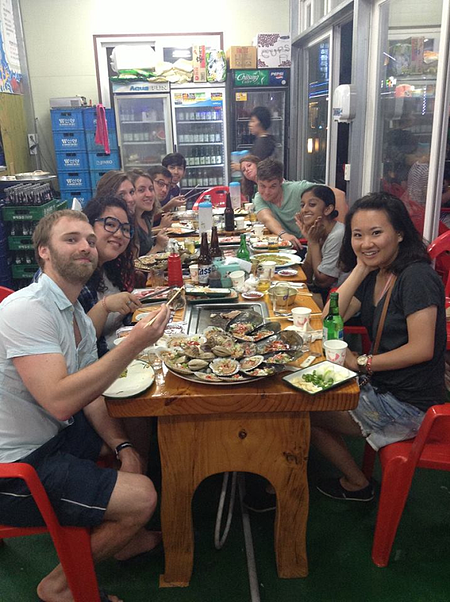 After we danced ourselves ragged and then cleaned up at our hotel room, a night out on the beach town began. I was intent on playing volleyball at night, so I bought a cheap ball from a convenient store. Then I caught up with some friends at a seafood restaurant. Now, I’m not a huge seafood fan, but this place was amazing. There were sea snails as large as both my fists put together, clams and scallops that seemed to have been bred for taste, and shrimp that were the closest thing to “scrumptious” I’ve ever tasted. The most amazing thing is that this wasn’t a special place. There were dozens of places just like it lining the entire beach. So we stuffed our faces, and then … and then... Well, I’d tell ya, but I can’t quite remember. What happened to my volleyball? I have no idea. Apparently I did see some beautiful fireworks, but all I remember is waking up in my hotel room the next morning thinking that I should down fifty billion advil and get the heck out of dodge. Soju. Stay away from soju! And avoid sitting near those reckless individuals who order bottle after bottle (me.)

But all in all and with a lot of hindsight, it was a great weekend adventure. And so has been my experience in South Korea. One day I left for an unknown place. It started with little sleep (a month of minor jet lag) and some intoxication (a lot of intoxication.) The mudzone was small, just as is Korea when compared to the US. I felt a little claustrophobic in the mudzone, and I’ve felt a little of the same in South Korea. (Never ride the 1 subway line from Seoul Station to Yongsan on a late Saturday morning. Sardines are put to shame.) But everything that happened was set against a beautiful backdrop and was ultimately pretty chill and relaxing. And the same goes for Mudfest. Most Importantly no matter what part of the country youre in, remember this: soju sucks. Really, the weekend was about the beach, friends, and good times. This year teaching in South Korea hasn’t been much different.