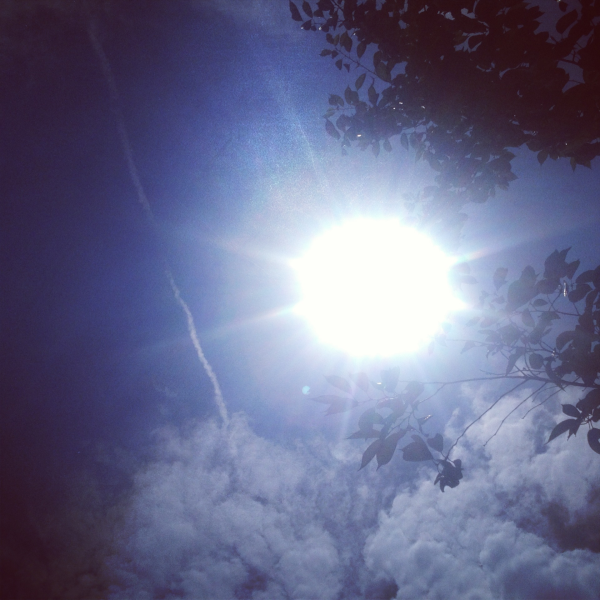 Eat and drink ALL the cold things.

This is absolutely the time for everything cold, and luckily, Korea knows what's up. As you may know, Korea has a certain affinity for coffee shops and dessert cafes. Not only do these cafes have a wide assortment of iced to ice-blended coffees and fruity drinks, but there's also bingsu, aka the best summer treat ever. 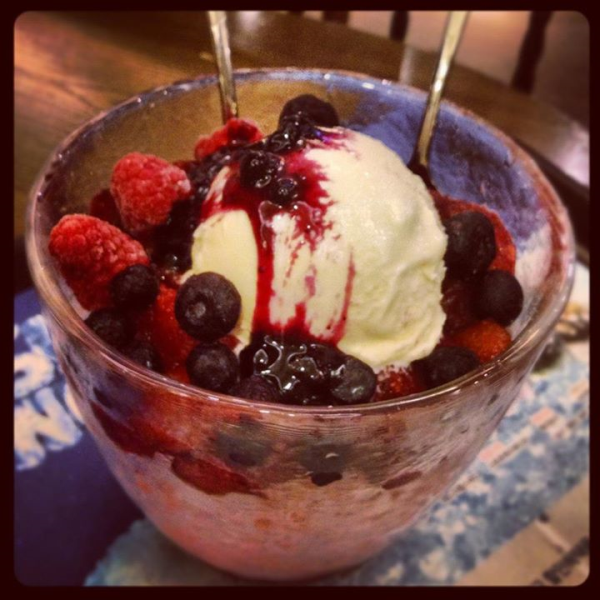 The one is from my favorite of the coffee chains: Angel-in-us.

Bingsu is like an overachieving snow cone. Instead of just shaved ice and syrup/cream, you get any combination of red bean, ice cream, rice cakes, fruit, whipped cream, cereal... I've seen tons of combinations in the various cafes around Korea. They come in huge bowls, so it's definitely easy to share this with a friend or two. They typically cost around ₩9,000.

If you're looking for a cold meal to take the edge off the heat, try some naengmyeon, or cold noodles. This dish will typically be a pile of buckwheat noodles, half an egg, some veggies, and broth -- with crushed ice. Yes, ice. This makes your noodles chilled and perfect for slurping back on a hot day. I'll admit, I was highly wary of these when I first saw a friend eating it, but after trying it myself, I'm willing to admit that I was wrong to be so skeptical. 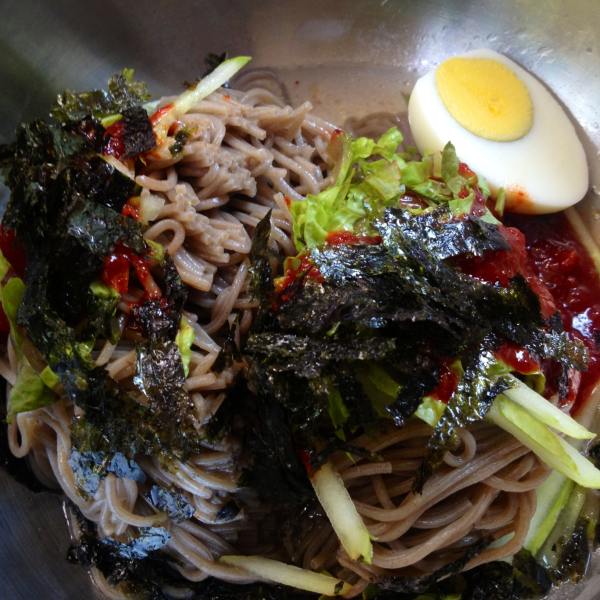 There are tons of varieties of naengmyeon, so if you've tried one kind and decided you don't like it, don't give up completely -- it took me a couple tries to make up my mind. Pro-tip: make sure your noodles are cut up with scissors before you try to eat it, otherwise you'll be slurping impossibly long noodles and it might make your experience less than pleasant. You can find naengmyeon in most Korean restaurants, and it's typically super cheap.

Also, a summer can't go by without these being a huge part of your life: 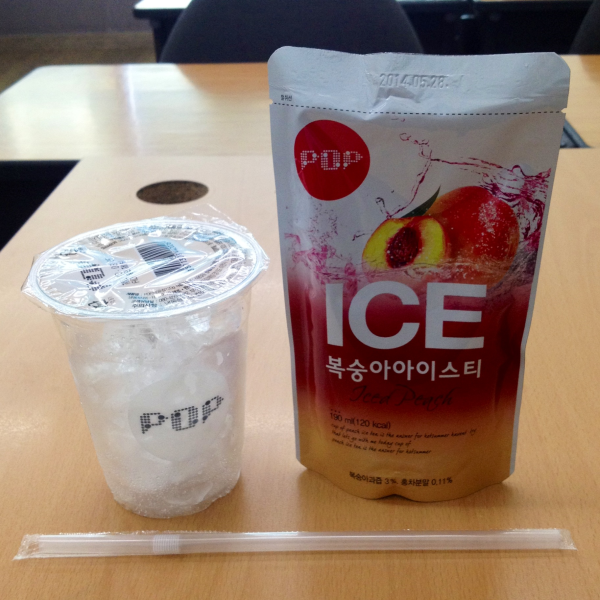 Ice Cup! How I love you.

You'll find these in every mart -- a pouch of liquid for ₩500, and a sealed cup of ice for another ₩500. They come in a wide variety of flavors, including bubble teas that are a tad pricier, and they're wonderful. Cheap, quick, and refreshing. And did I mention cheap? I've come to look forward to the Ice Cups making their way onto the shelves each summer. It just isn't summer in Korea without them.

One of the great dilemmas of the summer is the desire to stay indoors vs. the need to go do things. If you're worried about not taking full advantage of your weekends in Korea because the heat is making you slowly melt, look into spending your time doing indoors activities. 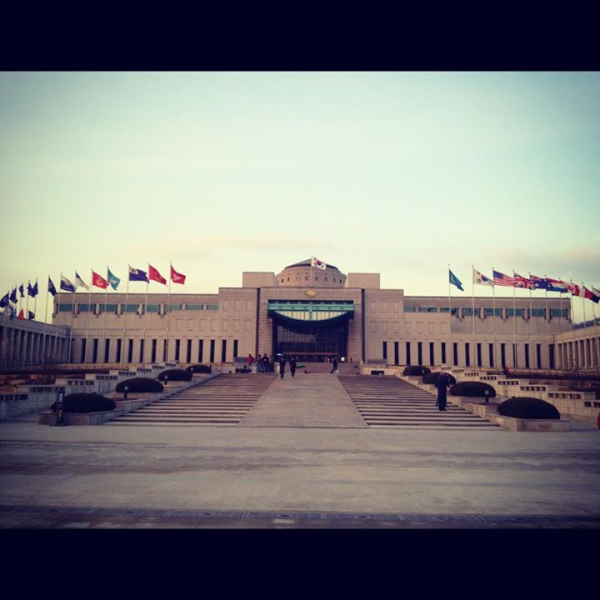 My go-to is always museums. Korea is full of awesome museums, such as the War Memorial of Korea, pictured above, with its free admission. It really is a well-designed museum, and while somewhat depressing, it's also very informative and interesting. There's also the National Museum of Korea, which is huge and also free! I haven't been yet, but I hear it's great and would take at least a full day to completely explore.

Right now, there are three really cool art exhibits going on in Seoul: Miyazaki and Studio Ghibli, Alphonse Mucha, and Paul Gaugin. (Click each name for more information about the exhibits.) 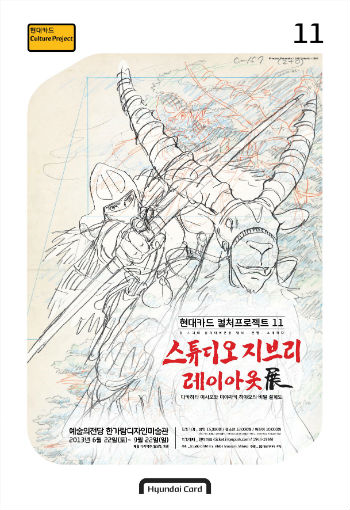 Admission ranges from ₩12,000-15,000. Also, just a heads up: the Ghibli and Mucha exhibits are in the same place, which is super convenient. All three art exhibits run into September.

Then there's another great fallback: themed cafes. They're everywhere in this country, ranging from dogs and cats to Hello Kitty and Mustoy Dolls. Some allow you to dress up in fancy costumes and pose for photos, whereas others have pools of water filled with fish that eat the dead skin off of your feet. 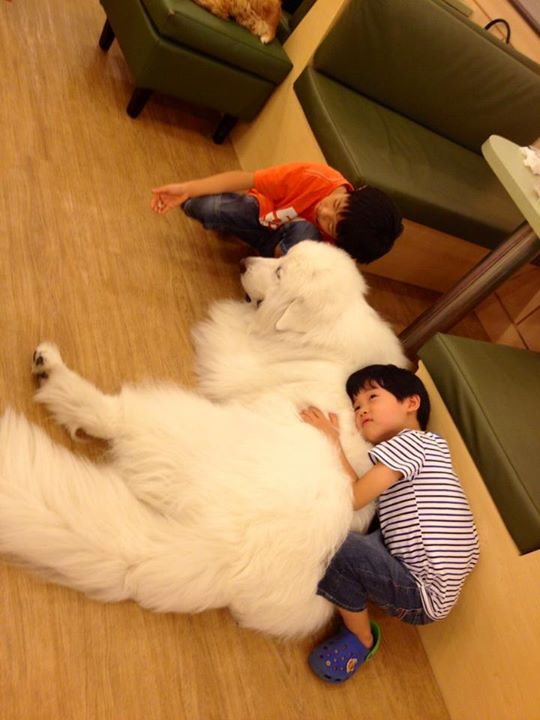 My favorite: the dog cafe. Just look how happy these children are! Best. Place. Ever.

Sometimes, I've planned an entire day around being in a particular area of Seoul so I can check out a new cafe. They're immensely entertaining, and with all the different themes, you'll definitely find at least one that interests you. For most of these cafes, the "admission" cost is that of a coffee or other drink from their menu, which is usually no more than ₩10,000. For others like the Mustoy Dolls or the dress-up cafes, you can expect to pay more due to the activity you'll be experiencing, in which case a drink is included in the price.

Embrace the use of fans and umbrellas.

You're probably going to feel silly waving around a brightly colored plastic fan in the middle of the subway. Especially because it seems like 99% of the fans here are covered in cute animals or something K-Pop related. Or, you feel ridiculous walking with an umbrella when the skies are clear and blue, because you're used to the idea that umbrellas are for rain, not sun. (The giant beach ones being the notable exception, of course.) But here's my advice: just swallow your embarrassment and follow the lead of the Koreans. 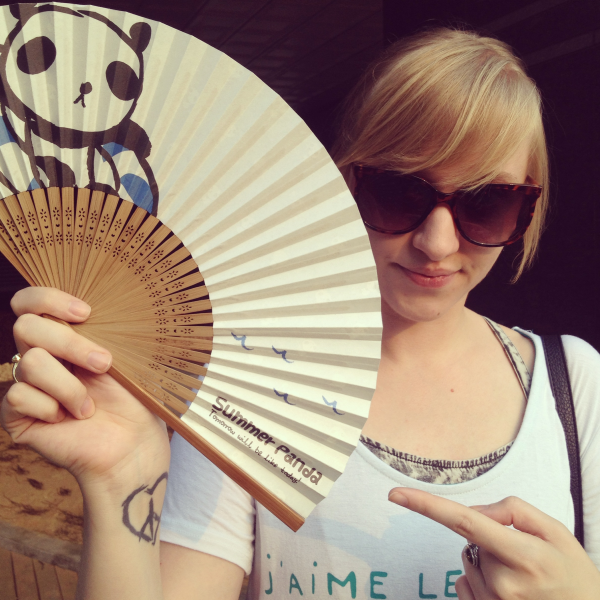 "Summer panda: Tommorow will be like today!" Gee, thanks, summer panda. Making me feel real good about this summer heat...

Air circulation is key. Summertime in Korea is kind of like living in a sauna, so even if you initially resist buying a fan, you'll eventually understand its usefulness and cave. Fans can be picked up literally anywhere -- from free ones being given out on the street (printed with an advertisement of some sort), to cheap plastic ones being sold near the registers in stores, or nice, fancy ones sold in touristy areas. So don't worry, if you need a fan, you'll find one easily. And I highly recommend finding one.

When it comes to the use of umbrellas, that all depends on how sensitive you are to the sun. In Korea, having tan skin isn't considered attractive, so it's common to see Koreans walking under umbrellas when the sun is out. However, even if you don't have an aversion to tanning, you have to appreciate having a portable shade-creator. It really does cut a few degrees off of the temperature by walking in the shade of an umbrella.

Last, and most obvious: get into water.

Korea has beaches aplenty, as well as countless islands -- one of the perks of being a peninsula. But for quite a lot of us teachers, we aren't always in a position to pop over to the beach for a day. Even living on the coast in Incheon, the best beaches are at least a couple hours away from where I live, which makes for a long commute to and from the water. 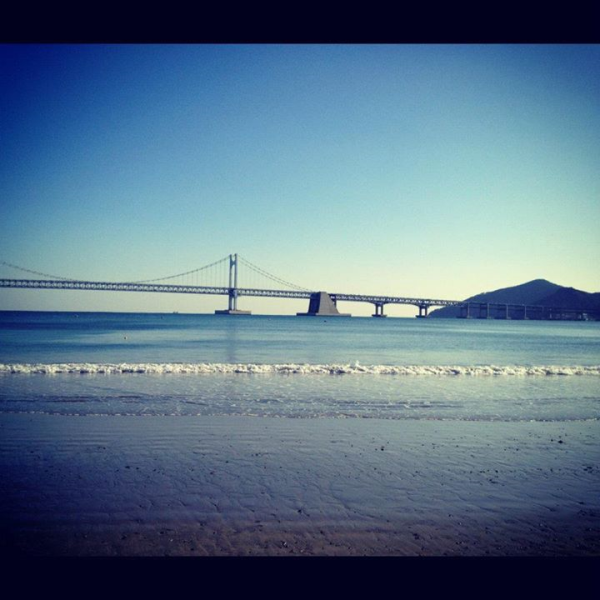 Luckily, while beaches are often ideal, they aren't the only spots where you can cool off. For more swimming spots, check out the pools along the Han River in Seoul. Is a pool too ordinary for your taste? Check out the water sports Korea has to offer, in nearly any place that has a river. I saw some interesting ones near Nami Island, and I've seen tons along the Han River. Tubing, peddle boats, something that looks like water Iron Man... Lots of activities that will cool you down. 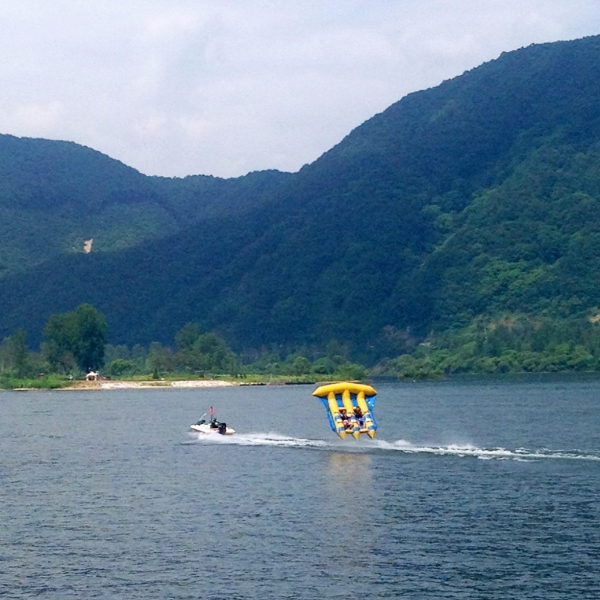 I bet these people are feeling nice and cool.

Recently, some of my friends and I have been throwing the idea of a water park around, eyeing either Caribbean Bay or Ocean World. Tickets to the two parks are on the pricier end of things, around ₩60,000-70,000, but for a day splashing around and acting like a kid? I'd say it's probably worth it to go at least once. I know it's definitely on my to-do list.

This is just a smattering of options for staying cool without sacrificing your enjoyment of summertime in Korea. I've already knocked a few of these off my list, and as we're facing quite a few more hot weekends, I'm trying to plot what I want to do next.

Have you tried any of these activities? Do you have any brilliant ideas for staying cool this summer that don't involve refusing to leave your apartment? Leave a comment below!