Sure. If you leave the United States, or Canada, or the UK, or South Africa, or wherever else you may be from, you're going to lose a year of your family, and friends, and favorite foods, and favorite what have you. But if you don't leave, you'll lose so much more. The worst thing about not leaving your home for even a brief blip is that you won't even know what you're missing. That's a fact of life. A fact I was reminded of when I made a last minute decision to join some friends at the Seoul Arts Center this past weekend. Originally, I had decided I would vegetate at home and save some money, but I changed my mind for various reasons. I am glad I did. Seoul Arts Center is a massive, impressive, and completely enjoyable complex of fine architecture and art. I almost missed it. I'm glad I left home this weekend. 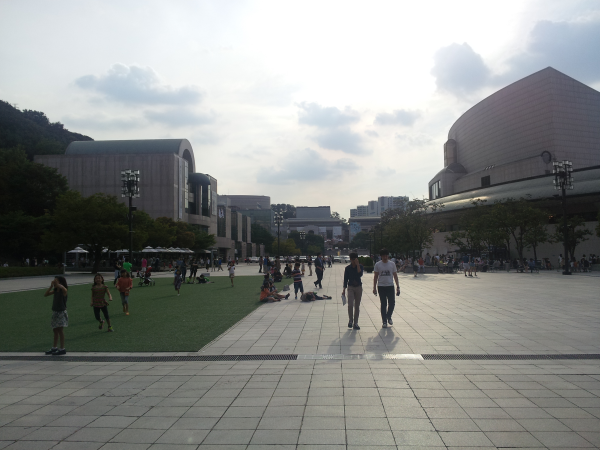 Located right outside Nambu Bus Terminal, Seoul Arts Center houses the city's primary and quite beautiful opera house, exhibition halls and a handful of museums. The picture above shows just a third of the site. I was quite surprised when I arrived to find such a large collection of buildings nestled into a large hillside. After exploring for a bit I grew disappointed that I had come late in the day. I could have easily spent a full day exploring the various museums, exhibits, and performances happening. I was reminded of the Getty Museum in Los Angeles. The Getty is newer, and it is technically just one museum. But it is massive and beautiful. SAC is just one rung below the world renown Getty in my eyes. 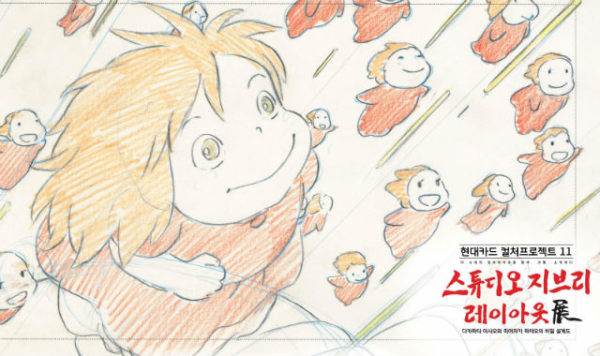 Hayao Miyazaki and his movie studio Ghibli brought me to SAC on this fine autumn Saturday. The first presentation outside of Japan of his amazing animated movies' inner workings piqued my interest. I am a fan of Spirited Away and My Neighbor Totoro. The animations are beautiful and nostalgic. The exhibit ends on the 14th of September, so I had to hurry down after a few friends said the exhibit was worth seeing. 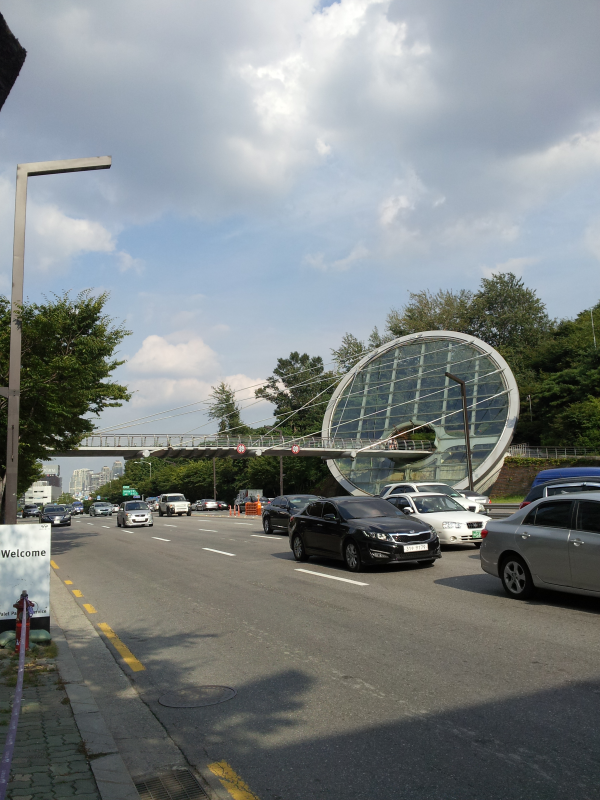 Luckily, there is a bus straight from my city to the bus terminal near the SAC. I arrived early, so I was going to check out the museum when I got distracted by the area's cool architecture. A random, cool pedestrian bridge popped out of nowhere and led into the hills. Mysterious, Korea. 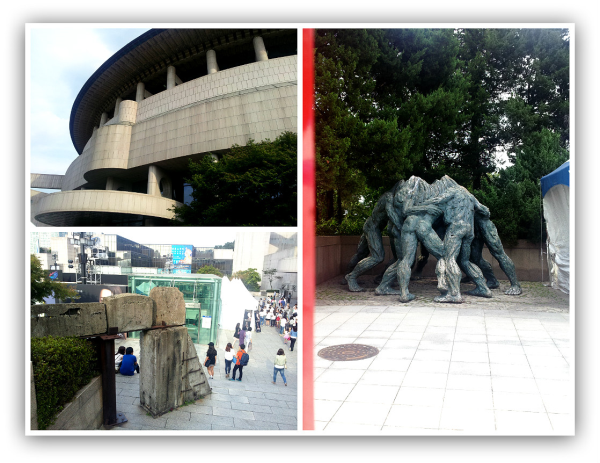 Seoul Arts Center includes about ten large buildings. The pathways and courtyards between them are littered with planters, sculptures, and other strange artsy things. Families picnic on the grassy lots. Tourists take photos of the architecture. I took in all this and the tranquility of the place. It reminded me of my university on a nice spring day. I always enjoyed the courtyards when they were like this: quiet despite the bustling activity, carefully laid out pathways for the traffic and open crannies for the rose-smellers. 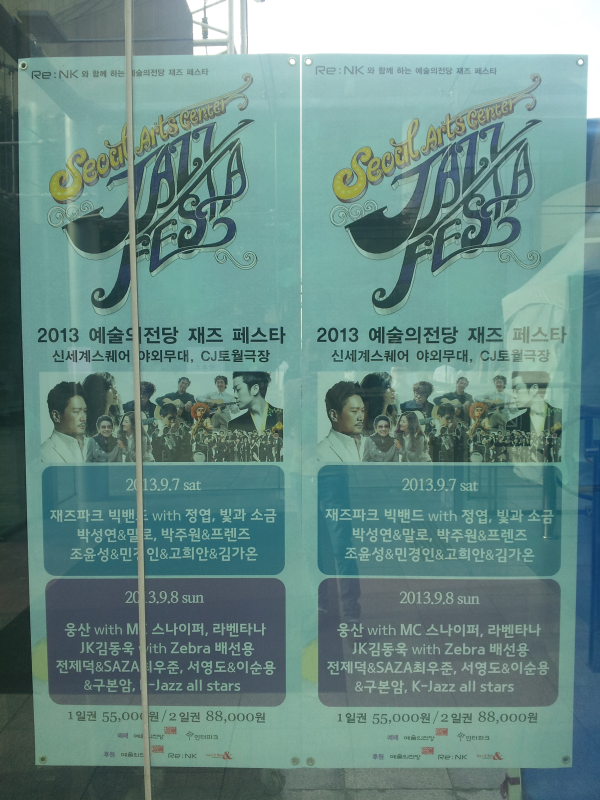 Bustling activity indeed. On this particular weekend, SAC had a number of attractions ongoing. Jazz Festa is one that I wish I had planned ahead for. The center enclosed one of the courtyards and erected a large stage for the musicians. As we were leaving, we heard the festival. Reynaldo, one of my good friends from Incheon, commented that Korea has an interesting flavor of jazz. We were hearing what sounded more like salsa music than jazz. Oddly, an acoustic guitar and bongo drums were only being used. I sincerely hope this "jazz" "festa" incorporated some horns at some point. 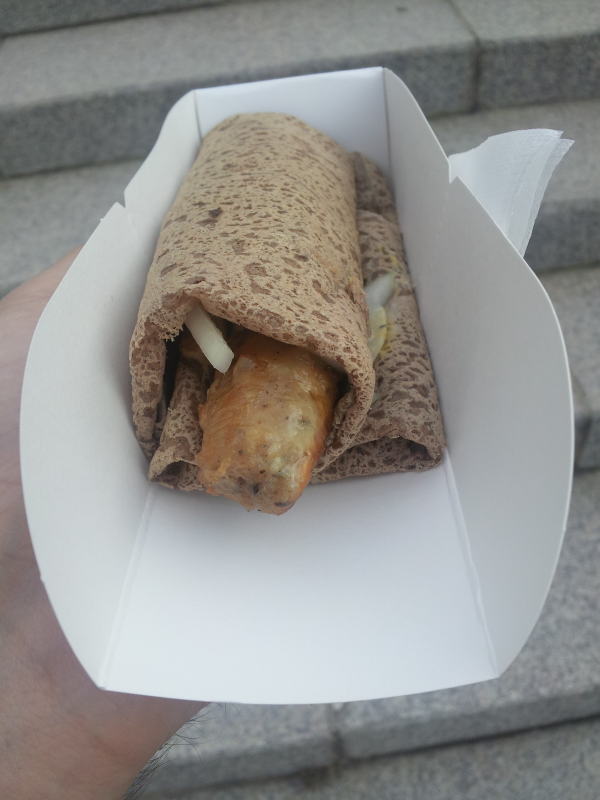 Right next to Jazz Festa were a few booths serving some different European foods. One booth had regular deli sandwiches, which were tempting, but I figured trying either the French or German booth would be a wiser choice. The authentic German sausages being served by the German himself were small looking but only $2.50. I didn't grab one, but my friend from Ireland had one. She gasped upon her first bite. She said that it was the first real sausage she'd had since visiting Ireland six months prior. I opted for a more filling morsel. The French booth served sausage buck-wheat crepes! I'd never heard of such a thing. For a slightly pricey $5, I bought the wrapped sausage, which was accompanied by onions, mayo, and a yellow, mustard-like sauce I'm ignorant of. The combo was unlike any crepe I'd had before. The sausage was sightly crispy on the outside and warm all over. The buck-wheat crepe was subtle and soft. The kick came from the mayo and mustard. Together with the onions, the dish was definitely worth the money. I wrenched myself away from the booth so I wouldn't buy another. 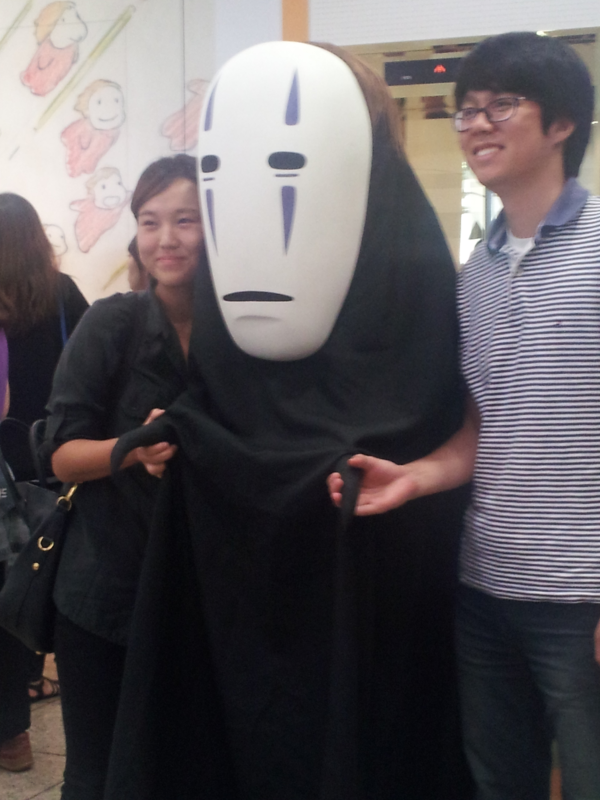 I ran from the tasty French food straight into No Name! The all-consuming character from Miyazaki's Spirited Away stood for pictures outside the exhibit entrance. He ate a few people in the movie, so I kept my distance.

The exhibit was deceptively large. I always make the mistake of scrutinizing every piece at the beginning of an exhibit only to have to run through the second half because my friends are waiting. That was OK at this exhibit, though. The winding procession along the maze of the showcase was lined with generally the same thing. Miyazaki drew a lot of the storyboards for his movies, and I feel as though ALL of them were in the exhibit. And that was it. He is an amazing artist. And the fact that he is so prolific, makes him an artistic genius. But there wasn't much variation to the showings. I enjoyed it all in all. Makes me wish I could draw half as well. 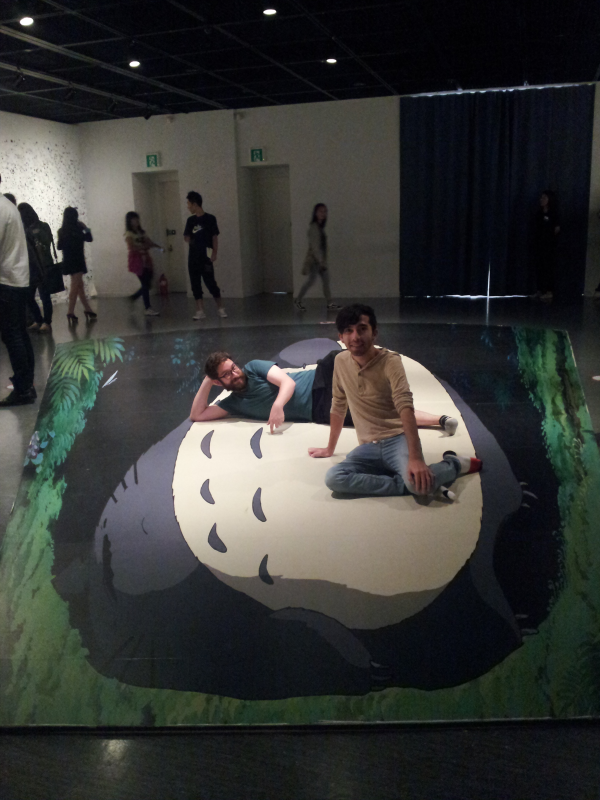 Reynaldo and I mostly split time evenly between commenting on the art and catching up. At the end we did get to sit on Totoro. The walls of the final room were covered with stickers that had been blank before visitors drew Miyazaki characters on them. It was a cool ending to an interesting exhibit. 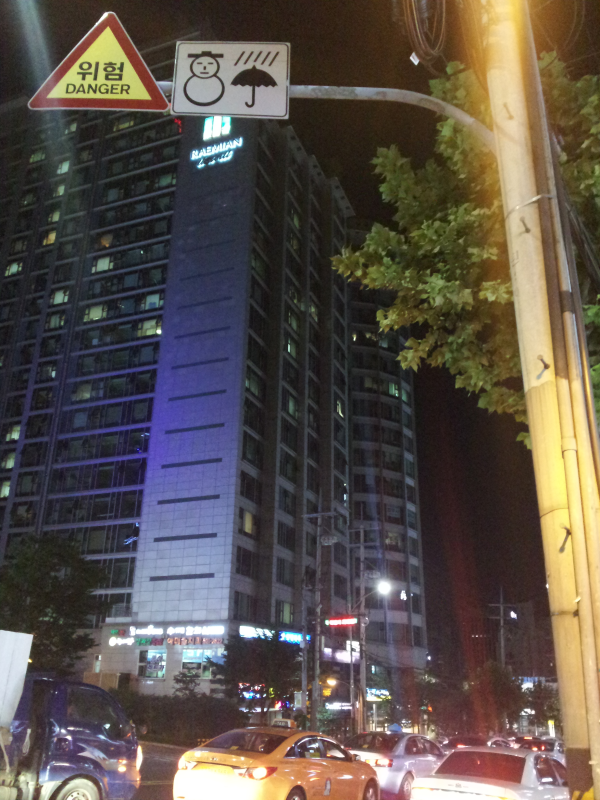 Seoul Arts Center is a recreational gem that I would have missed entirely had I decided to stay home. But I got my butt out into one of the worlds largest metropolises to experience a fine part of the city. I'm glad I did.

We also saw this perplexing sign outside the museum. We don't get much snow in southern California, so maybe it isn't a mystery to some snow-oriented folk. I think it is some kind of reminder that snowmen are too cool for umbrellas and rain. I could be wrong.