As a kid, I was fortunate to live in a city with impressive art museums, theater, and ballet. Coming to Korea, I remember hoping I would be able to continue to see great art exhibits and ballet performances. Luckily, living near Seoul has kept these diversions available to me, which has been, for lack of more descriptive word, awesome. This past Saturday, some friends and I decided to head to Seoul Arts Center to check out two art exhibits currently on display: Studio Ghibli and Alphonse Mucha. 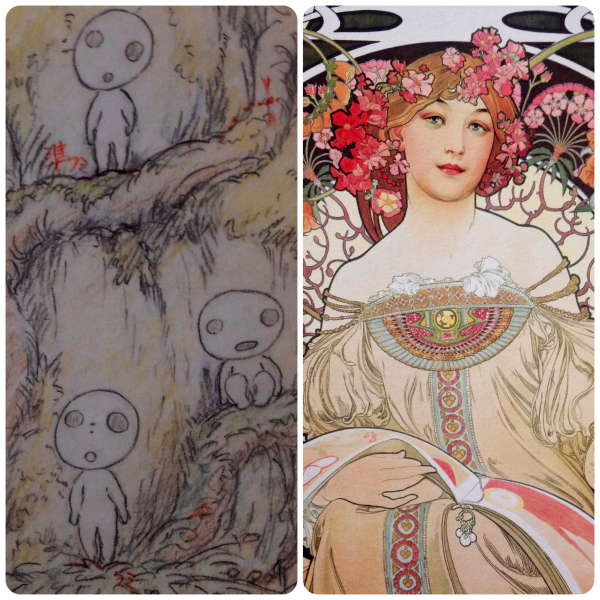 Both of these exhibits boasted impressive artwork, and being a fan of Studio Ghibli's films as well as being borderline obsessed with Mucha's Art Nouveau lithographs, I'd been deadset on seeing these exhibits for months. However, both exhibits end on September 22nd, and the next couple weekends are already full. Realizing this was the last opportunity to catch these exhibits, Saturday plans quickly changed to heading to Seoul Arts Center's Hangaram Art Museum so we could check them out. 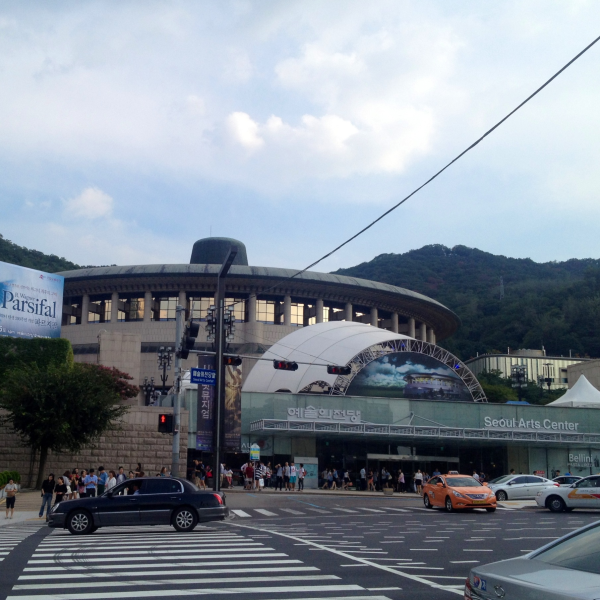 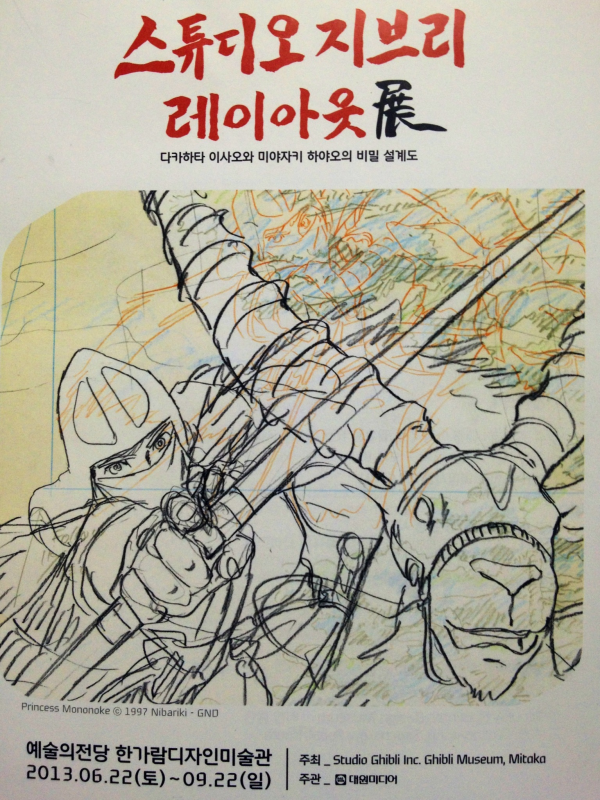 First, we wandered over to the Studio Ghibli exhibit. It's common for big exhibits like this to only let in a certain number of people at a time. So, after being handed our tickets, we were also given numbers. When we got to the entrance of the exhibit, we saw that we were about 200 back in line, but that they were letting people in 50 at a time. Luckily, we only had to wait about 30 minutes before being let inside.

The exhibit itself was massive -- illustrated layout after layout showing scenes from every Studio Ghibli production imaginable. In total, there are nearly 1,300 selections from the animation layouts of their films. Another bonus: this is the first time these pieces have been exhibited outside of Japan. 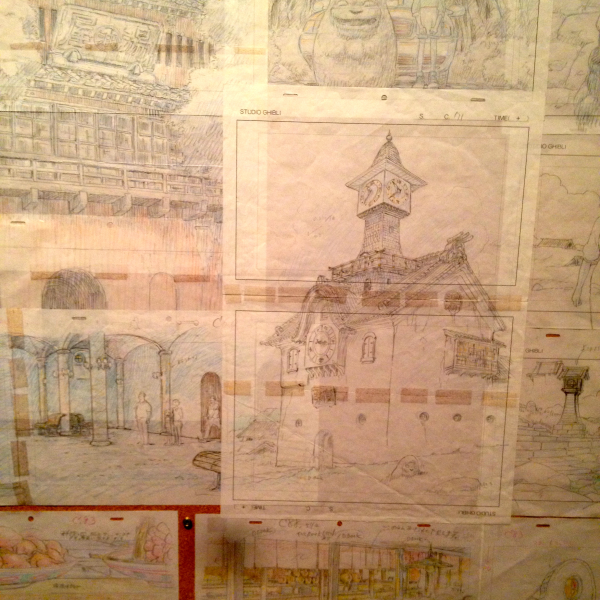 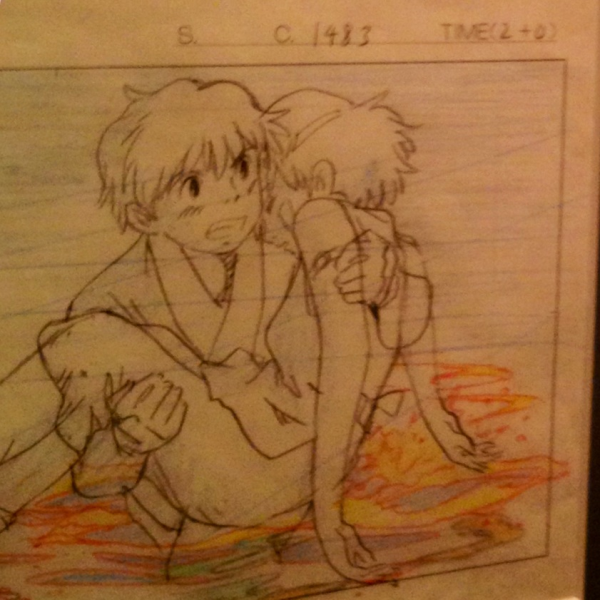 The skill and detail in the sketches was really remarkable. All so carefully laid out and planned, with amazing coloring and shading. It was really neat to see how Ghibli's richly colorful films started. Some of the layouts were even drawn by Ghibli's famous founders: Hayao Miyazaki and Isao Takahata.

Towards the end of the exhibit, I found myself picking up the pace. If there's one downside to this exhibit, it's that it has too much packed in. Normally, this isn't a bad thing, obviously, but the slow pace of the crowd's circulation through the galleries made me feel like trying to see every piece was actually impossible. 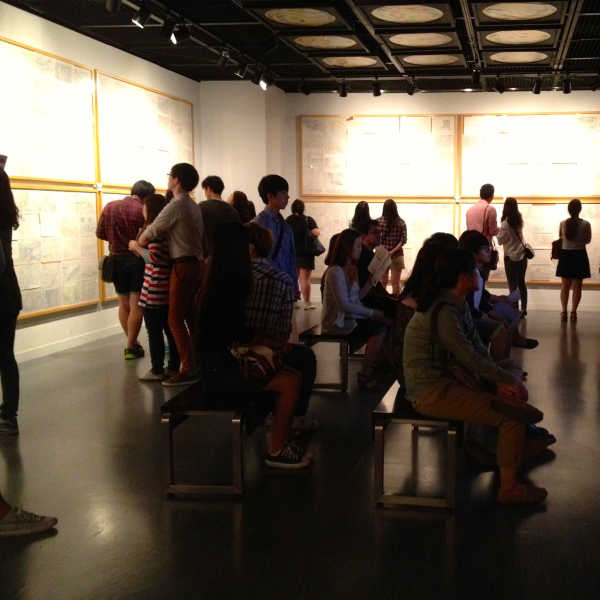 The final room is definitely worth checking out. Its originally empty walls have been plastered with round, white stickers, all of which have been drawn on by fans. Little versions of the famous Ghibli characters completely covered the walls and it was a lot of fun to walk around and just look at what people have drawn. I even added my own. 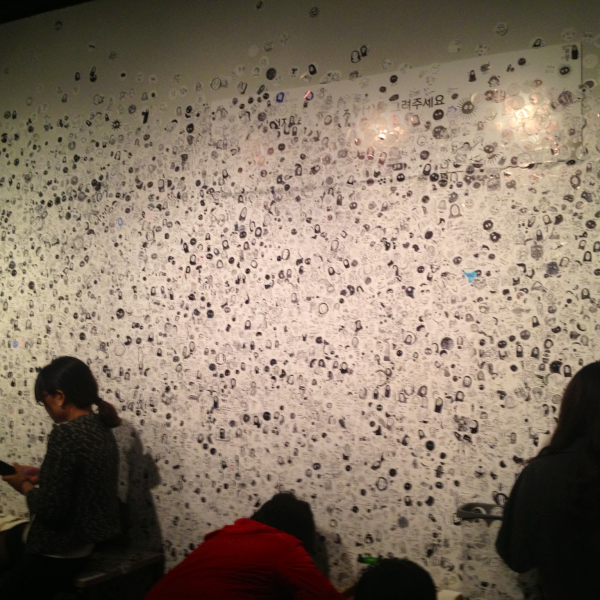 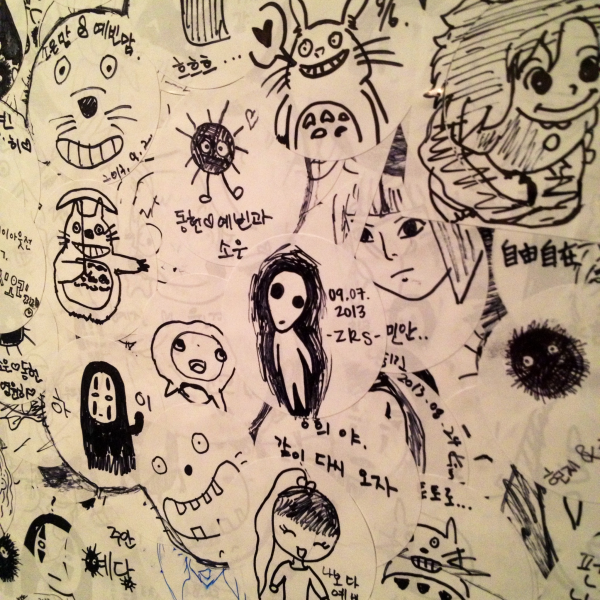 Upon exiting the Ghibli exhibit, I booked it to the other side of the Hangaram Museum of Art so I could make it to the Alphonse Mucha exhibit before it closed at 8pm. 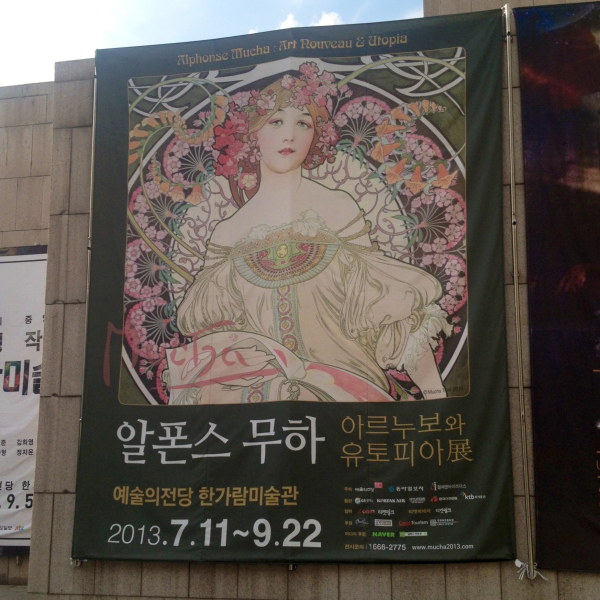 The Mucha exhibit, while much smaller, felt like it deserved much more than the hour that I had left. Upon entering the exhibit, I noticed a completely different mood. Gone was the frenzied pace of the huge crowd in the Ghibli exhibit... Instead, Mucha's exhibit felt peaceful, which is exactly what I like when I'm looking at art I've admired for years. The nearly empty gallery rooms left my friend and I to stroll through at our leisure.

The exhibit features some of his most famous lithographs as well as some sketches, oil paintings, and photographs. In all, the show has around 200 pieces, highlighting six different periods in his career. His works were displayed in beautifully ornate frames that complemented their Art Nouveau style. While walking through, I was talking about a mile a minute to the friend that was with me, just gushing about his art and the various things I loved in each piece. 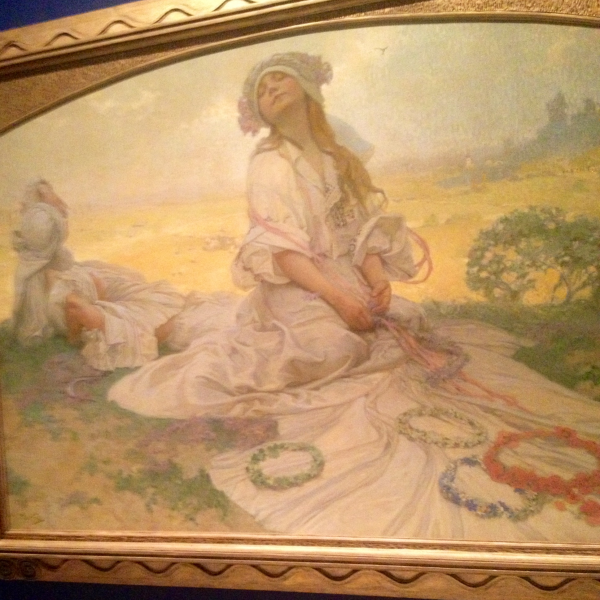 Seeing Mucha's work in person was awe-inspiring for me -- the colors and precision in his portraits as well as the wonderfully romantic style from the Art Nouveau movement in Belle Epoque Paris... It just wows me. The exhibit showcased the progression of his career and style really well, making it my favorite of the two.

Getting to see these exhibits was a really great opportunity, one that I might not have had if I didn't live in Korea. This fact alone made the ticket prices and the trek to the museum worth my money and time. While Studio Ghibli was packed full of people, it was fascinating to see the sketches for their popular and beloved films. The Mucha exhibit may have stolen my heart, but it's entirely thanks to the fact that his art is truly phenomenal. If you're looking for a weekend activity sometime before the 22nd of September, definitely make your way to Seoul Arts Center!

Bonus: For more on Seoul Arts Center, check out Serg's post, which covers the other parts of our Saturday art museum trip.