Teaching Abroad in Korea: Teaching Is Half the Fun!

The travel experience. The new culture. The interesting foods. The amazing people, both native and foreign. The adventure at large. I could go on and on about the many reasons that exist for teaching in South Korea. However, one aspect that is often overlooked is almost always the one that expats remember the most when their time in South Korea is over. The students, the children, the little rascals who provide incredibly unexpected and rewarding experiences on a frequent basis. My kids are at the center of some of my favorite memories from the 15 months I've lived here.

I think the best way to prove this to you is anecdotally. If I share my classroom stories with you, and if I share with you the enjoyment I’ve gotten from the many classes I’ve taught, you may combine this your tentative thoughts of leaving for Korea in order to make the final decision to come. Why do I want to persuade you to move here? I honestly feel that living and teaching here can be a valuable experience for anyone with the means. So, here are a few of my memories with my kids. 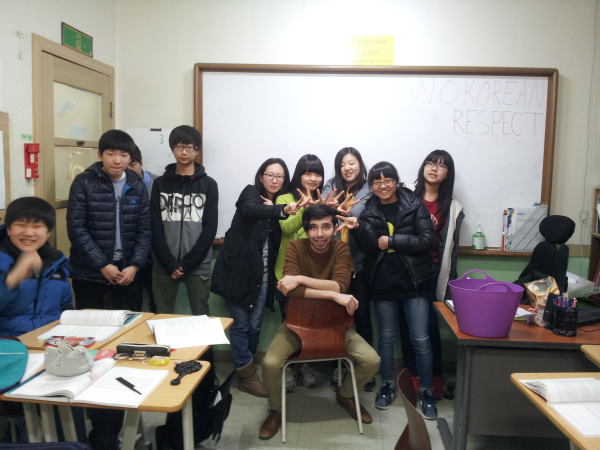 The picture above is of an Albatross class I had a few terms back. Albatross is one of the highest levels we have at Chungdahm. The students’ English is pretty conversational, so I learn a lot about them and they learn a lot about me by asking questions. One question I get is “Why are you so short?” (These kids don’t have much Western tact. Korean language and culture incorporates more direct questions without risk of being rude. Combine that fact with a child’s mentality and you have a perfect storm of awkward questions.) My height, 5’ 4”, doesn’t bother me, so I often joke about it with them. This Alba class, however, contained older kids, each one around 15. This class was respectful and generally tactful.

One day we were talking about smoking. They often ask if we, the teachers, smoke. I do not, but for education’s sake I pretended I did for a bit. As I paced up and down the class I shot out questions. “How many people smoke in Korea?”  A student fires back, “almost 70% of men, teacher! Like you!” I continue, “why do I smoke?” “You are stressed, teacher!” I emphatically reply, “Yes! It’s true. You drive me crazy. Now what are the negative effects of smoking??” One  very respectful boy, who often bowed to me upon entering and leaving the classroom, blurted out quite innocently, “it stunts your growth!” His face dropped when he realized what he’d implied about me. The class paused. The energy we had been building came to stand-still. Everyone looked at me. I had stopped in my tracks and was blankly looking at the boy. His mouth was open as he looked with horror into my eyes. Then, a second after he’d said it, the class erupted with uncontrollable laughter. Eyes watered. Students clutched stomachs. At least two of them fell out of their chairs. No kidding.

Perhaps to an outsider, the event isn’t quite as hilarious as it was in the class at the time. In this class, however, we had built such chemistry, we were so used to having a good time, these kids were particularly so amazing, laughing just came easily. So when this situationally ironic and genuinely funny moment occurred, the class lost it. This was the funniest moment of my teaching career.

It took us a good three minutes to get a hold of ourselves. When I was finally able to calm the class, I put my hand over my head to indicate my height. I said, “And that’s why you shouldn’t smoke.” They lost it all over again. 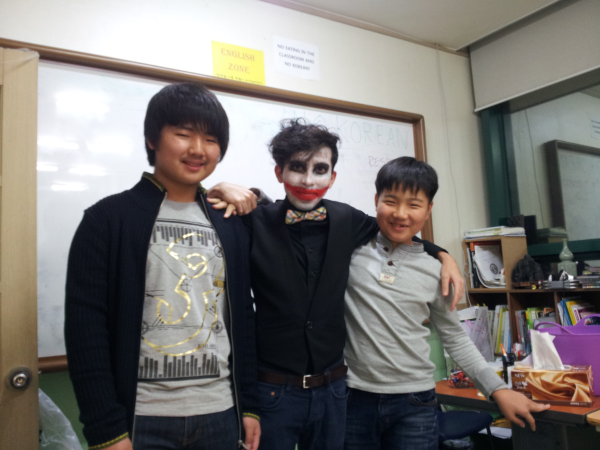 Meet James (Left) The Joker (Me) and Steve Jobs (Right.) These two are a couple of my favorite students. Neither is particularly amusing or excels academically, but they are both very genuine. We just get along well. (James always brings me gifts, too…) James is a great kid, though. He works hard. He always has a smile on his face. And when he sits next to a student who is struggling, he spends half his time helping the other student keep up with class.

One of the great joys of teaching is seeing the great character of students honesty shine through. For whatever reasons, adults hide their nature better. When we think of conformity, we think of teenagers. But perhaps it is adults who conform more strictly to being mature than teenagers do to fads. Before maturity hits, kids display their honest nature. A lot of the time, their character is awesome to see. I don’t have one memory of James helping his peers. I have a term full of them. He has gone off to high school now, so I don’t see him anymore. But I'll remember all the times he made me smile because either he was smiling, because he brought me candy, or because he would be hard at work helping the kid next to him.

Steve Jobs is a character. He is unabashedly in love with Apple. ‘Apple’ is every other word out of his mouth. He is also a struggling genius. He doesn’t do very well in class because he has a hard time focusing and his learning style doesn’t work well with school. He is actually very, very intelligent. One piece of homework is to memorize a few paragraphs of the day’s story. Most kids just repeat the story until they have it down word for word. Steve cannot do that. I’ve worked with him a lot on it. He just doesn’t work like that. Instead, he naturally does something that the other kids have a very hard time doing. He reads the story. He understands it. And then he paraphrases very quickly the most important parts. The other teachers and I spend months if not years teaching the kids how to find important details and them put them into their own words. Steve does that on his own because he is a genius like that. I love the kid for it. I wish his grades could reflect his abilities, but I don’t get down about it. Steve often says, “Teacher, I know I’m smart.” I say, “You really are, Steve. Now go find your brother, Bill.” That’s Bill as in Bill Gates. Steve and Bill don’t get along.

Avery is one of the strangest people I’ve ever met. Sure, he is a little boy. But the kid is weird, and I love him for it. One day, I come back to my room when the five minute break is about to be over. The picture above is the sight that greets me. Avery decided he was sleepy and wanted to take a nap. So he pushes two desks together, lies on them, covers himself, and falls asleep. He is snoring when I come into the room. And somewhere in the four minutes of break, he inexplicably loses a shoe.

After I call his name, Avery wakes. 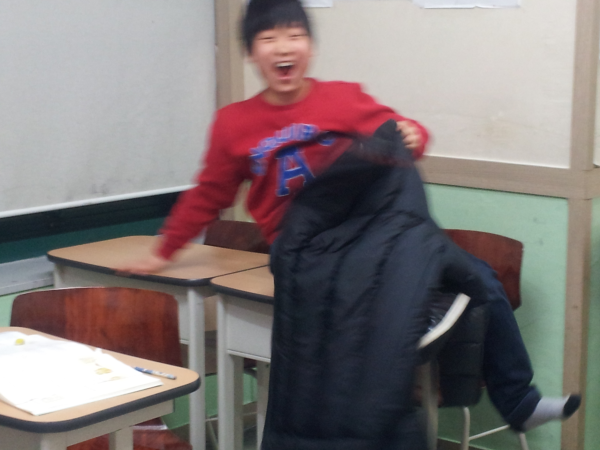 Avery averys. He notices the camera and screams, "Teeaaccheerr!! hahaha" I laugh and put the camera away. He, laughing, runs to me and gives me a hug around the waist. He regularly says "I love teacheeeer!" and he often calls me "faaatheeeer!" (I don't know why. He does this with the other teachers as well.) I ask him, "Avery, where is your shoe?!" He looks down. Then his head shoots up with surprise on his face. "My shoooeee!" He screams. We continue class after a failed search for his shoe. 20 minutes later, one of our receptionists walks in with the missing shoe. Avery left it in the bathroom, somehow in the sink. How he didn't notice it was missing until I mentioned it is classic Avery.

I have a million strange stories involving Avery's antics. The shoe incident is from several months back. Avery has since gotten older, and he has moved on from hugging to Karate chopping. *sigh* Avery, Avery, Avery.

I could spend the next several weeks sharing my amusing and uplifting memories from the classroom. These anecdotes above are just a few of the first that come to mind. Each of my fond memories from my Korean classroom, however, make the move here worth it. I’ve experienced beautiful sights atop Korean mountains, eaten interesting foods in Taiwanese back alleys, met incredible people from all over the world, and spent the past 15 months having a grand adventure. Some of the grandest parts, however, were in the often overlooked classroom.