We waited in line for what seemed like forever, then group by group the foreigners with the free ground tickets were led inside the stadium. Much to our relief, we immediately spotted rows of chairs. Considering the amount of dancing/walking we'd already done that day and the fact that 20 groups were set to perform? Our tired legs needed to sit.

The concert, which lasted several hours, was efficiently organized. Each group came out and performed two songs, which were typically their most popular, and the whole thing was hosted by Tiffany and Yuri from Girls' Generation. Throughout the show they were also promoting Incheon tourism and 2014's Asian Games, which will be hosted by Incheon. 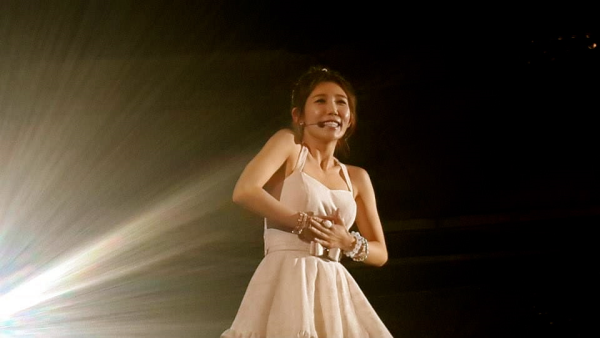 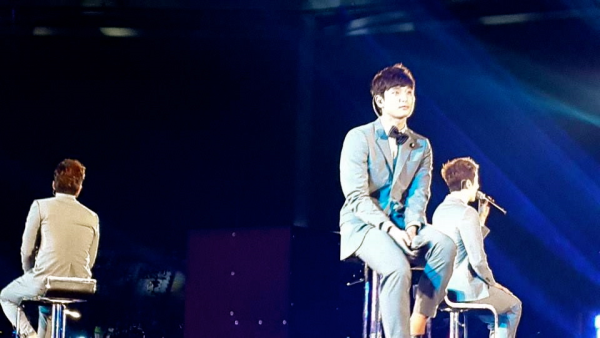 In addition to being able to sit throughout the lenghty concert, you can probably tell from my above photos: we also had amazing seats. Seriously. Amazing. The stage had two sections, and we were sitting right next to one of them. For my K-pop loving teacher friends, this was a Really Big Deal. I was mostly just happy for the excellent view. The area we were seated in seemed to be foreigner-only, with people from every possible country sitting in our part of the audience. (We'd met some girls while waiting in line who had flown over from Japan! And some of our flash mob friends were in town from Mexico!)

I even took some screencaps from the YouTube video of the concert to show you just how lucky we were to randomly get these seats: 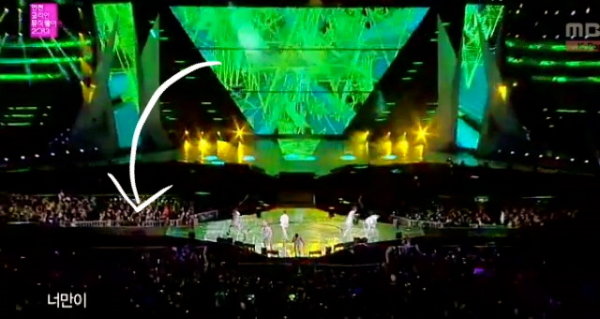 A somewhat aerial shot of the stage areas, with the arrow indicating my group's seats.

That arrow is literally right on top of my head.

While I'd call myself a live music veteran -- going to shows is a hobby of mine back home in the States, I typically go for smaller bands in little venues. I can count the number of big stadium concerts I've attended on one hand, so the production that went into this K-pop concert was both awe-inspiring and overwhelming. I'm talking giant screens, crazy lights, a helicopter camera flying above our heads, alarmingly close pyrotechnics (as in right-behind-our-heads kind of close), and so, so many fireworks. It was seriously impressive.

I can't remember the order of the groups now, but I can say I was surprised at the number of songs I recognized. I'm not actually a K-pop fan, really -- there are a few songs that I do think are fun and catchy, but I don't listen to any of it on my own. That being said, watching the show was really, really entertaining and enjoyable. Like all pop music, it's just infectious and you can't help but dance. 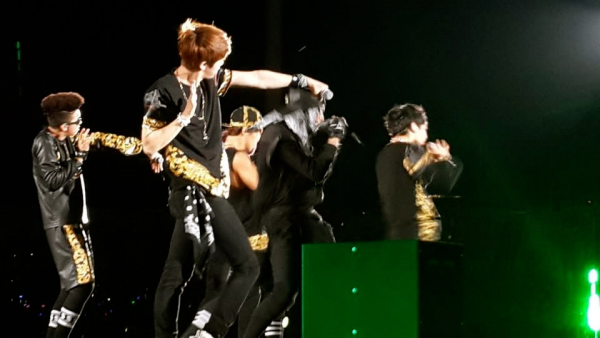 I'd also always wanted to witness the hysteria of a concert like this in person. As a former teenage girl who had her share of boy band obsessions back in the 90s, I've always been sad that I was never able to see any of them live. The "Beatlemania"-esque frenzy of the crowd is something common at K-pop shows, even to the degree where some fans have been banned from attending their chosen idol group's performances. Needless to say, I was... curious to see this for myself. 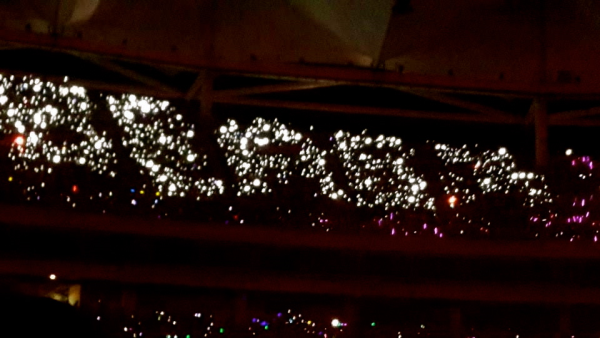 Speaking of extreme fan devotion, B2ST fans get extra credit for the above pictured feat of organization and dedication. Some of the letters, namely the "T," were having some issues getting their letter lit up, but since I can't even understand how someone goes about organizing this kind of thing, I'm still impressed. 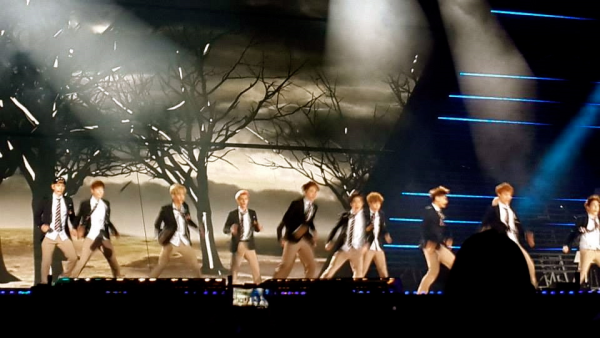 EXO-K and EXO-M, bringing down the house.

From my non-K-pop fan standpoint, I have to say the highlight for me was EXO. I know they're the "it" band at the moment, but they were legitimately good. Between their vocals, the staging, and their dancing, I felt like their set was one of the best. (Quite a few of my students were immensely pleased to hear that EXO was my favorite of all the groups -- I think I won some major points with them for that one.) 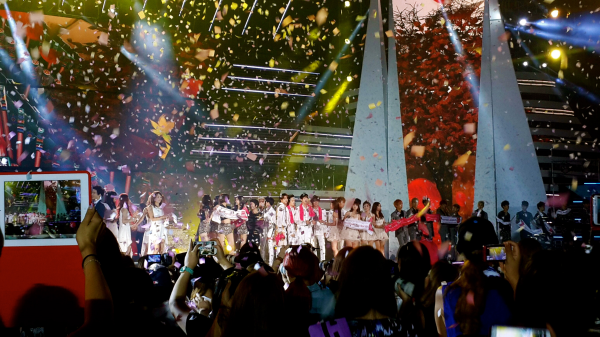 Everyone coming out for a final bow!

At the end of the concert, all the groups came out to wave goodbye and throw some souvenir printed towels out to their fans. This was the one and only moment when I thought, "This is actually getting frightening." Throughout the concert, the crowd had been extremely orderly. Security had patrolled the aisles, making sure everyone remained seated and didn't try to climb over the barricade. However, all rules of decorum were quickly abandoned when these groups were pacing the stage behind my head, preparing to toss these towels into the audience. Do not, under any circumstances, get inbetween a teenage girl and the object of her desire. 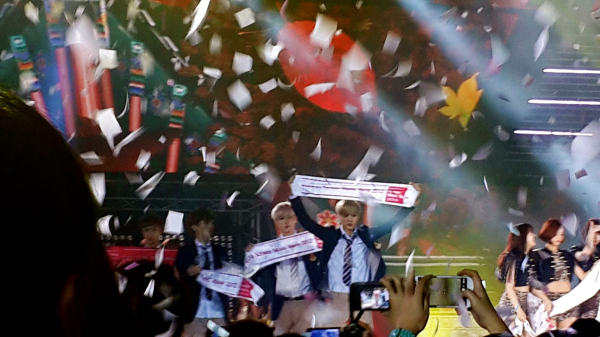 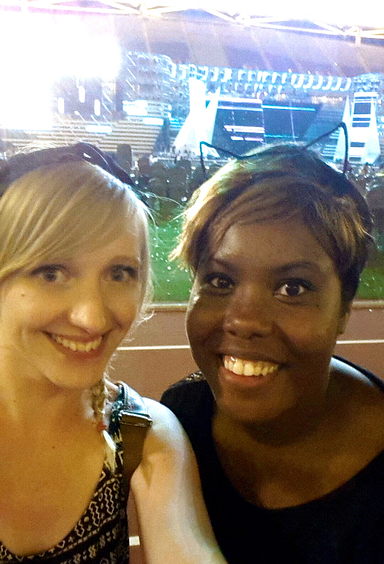 Reaction shot post-encore bows from the idols. Gotta love the expression of happiness and fear on my face.

After our brush with teenage girl insanity, it was finally time to go home. Worn out and covered in confetti, we stumbled into the queue of fans slowly leaving the stadium. All of our fellow flash mobbers were buzzing with excitement, amazed at the show and our incredible seats. I have to say, as far as promotions go for a city's tourism, this was pretty cool.

I'm happy that I've been able to cross "See a K-pop concert" off of my Korea Bucket List. Plus the fact that I was able to attend because of participating in a K-pop flash mob around my city? Even better. Definitely a day from my life in Korea that I won't ever forget.

Have you been to any K-pop concerts? Any groups you'd really like to see in Korea? Leave a comment below!