Busan for Chuseok: A Mini Vacation

Every year, many Koreans look forward to the late September holiday, Chuseok. The celebration lasts for three days as almost all Koreans abandon their jobs to visit family. Many parts of Korea turn into ghost towns. So what do we family-less expats do with our two or three days of Chuseok vacation when nothing is open? Some relax at home. Some visit Jeju, Korea’s exotic getaway island. Others, like myself, head down to mountainous Busan, which is Korea’s second largest city. It’s also a great beach town. 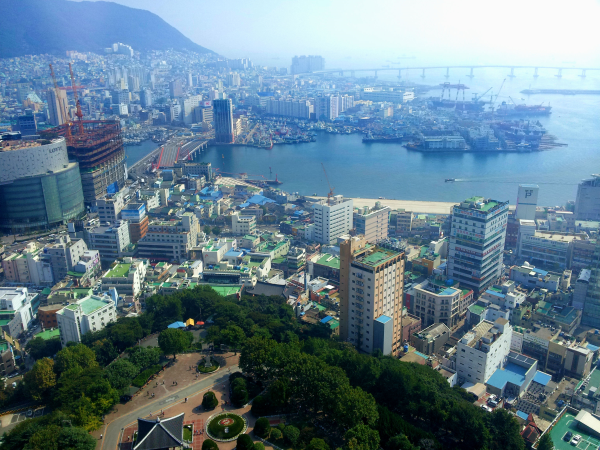 This picture only shows a small sliver of the city. Busan is huge, as you might imagine. It’s not anywhere near Seoul’s 25 million people, but almost 5 million South Koreans call Busan home. So as you can imagine, there is a lot to do and see in this port city.

Busan is home to a few worthwhile temples. I visited two during Chuseok. The first was Haedong Yonggungsa. This largish temple was carved into the rocky cliffs against the oceans. It’s known to get windy here, so there are signs before entering the temple grounds warning that you will probably get sprayed with a lot of sea water. Luckily, it wasn’t too windy on the day we went, so we got to enjoy the sound of crashing waves while exploring a very beautiful temple. 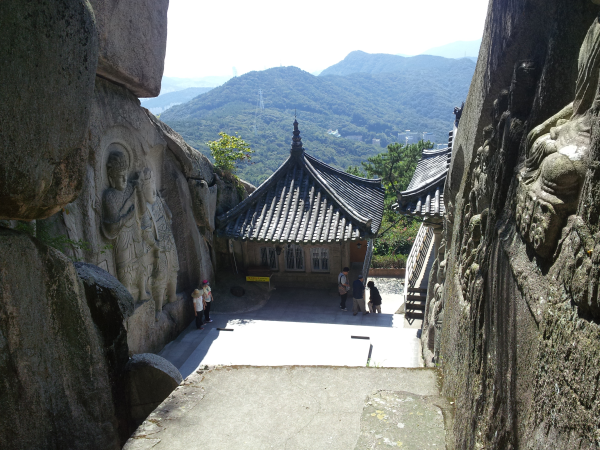 The second temple we visited is my favorite in all of Korea. Perched atop one of Busan’s many mountains is Seokbulsa. I've hiked up to this peak three times. Each time, the small temple is as awe-inspiring as the first time I came upon it. After a moderate two hour hike and a bit of getting lost, the temple is a justifying reward. The giant stone buddhas carved into the stone walls around the prayer square are like something out of an Indiana Jones movie. I’ll be lucky to stumble upon anything as unexpectedly beautiful as Seokbulsa again.

Here is more information and detailed instructions on how to find Seokbulsa.

Busan has two must-visit beaches. One is Heundae. It is the largest and most popular. The Busan International Film Festival is held on the sands of Heundae's soft, pale beige sand. It has an impressive cityscape in its backdrop. However, my favorite beach is pictured above. Gwangalli Beach is less crowded, and more relaxing. The best part of it is the amazing breathtaking view of Gwangalli Bridge. The bridge spans the entire harbor and is beautifully lit from one end to the other.

There is plenty to do at the beach. Many ajjumas wander up and down selling roman candles and other fireworks. There is a small light show projected onto fountain sprays over the ocean. And there is a boat rental that charges 10 bucks per person for unlimited time in the large harbor. Three friends and I got in two boats and paddled out into the middle. We pretended we were going to paddle to Japan. We may have been drinking too much makgeolli, a yummy rice-wine. At one point, we placed a paper in a bottle and sent it floating into the ocean with the wind. I wonder where it is now.

Toward the end of the 4 day getaway, we visited Nampo fish market. Seafood sellers displayed some exotic catches like huge craps, various kinds of octopi, and strange snails I had never seen before. At one point we saw a guy preparing fish to be sold at a nearby restaurant. He had a tank of strange long fish. He’d grab one, nail it to a board, and dismantle it in under 20 seconds. I was impressed. Don’t think me heartless. however. All the animals in the tanks weighed on me a bit. C’est la vie.

When we passed by one lady’s booth, an octopus had climbed out of a tank and was making a beeline out of the place. She casually picked it up and dropped it back in the tank. This seemed like a regular occurrence. We laughed. She grabbed the octopus again, and she plopped it in the hand of one of my friends. After some negotiation, we agreed to eat the thing alive. It had been on my bucket list to eat live octopus. The lady took us upstairs to the restaurant area. She set us up with drinks and side dishes. 10 minutes later, she returned with a platter of diced up, wiggling tentacles. It was our moment of truth. We all struggled to keep one in our chopsticks. When we got a firm grasp on one, we’d dip it in some soy sauce, and down the limb. It was actually pretty good. A little bland, but not bad. Check.

On the last day of our trip, we went to Busan Tower. A tall structure with a cafe and observatory at the top. The view was incredible. It was a clear day, and I could see from the distant mountain peaks to the ocean’s horizon. The most impressive thing about the view was that I couldn’t see my hostel. Busan is a sprawling city that follows the contours of the hilly terrain below it. If you visit Busan, definitely check out this view.