Seoul Reveals its Soul in an International Cook-Off

One of the great things about living near a major capital city, specifically the second largest metropolis in the world, is all the cultural experiences available. On a cool, dim, and damp Saturday last month, a friend invited me out to the Han River to enjoy the fruits of a cooking course he had been attending for several Saturdays in Seoul. 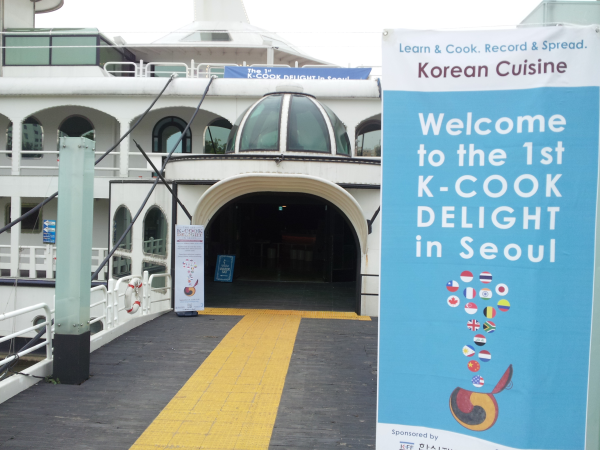 The event, called K-Cook Delight in Seoul, was sponsored by Inspired Steps, a company that promotes cultural experiences in Asia, and the Korean Food Foundation, which promotes Korean cuisine. The 20 plus students and professional chefs cooked the final versions of the Korean-Western fusion dishes they had spent the class perfecting. The cook-off was held on a large boat docked on the river. I estimate that a couple hundred people were in attendance, but there was plenty of free food to go around. 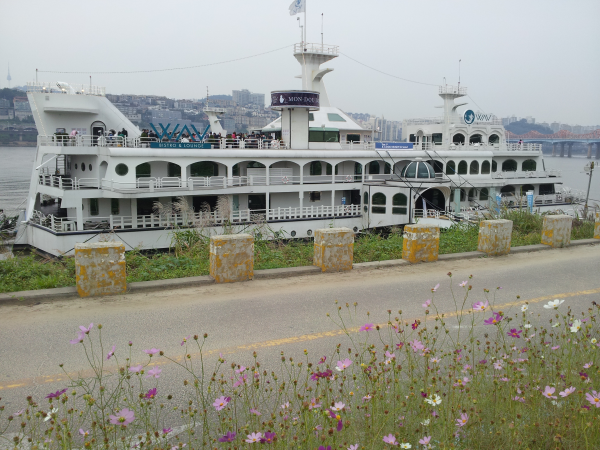 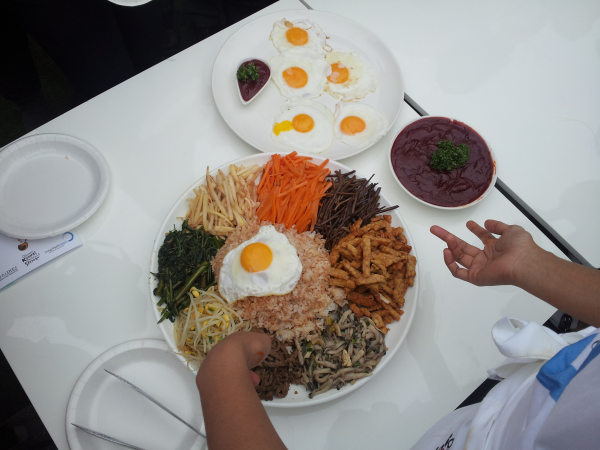 Despite the unruly vultures that swarmed on every dish that was wheeled out, a friend was able to try this western influenced bibimbap. It came with all the expected elements, like a host of tasty vegetables, rice, and fried egg. The chef also added, however, a kind of paste made from spicy salami and butter beans. With a splash of lemon tomato sauce, the dish was definitely a bold fusion experiment. 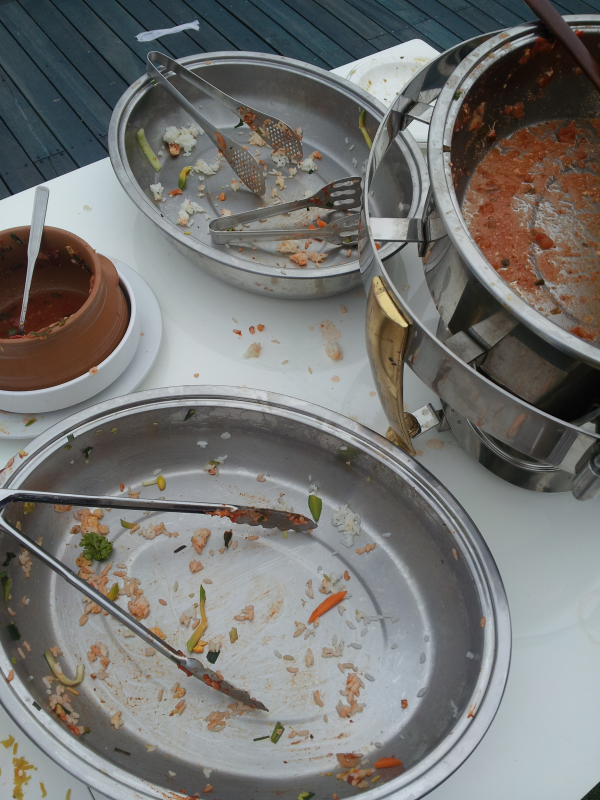 As I mentioned, there were a number of vultures that crashed the dining tables. When a dish was wheeled from the kitchen to the buffet tables, no line could be discerned, and no courtesy respected. It felt more like a football huddle where the food was the quarterback and the guests were zombie players that wanted to eat the quarterback’s face. I think I actually heard a few of the attendees moan “Foooooood.” My friends and I were pretty disappointed with the crowd’s behavior. But I guess all’s fair in love and war and fooooood. 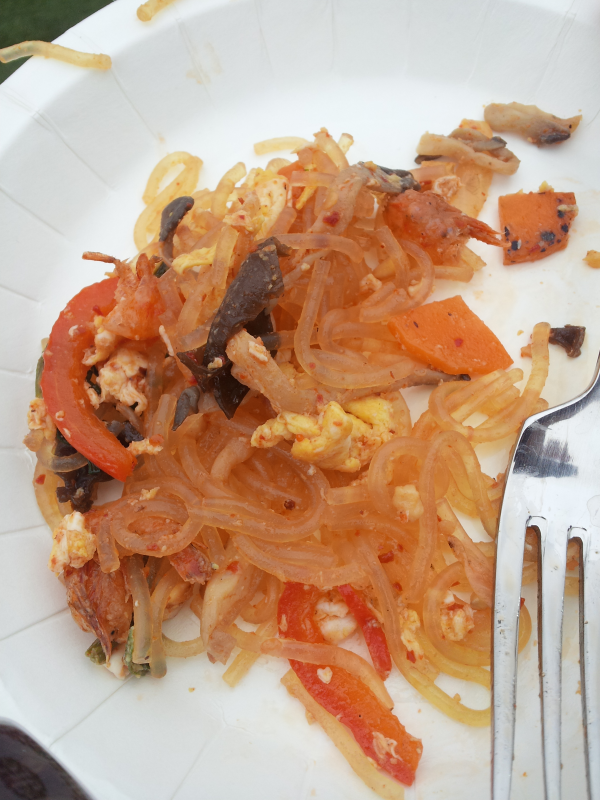 Here is what I tried. It was a tasty noodle dish with egg, bell peppers, other vegetables, and nuts. I didn’t catch the name on the plastic plaque before someone ate that, too. 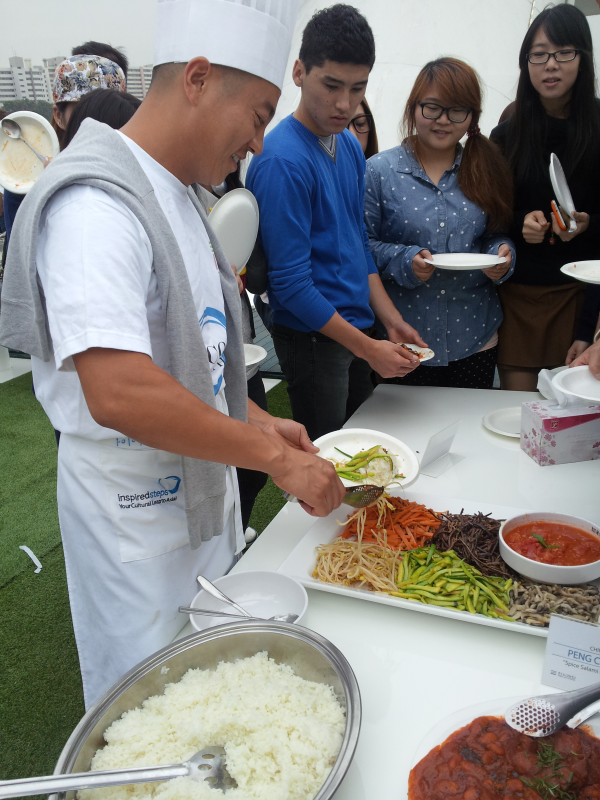 This chef was smart. He made everyone get in a line while he served the dish. The zombies were not happy with him. I haven’t seen him since... 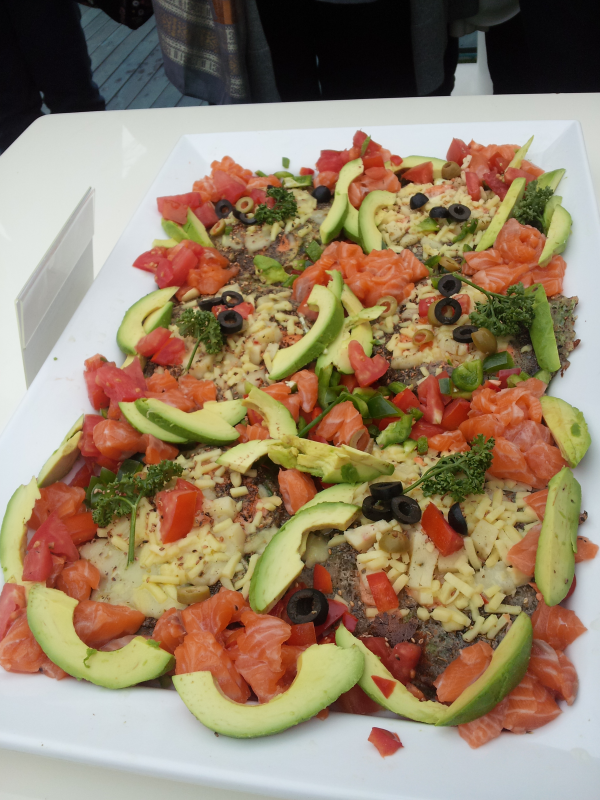 Appropriately enough, meet Zombie Pajeon. The chef introduced it as being “so good that people from the other side want to eat it.” It looked amazing. AVACADOS! But it turned out to be too ambitious. I think the chef threw into it every ingredient he could get his hands on. But at least he was bold enough to give it a go.

Breton-style Pajeon. I’m not sure what makes it Breton style. The guests ate the chef before I could ask him. The pajeon was pretty different from any kind I’ve had. It had less of a fried taste and more of a sweet, doughy taste. I could definitely see this in London’s Koreatown, if it has one. 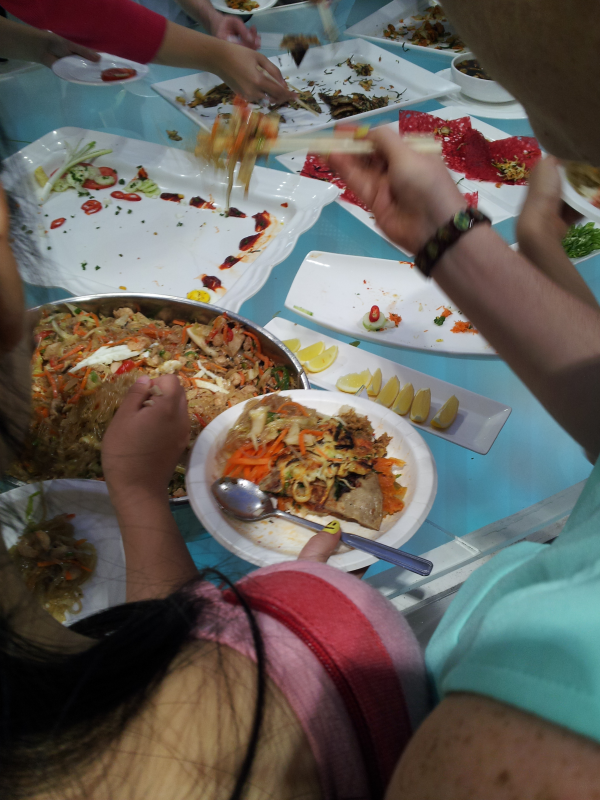 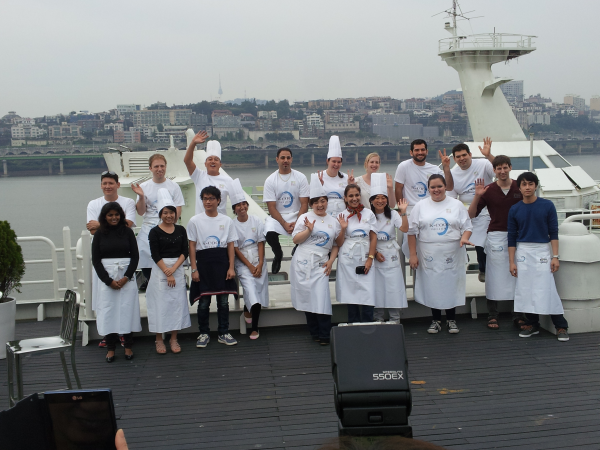 And of course, because this is Korea, there was a random rock festival getting started on the lawn in front of the boat. After filling my belly, it was nice to grab a beer from the little 7-Eleven parked in the middle of the park and sit down to chat with my friends under the drizzle while listening to this Korean Black Keys cover band. Oh, Korea.

Tags: cook-off, a year in Korea, seoul, what to do on the weekend, events in Korea, food in Korea, Activities to do in Korea, Weekend activities in Korea