Four countries. Fireworks Festival. And the Han River. Sounds like a lovely fall Saturday evening in Korea, right? After hearing good reviews from last year's festival, we decided to hit 2013's International Fireworks Festival in Seoul, which was to feature fireworks from Korea, Japan, France, and Canada. Setting out with the vision of a picnic on the bank of the Han while watching fireworks overhead, we soon realized that it wasn't going to play out quite as we'd imagined... Turns out, it's pretty easy to completely bungle an excursion to this festival. Here's my review of the festival as well as some advice on what not to do if you're planning on going in the future... 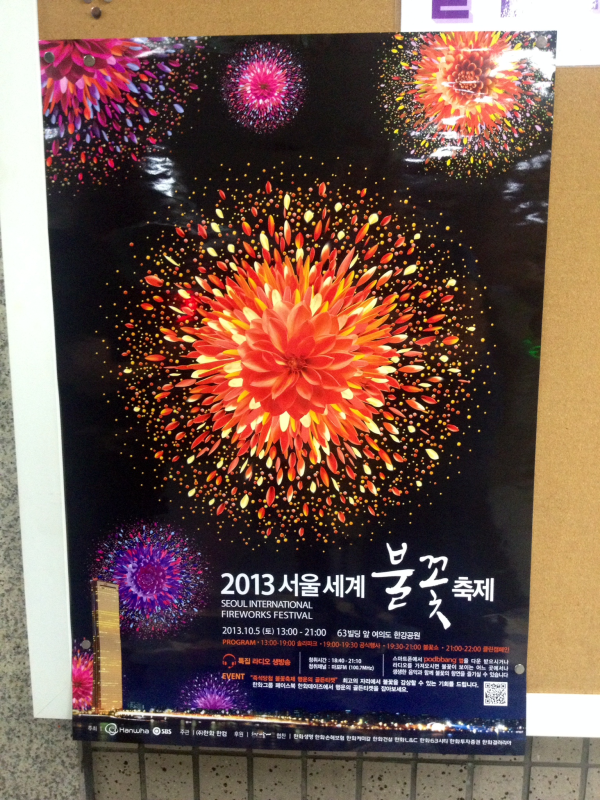 Our first mistake was trying to get to the festival in the evening. Fireworks were set to start at 7:30pm, so thinking we could zip in on the subway around 6:30? Yeah, right. Plans to arrive earlier were derailed by getting sidetracked with gift shopping in Insadong... We should've taken it more seriously when, around noon, our metro train passed over the Han and we noticed countless tents dotting both banks. As we walked through Jongno 3(sam)-ga Station to transfer onto Line 5, we immediately regretted our decision to arrive so late... 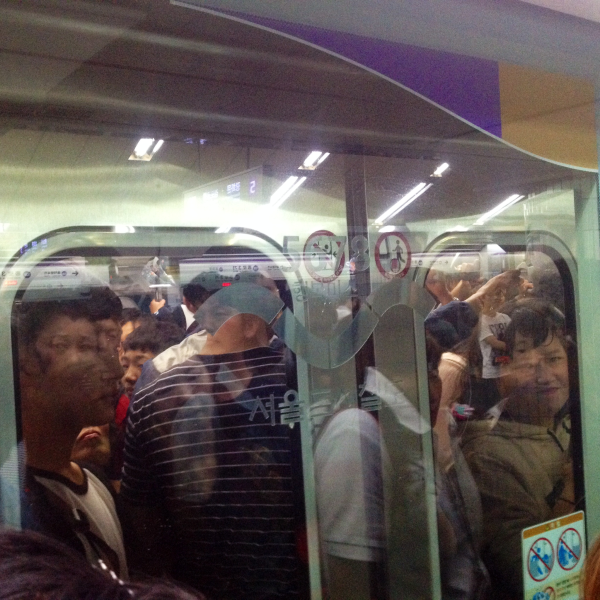 Squashed against the doors, but still smiling?

We waited thirty minutes just to get on a train. We saw several pass us by, with the queue inching slowly forwards as each train only allowed a handful of people to step aboard. And when we finally got on the train? Well, it was basically like being sardines in a tin. Never, in nearly two years of going all over Seoul on the majority of the weekends, have I ever been on such a crowded subway car. 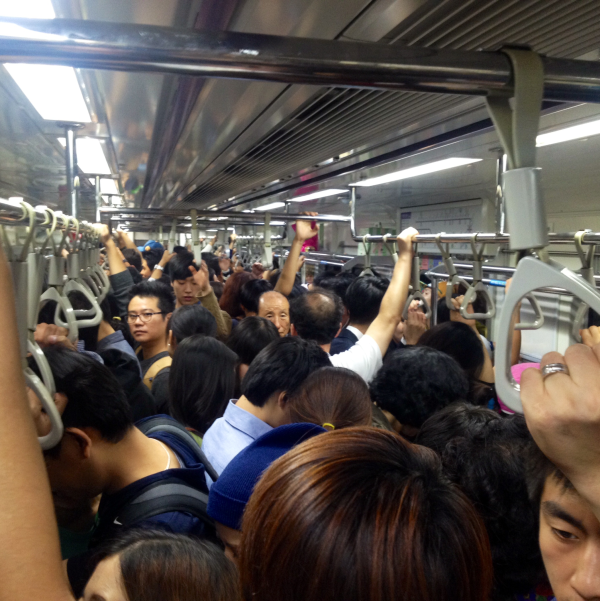 Who needs to hold on when it's physically impossible to fall over?

The remarkable part of this, and of the festival itself, was how good-natured everyone seemed to be. No matter how frustratingly crowded the subway may have been, everyone was smiling, their faces saying, "Well, we're all in this together." Crammed into the subway car, unable to move, we all shifted and swayed with the train. What should have been a miserable experience was made to be entertaining by the choruses of "Whoooooaaaaaaa!" and "Ohhhhhmygod!" Instead of insults and curses being thrown at strangers, smartphones were being held up to document the insanity.

Fifteen minutes or so later, our conductor announced that our train would not be stopping at Yeouinaru Station, the one closest to the festival, due to the station being overcrowded. We decided to hop off the train at Mapo Station and just walk until we found a good fireworks viewing spot on the nearby bridge that goes over the Han. 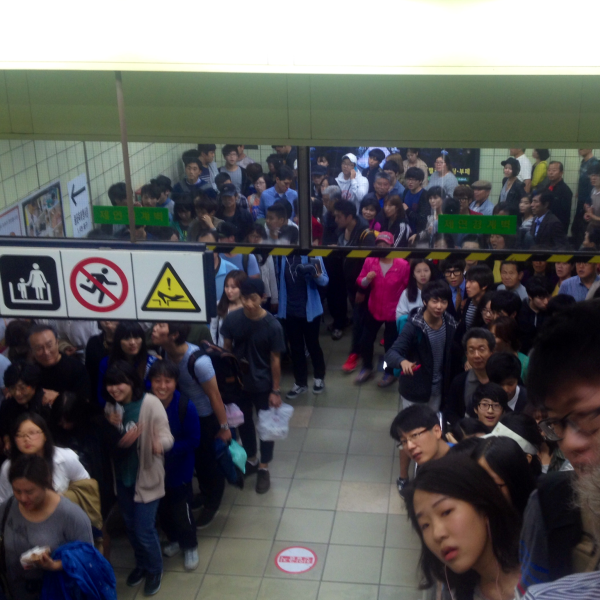 Patiently waiting for the escalator. 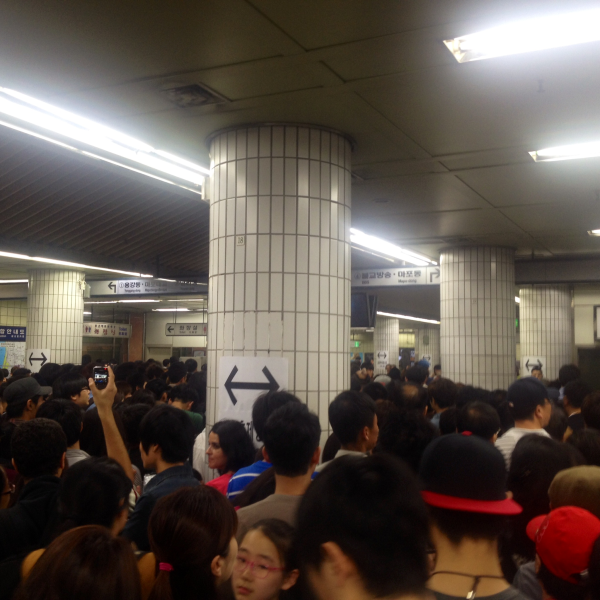 A lovely bottleneck due to the subway turnstiles.

Walking up to the festival, we saw tons of street vendors selling food, drinks, and a variety of light-up toys for the kids. There was a steady stream of people walking to the bridge -- so many that the four lanes of traffic were reduced to one. As we walked onto the bridge, the crowd just sort of... took over the lanes. The police had to direct the cars around the crowd. 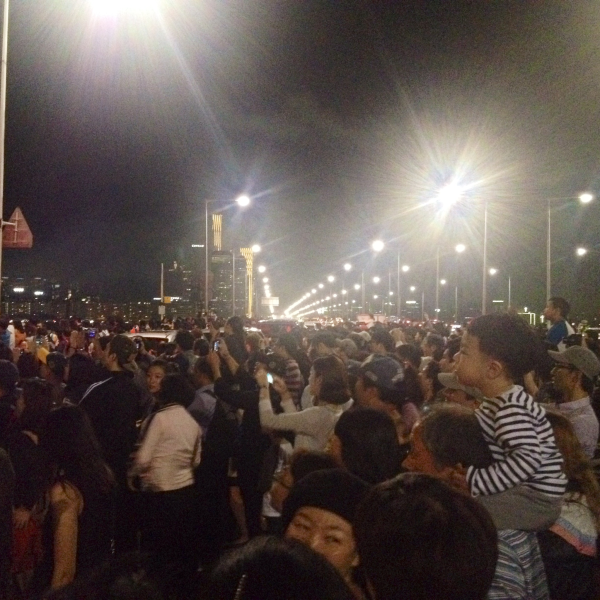 Taking over the street... Sorry we're not sorry.

Finally, the fireworks began. It was your standard fare when it comes to fireworks: big, colorful, sparkly. Some were also super fancy, showing off some intriguing advances in fireworks technology. There were even a few types that I haven't seen before, like some that seem to hang in the air while sparks cascaded toward the river. Unfortunately, I was always too late with my camera to catch any of the super cool ones -- I was too busy watching them! 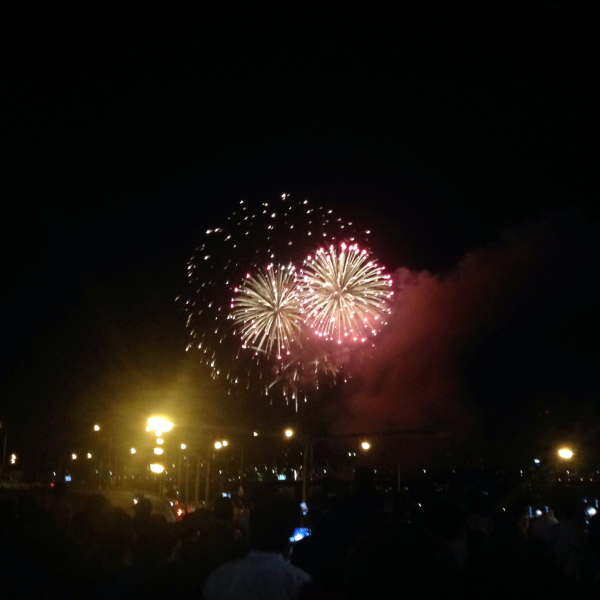 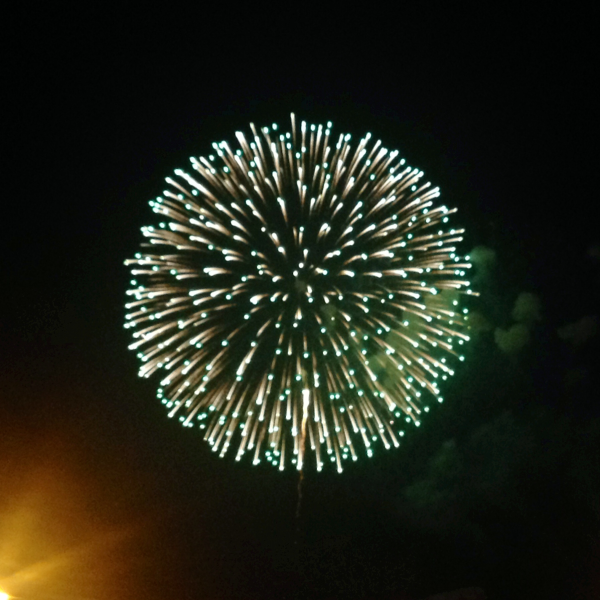 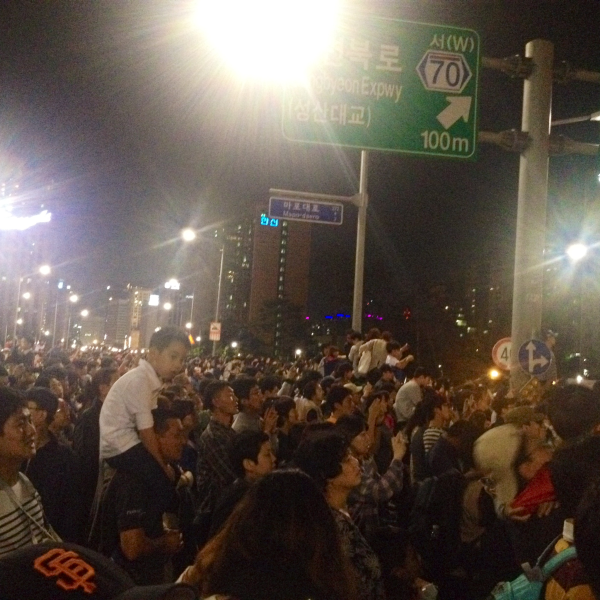 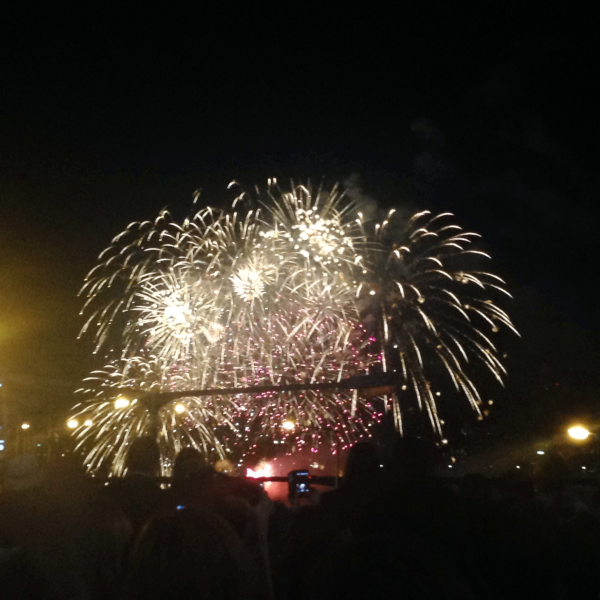 I think my favorite part of the show was the collective "Waaaaaa~!" that would come from the entire crowd during particularly impressive displays.

We ducked out of the festival early, hoping to beat some of the traffic. It was fun, but I really wish we'd been there earlier. That being said:

Words of sage advice for next year's festival:

1. Get there really, really early. I'm talking like 1pm. Just pack food, beers, and a blanket. Then head to the river and stake out a spot.

2. If you're coming in late, don't plan to go to Yeoinaru Station. It's common practice for them to shut it down, apparently.

3. If you're trying to meet up with friends, best of luck. Cell service was barely working, and with literally a million people milling around, it's going to be extremely difficult. Either set a specific meeting place or just figure you'll find your friends after the festival.

4. Have a good attitude. Everyone was so jovial, despite the insane crowd. So keep that in mind and pay that same attitude forward to everyone you encounter.

5. Further incentive to get there early for some close-up spots: I heard from friends that the fireworks display is actually set to music, which we were too far away to hear.

Overall, it was a fun evening. I would definitely do a lot of things differently, which I'll keep in mind if I'm still around Korea this time next year. The festival looks like a lot of fun, when you do it right, so I recommend going if you get the chance!