One of my favorite things to do on the weekends is to go see a movie. I was worried that while living in Korea I wouldn't be able to satisfy this past-time, but I had nothing to fear! In Korea, there are plenty of English movies with Korean subtitles, and all the big blockbusters, like Thor this week, are getting a great viewing. 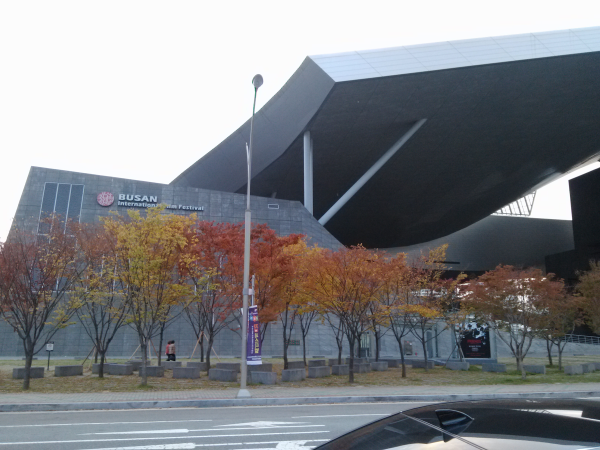 First view of the Busan Cinema Center, just in time for the changing leaves of fall.

There is an English film playing at pretty much every movie theater in Korea, that includes Megabox, Primus, and CGV theaters. However, they do cycle through the different movies quickly, so, if you really want to see a certain blockbuster, see it as soon as you can! You should also consider catching it in 4-D. 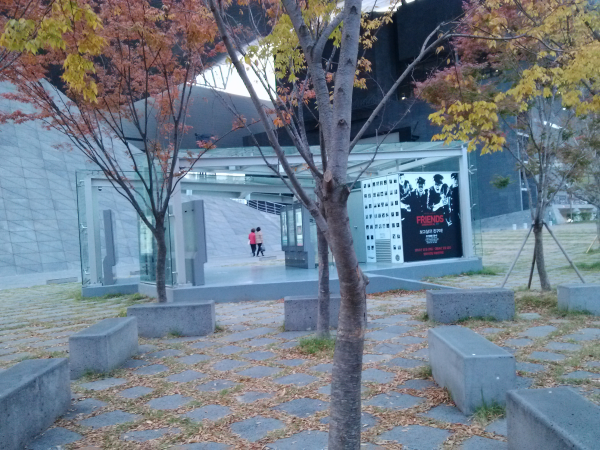 Fall leaves close up, and an interactive box where you can see what movies are playing when, and where.

For this particular weekend, I decided to check out Busan's best movie theater, the Busan Cinema Center. Although the Busan International Film Festival had just ended, I craved more time there, and another movie. 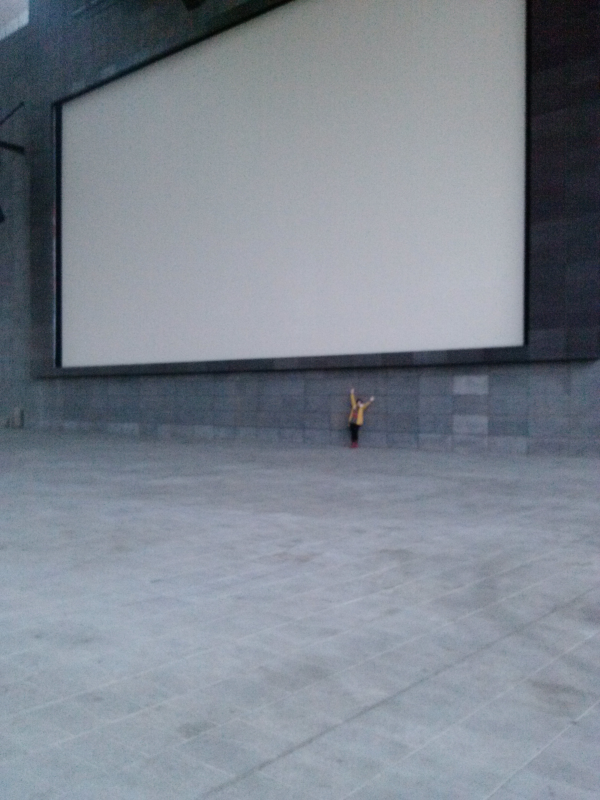 The big screen! For outdoor viewing.

The Busan Cinema Center offers three movie theaters, one outdoor theater, and one performing arts theatre (Haneulyeon) in three building structures. There is the Cine Mountain, BIFF Hill, and Double Cone. The architecture of the place is really amazing. It was created with a deconstructivist approach by an Australian design firm, and cost around 150 million U.S. dollars. 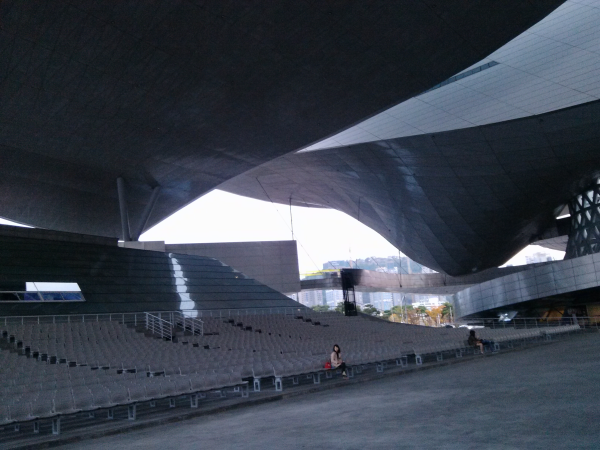 The audience area for an outdoor screening, there are 4,000 seats!

During the summer there were free outdoor screenings of Disney classics (like Wall-E), among other films, but now that the weather's gotten a bit chilly, the outdoor theater space is more of a meeting place. 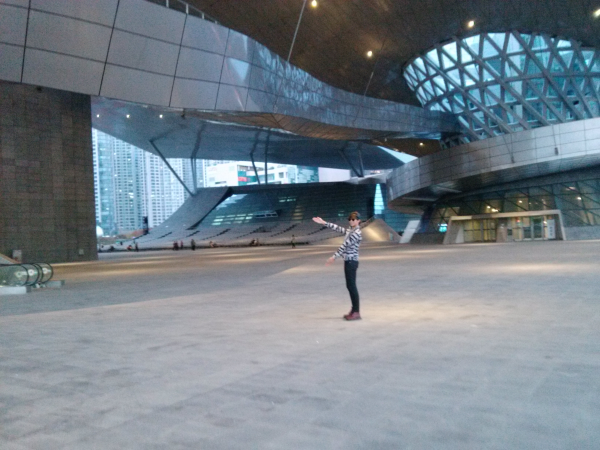 The Busan Cinema Center holds the Guinness World Record for largest roof in the world. The roof also boasts 42,600 LED lights that look amazing at night. Under that roof they show all kinds of international and independent movies, all of them at regular movie prices (6,000 won, around $6). They also put on Operas at the cultural center nearby. 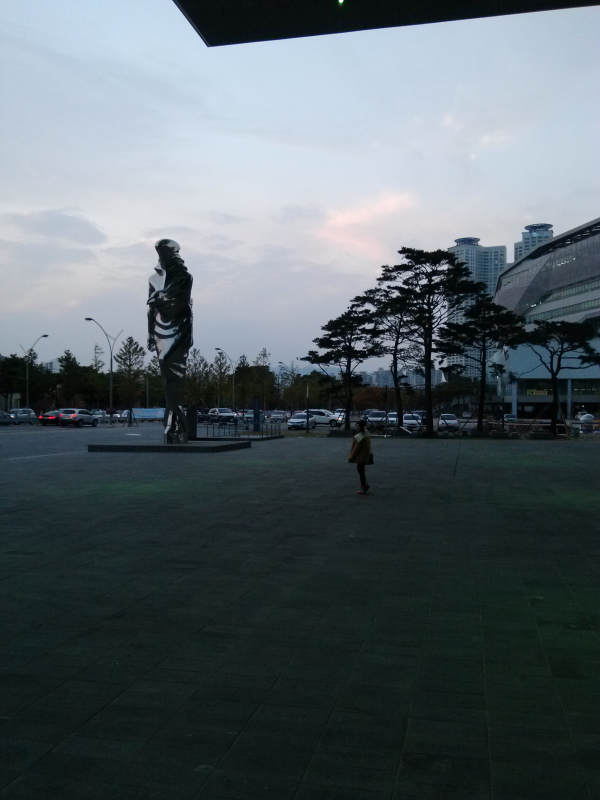 A cool statue by the entrance to the movie theaters.

Just walking around the area and talking after a movie really creates a great evening, as there is a lot to explore nearby, like Naru Park, which lines up right against the ocean, and Shinsegae, which consequently holds the Guinness World Record for largest department store. 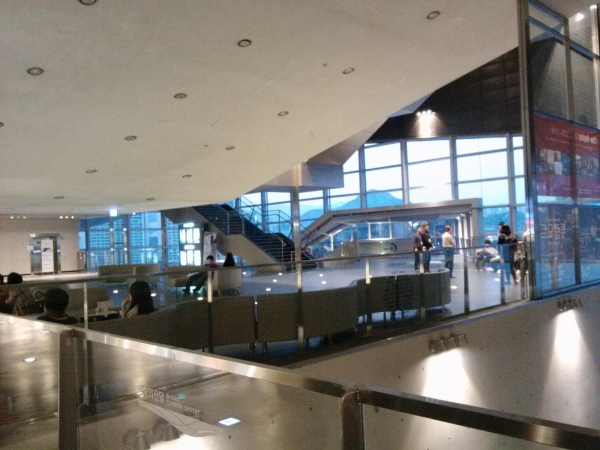 Once you take the escalator up to the movie theaters, you'll find the inside of the Center is just as modern and elegant as the outside, and there is plenty of room to lounge. 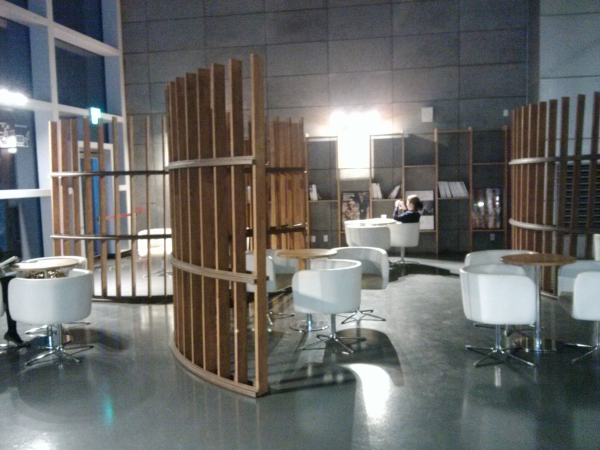 There is also a quiet reading library with computers available for further research on the film you're about to see! 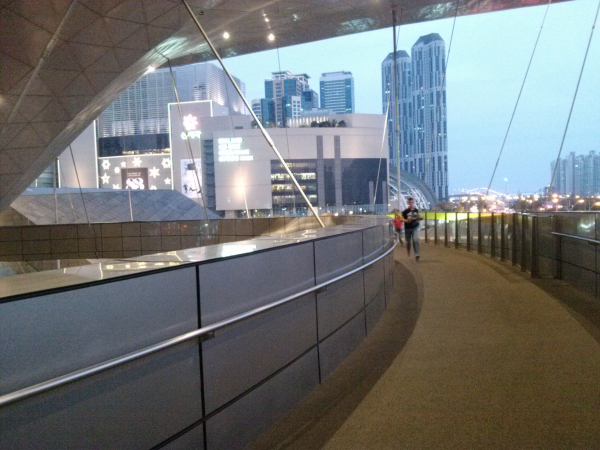 View from the top, of Shinsegae straight ahead!

If you're traveling to Busan, the Cinema Center is not to be missed! To get there, take the Green Line 2 and get off at Centum City. Go out Exit 6 and walk straight past Shinsegae until you see the red KNN building on your left. Take that left and you cannot miss the Busan Cinema Center. Have an awesome movie night!