The Olympic Winter Games in Pyeongchang, South Korea, starting on February 9, 2018, will be the second Olympic games hosted in Korea. The first Olympics, hosted in the summer of 1988, rocketed South Korea into the lime-light of the world, showcasing that they were truly a first-world nation. Since Korea’s first Olympics, the country has developed much further, and has become even more of an economic powerhouse. South Korea has become a country with one of the best transportation systems, one of the strongest democracies, maintains a strong international presence, and boasts the fastest internet in the world. So, with the upcoming Olympics, South-Korea, internationally known for its dramas and K-pop, will once again be cast into the lime-light, drawing international investment once more. And while many countries have suffered economic loss because of the Olympics, there is strong evidence to support that the games will boost South Korea in multiple ways.  In this blog I will talk about how Korea still utilizes some of the venues from the 1988 games, along with tips for ways you can enjoy the upcoming Winter games during your time teaching in Korea. 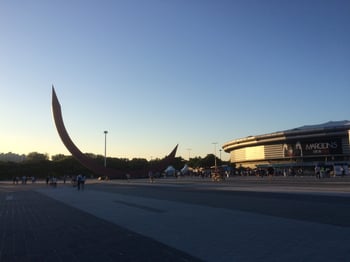 In 1988, South Korea hosted the summer Olympics, turning a profit of roughly 120-300 Million dollars (US). However, the benefits continue for South Korea. The stadiums that were created for hosting are now used for multiple events throughout the year. The baseball stadium that was used for the Olympics is now home to two professional baseball teams. The main stadiums have also been in use as concert venues. Within the past two years, the parks have held Coldplay, Maroon 5, Ed Sheeran, as well as many other artists both international and Korean. The parks continue to be well maintained with visitors coming every day. 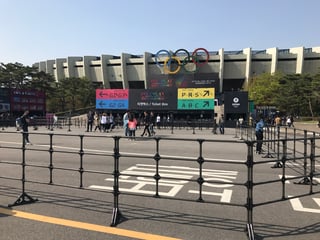 At Olympic Park Station, away from the main stadiums, many visitors come to rent bicycles, walk along the nice waterfront, see the many beautiful flowers, as well as stop for food and coffee. And while the economic boost to these parks is measurable, the boost to Korean society and culture is invaluable. Due to the parks’ beauty, many Korean families come and have a day out together. This is great for Korean society, and is such a stark contrast from where I live in the states. Families are always out and about, spending time together on the weekends, and really growing and maintaining their family bond. Also, the parks have a positive effect on Korean health because it helps sustain Korea’s culture of exercise and local tourism. These effects are difficult to be measured, but they also have indirect economic impact as well. 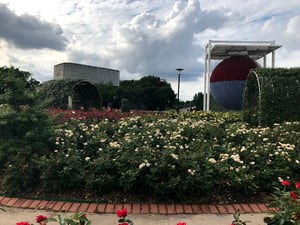 Now, to contrast with the upcoming Winter Olympics, the games for 2018 are located outside of Seoul. The parks have a disadvantage for use after the games because of their distance from Seoul. It currently takes around three hours to get to the area from Seoul. However, there are plenty of people who will come and use these parks, and already the area has been an important spot for hiking and winter activities. Also, Korea has built the path for a super fast train, 250 kmh or 155 mph, from Seoul to the parks that will only take one hour, allowing for less than two hours from Incheon airport. This train should be ready for use soon. Seoul has a population of around 10 million people, and all of these people need to go somewhere. Hiking is one of the greatest pastimes in South Korea, it is nearly impossible to go a day without seeing someone in a hiking outfit. With the stadium located near the mountains, South Koreans and foreigners will continue to flock to the area in order to go hiking during the warmer months. And during the winter months, the area has already been used as a ski resort, so its use will potentially increase post Olympics.

As previously stated, South Korea has built a connecting rail to the city that goes from Seoul to Pyeongchang in an hour. Currently, to get to Pyeongchang it takes roughly three hours. There are bus stations within Seoul that go near the area, and then another bus needs to be taken once you are a bit closer. Once the new train is in place and functioning, it will be incredibly easy to get there! South Korea has been rated within the top ten best countries for transportation, and even cinching number one on a couple of opinion pieces. South Korea’s transportation system is incredibly easy to use and you can get anywhere within Seoul quite easily. While many of the past Olympic cities have struggled with transportation, Seoul will easily dominate, allowing for all to use its system with minimal to no issue. 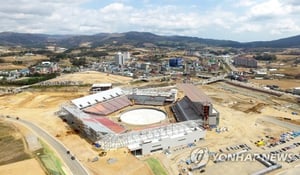 South Korea is building six facilities, as well as the train, in Pyeongchang. The total cost however will only be 1/4th of the cost of the Sochi Winter Olympics. The facilities will be in conjunction with current infrastructure, totaling twelve buildings, and all projects are projected to be completed by October, 2017. With all of the new buildings and people coming, food will take priority as many restaurants have been moved into the area. Also, the Korean Tourism Organization (KTO) has been boosting the popularity of the area by having a number of events, as well as bringing in a number of artists from around the world who will create pieces based on their experiences in the area.

If you are interested in watching any of the games in person, tickets can be bought right here. The prices vary based on sport and the round of competition, with the lowest prices at around $40 (US) and the highest prices at $1,500 (US). However, with all once in a lifetime events, the experience can definitely outweigh the cost.

Having lived in South Korea for three years already, I am very excited to see the impact of hosting the games on Korean society. I’m also very excited to get to venture to the newly developed area to spot out the new stadiums and attractions. So, if you want to come to Korea to teach and adventure, feel free to create an application through Aclipse. If you have any questions, feel free to comment below.