This past weekend was significant on many levels as a English Teacher in Korea at ChungDahm. For one, it was the weekend before a new term at ChungDahm began and secondly and probably most importantly it was the Lunar New Year holiday.  As a result of the holiday we had a four day weekend which meant a few friends and I decided to travel to Hong Kong to refresh before the new term began.  Now squeezing the contents of a 4-day Chinese whirlwind adventure into a single blog seems like an injustice, so this week I will give you three must-see attractions to visit in Asia’s most dynamic and multi-cultural cities. 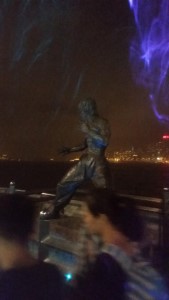 Hong Kong, although now a Chinese city, was ruled by the British for much of the last century and a half. As a result there is a heavy Western influence upon the city, and you will find many areas of the city featuring English names. One example of this naming trend is with Victoria Peak, arguably the most famous attraction in the city. Located on the western part of Hong Kong Island, Victoria Peak provides a breathtaking vista of Hong Kong, which has one of the most spectacular skylines in the world due to it being the world’s most vertical city.

Getting to Victoria Peak is quite easy, as you can take either a cab or a tram to the top. Since Lunar New Year is a peak travel time, the tram was in high demand, and we were not willing to spend the two-hour waiting time required to ride it.  My friends and I settled on taking a taxi, which cost around eight dollars, a pittance when considering the views you are treated to upon your arrival at the peak. Unfortunately for us, we chose to delay our Victoria Peak adventure until the last night, which also happened to be a particularly foggy one. Needless to say, our view was significantly hampered, however it was still a memorable experience and it is definitely a spot that any Hong Kong visitor should put at the top of their tourist list. 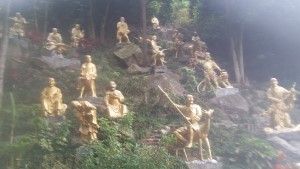 Another must-see destination in Hong Kong is the Monastery of 10,000 Buddhas, located in the Sha-tin District. While you may think this number is hyperbolic, I assure you it is not, as there are actually more than 12,500 Buddha statues. The stair climb up the steep hillside to the monastery itself may be a bit arduous for those faint of heart or simply out of shape, but I assure you it is quite worth the sore hamstrings the next day. Along the stairs, golden Buddhas flank you on both sides, all of which are in their own unique positions with their own individual facial expressions. Upon reaching the top, there is a complex of pavilions, towers, and halls that display even more Buddhas and other beautiful sculptures. The pervasive smell of burning incense dominates your nostrils, but it is far from unpleasant.

3. The Avenue of Stars 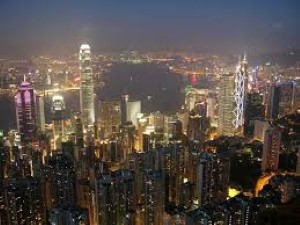 Finally, a ride on the ferry across Victoria Harbor to Kowloon’s Tsim Sha Tsui district and a visit to the Avenue of Stars on the waterfront is also imperative. The Avenue of Stars is a walking path modeled on the Hollywood Walk of Stars, and while it allows you to learn about some of Hong Kong’s most famous names from the silver screen, it also gives you a fantastic view of Hong Kong Island’s legendary skyline across Victoria Harbor.

Hong Kong is a great place to visit while teaching English in Korea because not only is there so much to do, but it is also a short trip.  If you are looking for a place to visit during a long weekend, such as the Lunar New Year Holiday, then I highly recommend going to Hong Kong.