3 Reasons To Go To The Jinhae Cherry Blossom Festival 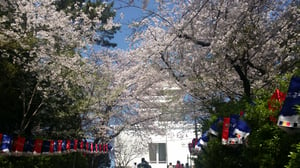 Jinhae is a small town located near the southern tip of Korea. From Seoul, it is about a 4 hour bus ride but from Busan, it is only about an 1.5 hours. Every year, over 1 million visitors will travel to this area to experience the Cherry Blossom Festival in full bloom. My two friends and I decided to go to Jinhae with our friends from the Seoul Hangout, Travel and Hiking Group. Using the Seoul Meetup App, it is a great way to make Korean and ex-pat friends while traveling around Korea. 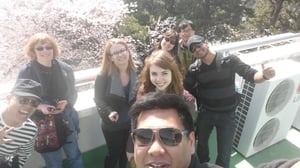 Leaving from City Hall Station in Seoul late in the evening, we arrived in the Jinhae area about 4.5 hours. It was early in the morning and nothing was open, so many of the people decided to stay on the bus to get some rest. Little did we know, we were parked outside the first reason why you should go to the Jinhae Cherry Blossom Festival...... 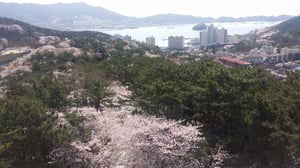 1. Gyeonghwa Station - Gyeonghwa Station is a few minutes drive away from the downtown festival, however at 5:30 in the morning troves of people were already gathered waiting to watch the sun rise over the cherry blossoms. This place is iconic, because this train station (served by the Korean National Railroad) runs through a cherry blossom field. Only 8 trains go through this station daily so you must pick the best times to arrive there. Unfortunately, due to the time we arrived we missed the train, however having seen videos of the train arriving to the station I can tell you it is definitly worth checking out.

2. The Jinhae Naval Academy - The second place you must visit when you go to the Jinhae Cherry Blossom Festival is the the Jinhae Naval Academy.  I heard from our guide that they only open up the naval academy one time a year, and it is during the festival. Also, the town is famous for its Naval parade where they celebrate Admiral Yi Sun Shin’s victory over Japanese invasion in the Battle of Myeongnyang (1597). The Admiral invented and used ‘turtle ships’ to destroy 33 of 133 Japanese warships. We were lucky to have been able to go on one of the turtle ships and go back in time to see what it would have been like to be part of the Korean navy. This was by far my favorite part of the trip. The turtle ship is quite the walk from the entrance of the naval base, so if possible, take one of the buses at the entrance gate. 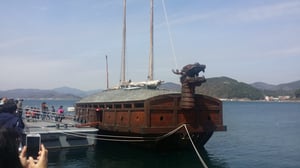 3. Jinhae Stream - The final place I highly recommend visiting when you go to the festival is the Jinhae Stream.  Located walking distance from Jinhae city center, a small stream of water runs through this town. cherry blossoms were planted to cover the stream so during this festival, crowds of visitors gather to take pictures of not only the cherry blossoms, but also the art installations that cover the stream. I was shocked to see these art installations because it is reminiscent of what we would find in Seoul. Close to the base of the stream, you will enter the heart of Jinhae, its town plaza, where there were many games and delicacies to taste. Walking around Jinahe was a great way to burn those excess calories! 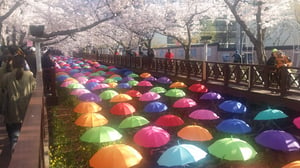 Jinhae was a great adventure and I am thankful to our Meetup Group for setting this trip up. Although it is possible to do a day-trip from Seoul, I think it would be best to make this a weekend getaway. You can either spend your weekend in Jinhae or its surrounding neighbors, or take a quick bus ride down to the beach town Busan.