Making the move from your home country to Korea is a big deal.  You will love your time here and grow to embrace the Korean culture. To make your time even better, check out my 3 tips that you should know to make your transition a lot smoother as you begin your time teaching in Korea.

When I first came to Korea, I didn’t have a phone because I had not yet set up my Alien Registration Card. As a result it was difficult to meet people since I didn't have WiFi.  To fix this issue, my group of friends had designated a place for us to meet so that we could go out (Thank you Cheonho Horns!). That made my first month here in Korea much more comfortable. The adventurer in me decided that I should just wake up early each day and walk around. As a result of walking all over my new surroundings, I was able to find different markets that sell cheaper produce and meat than the regular grocery store. I was also able to find a faster way for me to get to work so that I wouldn’t have to ride the subway. All of these tricks has helped me save money (which was one of the main reasons I came to Korea). Also, meeting the different restaurant owners allowed me to get ‘service’ (free food/drinks) whenever I went there. This helped me get more comfortable living here and feeling like I was part of the country. 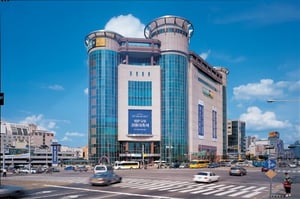 For many, the most convenient way to get around is the subway. The subway system here is clean, efficient, and cheap. You can travel from one side of Seoul to the other for around 2000 won. But one thing that many people are afraid to take is the bus. I love the bus system here! It has allowed me to see a lot of different parts of Seoul and it helped me not feel so claustrophobic as I do when I take the subway. There are different types of buses to help you get around so make sure to download the Naver application to your smartphone (you need to know Korean). Many try to use Google maps however, in Korea, Google maps does not compare to Naver Maps. 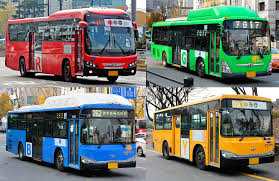 Small Green buses - known as ‘village buses’, they travel the shortest distances and look like mini-buses.

Yellow buses - These ‘loop-route’ buses run only at peak hours to move riders around faster.

Red buses - These buses connect regions of Gyeonggi-do (suburbs of Seoul) to major districts within Seoul and are usually express.

M bus - colored blue and gray, these buses are similar to red buses but have less stops within the route. Try to avoid these during rush hour because it will prove hard to get a seat and you will notice that the queue for this bus can be long. Don’t cut in front of the line!

Subways in Korea are really easy to travel on. Seoul, Busan, Daejeon, Daegu, and Gwangju all have subway lines while the KTX is the national system that connects all the largest cities together. The SRT (Suseo High Speed Railway) has just opened and it is a bit cheaper than the KTX. They too help commuters cross around the country.

Although I watch a lot of Korean television with subtitles, I definitely miss watching American television. Being in Korea, watching sports live can prove difficult because of the time difference. The NFL games in particular are tough as they begin in Korea very early on Monday morning. But if you want to watch it live, I suggest using the Reddit subpages to find links to games. Also, VIP box is another good website to watch all sorts of sports from around the world. If you want, you can always try to go to sports bars like Sam Ryan's in Itaewon or The Upper Deck in Noksapyeong. If you hadn’t known yet, Netflix does work in Korea and Putlocker is a good source for watching your comedies and dramas. If worse comes to worse, I strongly suggest to download a VPN. Some VPN blockers cost around $5/month and it will allow you to access all websites.

So these are my top tips for living comfortably in Korea. Do you have any other tips or have any questions to help your transition become smoother? Please leave a comment down below!