3 Tips to Stay Cool During the Hot Summers in Korea

When I first came to South Korea to teach English, one thing that I was looking forward to was the seasonal weather. South Korea has cool winters, warm springs and at times, very hot summers. As it is now August, this blog will give my top 3 tips on staying cool during the summers in Korea. 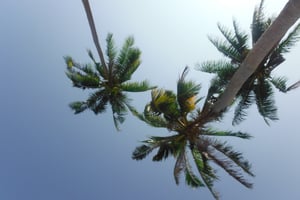 Eating cold noodles is not only one way of cooling down during these hot Korean summers, it is also a delicious way to sample some great Korean treats. My favorite cold noodle dish is “bibim naengmyeon” This dish consists of cold noodles, in icy water, which has been laced with a spicy sauce. In fact, if you like it hot, you can opt for some mustard paste to add some extra kick. This is served with vegetables on top and almost all of the time with a hard boiled egg.  Korean people often say if you eat the egg first it will protect your stomach from getting cold!  I really love this dish, as it is not only tasty but it also really does cool you down. This is a great dish to have for lunch or just before work. It’s also relatively cheap too, with the average cost being between $3 - $6. You can find this dish on almost every street in Korea. 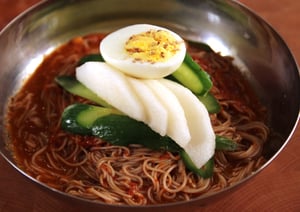 After your noodles arrive, I like to mix everything together and add a little mustard paste for some extra spice.  Another thing I love, although it is not a main dish and more of a side, is kimchi water.  It’s the iced juice from the kimchi, served with chunks of Mat Kimchi and radish. I have seen this a lot in Daegu, although it does not seem to be very common around all of Korea.

2) Go swimming in Korea's abundance of lakes and rivers 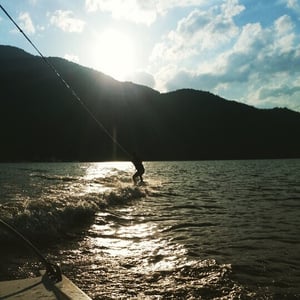 As I have mentioned in many previous blogs, South Korea is filled with many mountains, and as such there are an abundance of lakes, rivers and valleys to take advantage of during the summer. One of my favorite locations is Songju or 성주.  It is just an hour's drive outside of Daegu, and is a must for a weekend trip during summer. This location is popular among Koreans and English teachers alike.

By day you can play on the lake and go jet skiing, which something which I have yet to master! You can rent some tubes and float around, and by night you can relax in a cabin or pitch a tent and have a BBQ.  One word of advice you should watch out for the mosquitoes as they are everywhere this time of year.

Luckily for English teachers here in South Korea, there is no shortage of air-conditioned spaces. Whether you are on a bus, a subway or even at a street ATM booth, Air-con is everywhere. Also, unlike many public schools, Chungdahm has Air-con in all of its classrooms, which means you can stay nice and cool while you work. The fact that utilities such as gas and electricity are cheap in South Korea also means that you can leave your Air-con on for a long time in your apartment and not have to worry about any shocking bills at the end of the month. I leave my A/C on constantly at home, and even program it to come on an hour before I get home from work or the gym so that my apartment is nice and cool. Last month, my electric bill was just $28 which is great, considering how often I used it (without A/C my bills are usually $3 - $7 per month).