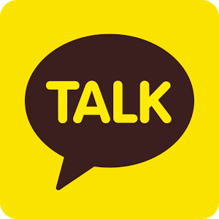 The first app to get is Kakao Talk and it is probably the most important app to get. Kakao Talk is used by nearly everyone in Korea. The reason being is that phone data is cheaper than text-messaging. Therefore, people get around the issue by using Kakao Talk as it uses data and not text-messages. Also, there are wifi spots all around, which means you can message and call for free. Kakao Talk can also be used for many other things as well, such as: photo and video sharing, large-group chats, video-chat, sending money and gifts, as well as sending contacts. Kakao Talk has their own set of characters, called Kakao Friends. Each character has their own back story, and if you ask your students which one is best, they will have a preference. So, if you want bonus points with your students, ask them! 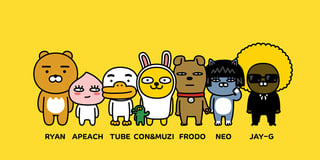 The Kakao Friends are actually so popular that they have their own character cafe/store, which is located in a number of busy locations, such as Gangnam’s main street. Also, more companies are jumping on board the Kakao Talk train, as their services are now being used through Kakao instead of through phone calls and messaging. One popular example is a company similar to Amazon, called G-Market. G-market now uses Kakao Talk to notify when a package will arrive. They have their own app as well, however I have yet to use it, as it is the same as their web browser.  Also, one of the best features about Kakao Talk is that it is a lot easier more comfortable to share contact info with other people without feeling awkward. On the other end, if someone is bothering you, you can simply block that person making yourself invisible to that person. 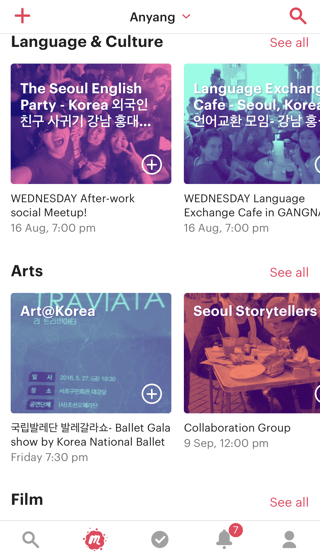 The second app that I want to talk about is called Meet Up. Meet Up is an app for finding and creating groups and events. There are all kinds of groups that have joined the app. The most popular groups seem to involve a language exchange between English and Korean speakers. However, there are many different kinds of groups as well. Recently, I discovered a soccer group on the app, and have been meeting up to play soccer games. 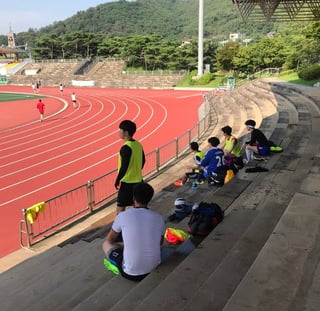 However, I also plan on joining other groups such as a painting group, and a boardgaming group. The app seems fairly popular as there are always a lot of people signing up for events. Also, if there isn’t a group for what you want, you can always create your own group and event. The groups range from social meetups, the arts, business, and even the occasional knitting group.

Mango Plate is exactly what you think, food. This app is awesome. You can find any restaurant with pictures anywhere in Korea. The greatest function is that you can actually use the location finder to see what restaurants are near you, how they are rated, and then see if the pictures look good or not. This app is a must have, because for foreigners, often times we don’t know what food is available to us, so we don’t know what to try. However, with this app, the guessing game is over!

HelloTalk is an app for learning languages, as well as socializing with new people. To use the app, you first choose what language you want to learn, and what you speak. Then a list of people from all over the world who speak that language pops up. You can choose as many people as you want and start conversations with them. Now, the wonderful thing about this app is that there is a built in translate function. So, if you don’t understand what the other person is saying, you can select the words and have it translate for you. Once you make friends with different people, you can obviously choose to meet them up in the real world for coffee, or you can simply confine your friendship to the app. With this app, I made pen pals in China, as well as Indonesia.

As silly as it seems, I want to state that GoogleMaps has been one of the most important apps I use. Without Google Maps, I would be continually lost. Also, it allows you to find buses and transportation in English. Without this app, it would be so difficult for me to get around Korea. Taking the subway is really easy, but taking the bus is best. You can get a seat most of the time, and also it is usually much faster with no transfers. With Google Maps, it tells you which bus to take, and where. Then you can continue to use the location services to see where you are and when you need to exit the bus.

All in all, I hope that you find these apps useful! I sure do.