5 Cultural Differences You Should Know Prior to Teaching in Korea

Korea is a wonderful place to teach and live in. There is a good balance between first world facilities and the Eastern-Asian experience. The country has boomed into a global metropolis that is internationally popular as well as an economic giant in Asia.

Koreans are very nationalistic and the idea of cultural strength is ingrained in every Korean. It is a proud nation that has unique etiquette and hierarchical relationships and these are a vital part of the country’s everyday life.

As a result, it is imperative that you try to know more about the culture before you begin teaching in Korea to avoid offending older generation Koreans. Usually, your branch manager and staff will take a greater liking to you if you show an interest in their culture and act in the correct manner. Always remember, that what you consider to be polite, is not always received as polite. Be humbled and do as the Koreans do in Korea. Below I have provided five cultural differences that you should be aware of prior to your departure. 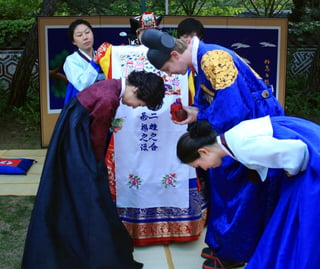 Korea's style of bowing is not the same as China's. Many people make this mistake by closing their hands and bowing. Asia is a large continent and every country has their own way of saying hello and bowing.

In Korea, you should bow when you say hello, which is pronounced “Anneong-ha-se-yo”. Koreans bow very simply by bending at a 45 degree angle. However, depending on the ranking of the person you should bow even deeper. This means literally touching your head to the floor.

When you arrive at your branch don’t be afraid to do a deep bow and say Anneonghaseyo  to your BM (Branch Manager) and to the Korean staff. You will be surprised how far this initial sign of respect will go in making your life easier in Korea. It will also leave a lasting impression that is vitally important in Korean culture.

In the first few weeks of being at your branch, there will most likely be a function called a 회식 (pronounced Hwe-shik). Hweshik is when Korean staff and foreign teachers get to know one another. It is usually held at a Korean BBQ restaurant and there is a lot of Soju drinking.

ln Korea, it is customary to welcome a new member by offering them a shot of soju. It is considered a sign of friendship and the beginning of a working relationship. Refusing to accept the shot can be seen as a sign of animosity.

However, it is not expected that you have to drink the shot, but more that you accept their shot glass and cheers together. Even sipping is considered completely normal and non-offensive.

Also, do not face your elder when drinking the shot. lt is respectful to politely turn your face away and drink the shot.

Sometimes you could even say thank-you, 감사합니다 (pronounced Kam-sa-hab-nida), and bow as you extend both hands to receive/give the item.

4. Don't Start Eating Before an Elder

Korea has a unique dining etiquette that is probably the most important part about Korean culture. Eating out or eating together is how Korean people bond and get to know one another. As a foreign teacher, you will impress your Korean co-workers a lot more, if you practice Korean dining etiquette when out together. It will go a long way in creating a good relationship with your boss.

So when eating out with your Branch Manager and staff make sure to know your hierarchical ranking. In Korea age is key to a system of respect, therefore you should never eat before an elder sitting at the same table as you. The polite thing to do is to wait for an elder to pick up their chopsticks and eat something first. This even means that you shouldn't touch your chopsticks until the first action has happened.

If you would really like to impress your boss and you are the youngest at the table, you should set everyones dining place with a spoon, chopsticks and a napkin, and a cup of water. Usually the youngest will do this task, out of respect for their elders. 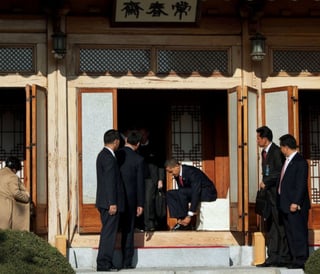 5. Take Off Your Shoes

Depending on the situation, it is customary to take off your shoes in Korea. If there is a shoe-shelf or a doorway full of shoes, then generally it means you should follow suit, and take off your shoes. Generally, taking off your shoes is more predominant in the countryside, than in a large city like Seoul. Such places could be a restaurant, your school, your apartment, a Sauna and a office.

Once you arrive in Korea and you settle into your apartment, it is important that you respect the no shoes policy indoors. Renters can get really upset about you not respecting their culture and this could lead to a disgruntled Korean. If it bothers you, try to figure out ways to make taking off your shoes more comfortable, by only buying shoes that are easy to slip on and slip off. You will become accustomed to wearing indoor slippers and socks, which you will soon come to love more than wearing your own shoes.