This may not be profound or educational or particularly interesting to anyone but me. But I want to write about one of my favorite days in Seoul that reminded me why I wanted to return. It’s not really resourceful, but rather an interlaced web of visions and sounds that buried my heart deep into the belly of the city, and for this I’m grateful. So if any of this interests you, read on.

I left Seoul after my year long contract in late August of 2016, muggy and riddled with summer steam. After weaving through what “home” meant for me in ethnic spaces throughout Southeast Asia, my best friend convinced me to stop by once more before going back to the US. I changed my flight date and flight city from Manila to Seoul, where I had started a very dense journey a year and a half before. Leaving everything and all people I knew, I had carved out somesort of haven for myself. When I touched down at Incheon after those six months of traveling, I swapped my linen shorts for a sleeping bag sized puffer jacket that covered all five feet of me. Coming back in early February meant ordering food to the studio apartment I crashed in with a friend up an unkind hill in Noksapyeong. The only logical activity was ordering Andong jjimdak, which translates directly to “steamed chicken of Andong,” tender slices of chicken marinated in Korean soy sauce with vegetables and absorbent chewy noodles. A few of my friends and I went dancing at Cakeshop in Itaewon in aforementioned sleeping bag coats, on top of the thrifted chartreuse ahjussi pants I scavenged in the snow at Dongmyo market (Dongmyo exit three, open every day). Key tangent- if you go there, check out the range of tchotchkes like ornate floral teaspoons and violet suede combat boots and snack on crispy boongobbang, fish-shaped waffles filled with red bean paste, traveling thataways from Japan through its colonization of Korea. Wow, I veer off topic easily, this time the reason remembering that even in winter, there are nineteen solid things I love about Seoul.

Zooming forward a bit. I stayed in Seoul for four weeks, and my last day in early March of 2017 was one of the most ideal dreamscapes of my life, and I want to map it out here. By this time, the snow had thawed for good, so my friends and I went shopping at Stylenanda and Express Bus Terminal for spring clothes. (Express Bus Terminal is one of the best underground malls to get lost in.) We dressed in shorts and t-shirts with pictures of giant ice cream cones or graphics that said “overreacthing,” which will likely be  the name of my autobiography. One of my best friends who was serving his term in the army reserved the day off in advance, so he came from the south to spend the weekend. Along with two other good friends, we started our Saturday right: at Paris Baguette. Not a day went by when my friend from school, who was traveling throughout the country for five months, didn’t dart into each Paris Baguette he saw to buy at least one, if not two, if not three chapssal donuts, glutinous rice donuts filled with red bean paste. The pattern is very clear: red bean is scientifically proven to bring joy and fortune to your life. Afterwards, we took the pink line 8 to Mongchontoseong Station, exit one. We picked up bottles of soju, sat in a perfect square of stools in front of the Peace Gate, took a sip, and let the day really begin. 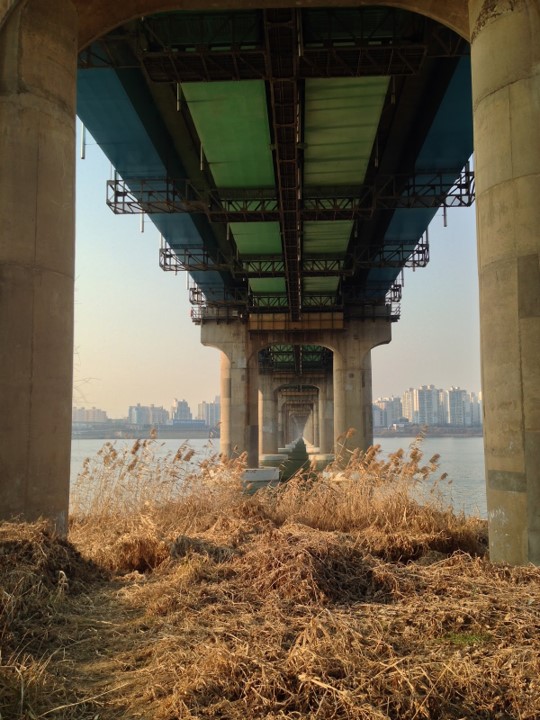 We packed a bunch of Korean snacks like honey butter chips, tteokboki chips and green grape soda, blasting music from small speakers and having a picnic by Lonely Tree. It’s a tree in the middle of an empty incline in Olympic Park that looks more surreal than a Windows Desktop image. Because of the warm weather, the hill was filled with couples taking selfies and kids playing tag… and also taking selfies. Being around these Korean loved ones felt straight out of a movie. We spent hours rolling down the hill, acting completely foolish. Afterwards, we wandered and reached the southern side of the bridge that crosses the Han River. We took the elevator up and began crossing. This moment may be one of the most beautiful I’ve ever experienced, playing Frank Ocean from a phone and standing on the edge of the fence that blocked the train, meaning that each time it would go by, we’d jump on the fence and feel the wind from the speed, being on eye-level with the passengers inside. We blew bubbles, took videos, and even did plyometric drills and deep stretches with the view of the setting sun on the water. If the day ended here it would’ve been perfect. Honestly, if life had ended there, it would’ve been perfect. 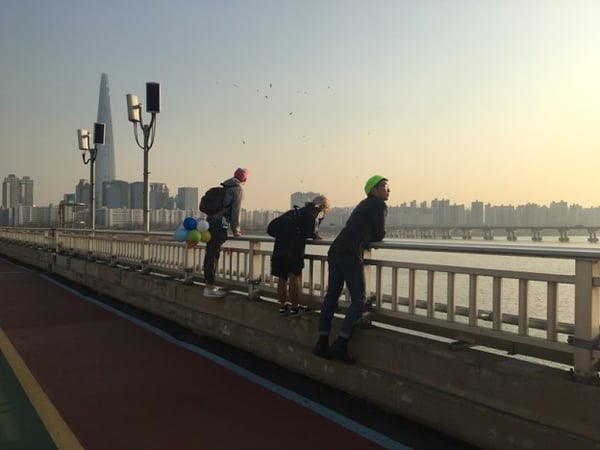 We then made our way to the Seongsu-dong station of line 2.  That neighborhood is known for shoemaking. In the station itself there’s an exhibition showcasing the talent and technique that goes into making shoes, which looks much harder than you’d imagine, leading me to gain even more respect for artisans and craftspeople who maintain love and diligence to their work amidst rapid development and consumer shortcuts. We reached S-Factory, an art space that was doing a multi-media exhibit on Austrian artist, Gustav Klimt. Another example of why I love Seoul is the sheer magnitude of art that flows in and out, of local and international artists of the highest caliber. It didn’t simply showcase his paintings, but instead used cunning technology to experience his works mixed with music, film, neon lights, and LED screens.  At the end, there was even a virtual reality of a palatial dining room. I’d never been to an art exhibition like this, and it was indeed telling that I’d experience it in Seoul. 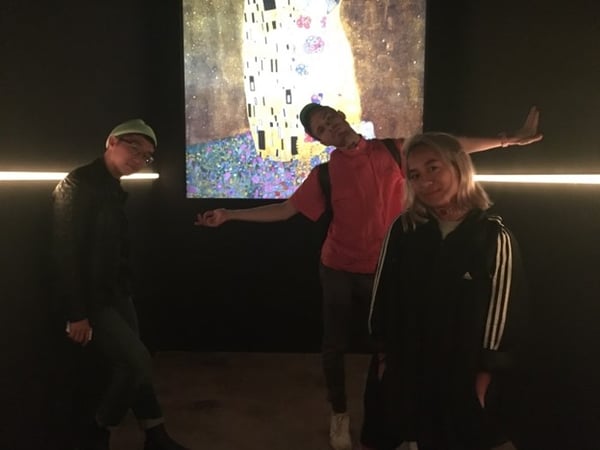 A day in Seoul wouldn’t be complete without loitering at a convenience store, so we grabbed corn silk tea and kakao talk themed coffee and rested our feet. Then we made our way to Itaewon and found a mom and pop place and warmed up with clams, mandu (Korean dumplings), and udon noodles. And if we weren’t convincing as unofficial Paris Baguette ambassadors, we made a second trip for the red bean donuts. Because nightlife in Seoul is no joke, we brought changes of clothes and changed in the Hamilton Hotel bathroom. No exaggeration- we washed our faces and reapplied not only our makeup but our skincare, and none of this felt out of place with the other people putting on their saturday night’s best. Part seventy-three of my favorite parts of Seoul is the fact that you don’t need to buy a drink at a bar if you don’t want to - you can just grab a bottle of soju, find a stoop to perch on, and watch the crowds of beautiful people walk by. And if you want lighter fare, you can find a cafe for some rose petal tea or a flat white late into the night, as coffee shops tend to stay open later. We cozied up in one for a while, listening to the jazz records the baristas played and summoned up more energy for the night. 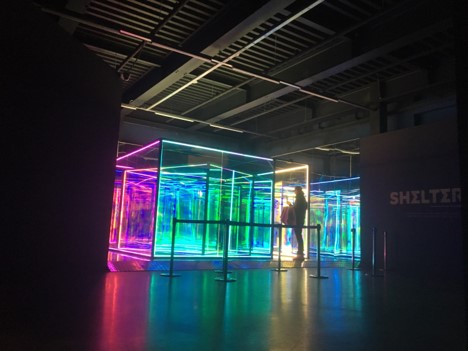 Although many clubs in Seoul charge covers, there’s plenty of good ones that don’t, and that play good music to boot. We went to Pistil, which is in a dark basement where you can dance in the dark, free to be as anonymous as you please. Somehow, we ended up at Faust, a smoky Berlin-ish techno club which I’d never expect to find, which is just part of Seoul’s charm. We danced into the morning, sat on a hill and watched the sun, and then walked through Jamsil and ordered fried chicken at 10 am. I gathered my 65 liter backpack, walked to the airport bus stop, and was on my way back to Incheon by noon, knowing very well that the last twenty-four hours was the perfect representation of the surprises you meet in the city, and a souvenir that affirmed that I would be back soon.

Tags: teaching at Chungdahm, Weekend activities in Korea, things to do in seoul