Planning a Trip to Tokyo? Make Sure To Visit These Top Attractions

As soon as I found out about the Lunar New Year holiday, I was excited to plan a trip to Tokyo with friends for our first ChungDahm vacation. The Lunar New Year holiday  (Seollal) granted us a 4-day weekend to explore Tokyo.  One of the perks of teaching in Korea is that Tokyo is a mere 2 hour flight from Seoul. Flying from Gimpo into Haneda was the best option for us, as Gimpo is a mere express stop from my place in Seoul, and Haneda is the closest airport to the center of Tokyo. We booked our flights online a month before the trip, through Orbitz. However, traveling anywhere during the Lunar New Year in Korea is expensive, and we ended up paying quite a bit for our tickets (around $500). If you are planning on traveling during holidays in Korea, I would recommend arranging transportation as far in advance as possible, and taking your time researching the cheapest route possible! It is possible to get a round trip to Tokyo from Seoul for as cheap as $150... obviously not during peak traveling periods. We flew ANA and had a good experience.

After our early morning accidentally purchased business class flight, we spent our first hour (ok, maybe two hours) learning to navigate the Tokyo Metro, which I found to be pretty tricky. I mean, obviously the most highly used rapid transit system in the world gets rather hectic, however, throw in the fact that there are two major operators, and transferring becomes quite confusing! It took some time, but we managed to figure out where we needed to be and didn't get lost! 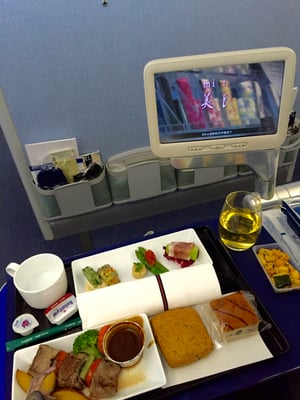 The Pokemon Mega Center was one of our first stops, in Ikebukuro, Tokyo's downtown area. We were greeted by a massive Charizard, and Pikachu, and were all in awe at the sheer volume and variety of Pokemon merchandise available. They seriously had everything you can imagine from clothes to jewelry to toys, and my favorite- Pikachu ramen. 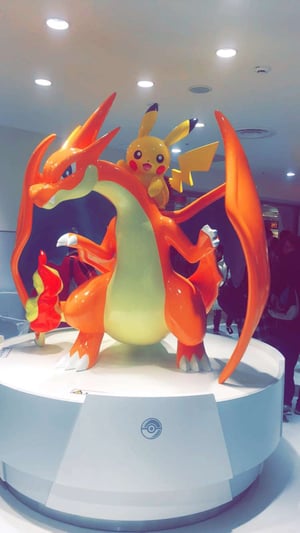 After our first Japanese meal, some browsing and Purikura photo-booth experience (which is a must-do while in Tokyo!) we settled into our hostel, located in North Eastern Tokyo. We had made reservations online for the Space Hostel Tokyo which was recommended to me by a friend. It turned out to be really wonderful- clean, conveniently located, decently priced and they provided free wi-fi. I couldn't ask for more. After dropping our things off and freshening up, we headed to Shibuya to meet up with friends of a friend. It turned out to be an interesting evening to say the least- mostly thanks to the all-you-can-drink self serve bar. Dangerous, but so much fun! 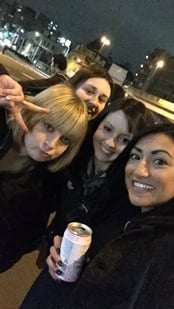 The next morning after a sushi breakfast, we toured Meiji Shrine, located across from the infamous Harajuku neighborhood. The Shinto shrine is a short walk from Harajuku station, through a beautiful forested area. Along the way, you can see massive barrels of sake, as well as wine barrels, that were gifted by France. The entire shrine experience was extremely tranquil, and provided an interesting contrast to the craziness that Tokyo is known for. In front of the shrine there was a massive tree with wooden notes that are wishes written by those who visit. It was beautiful to read the messages written by hundreds of people from around the world, all with common themes of family, health, and happiness. 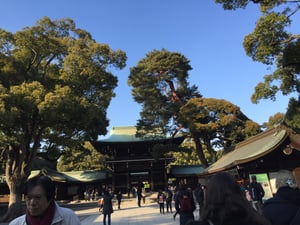 After visiting the shrine we headed to Takeshita street, and strolled through the insane streets of Harajuku. Ever since Gwen Stefani's Love. Angel. Music. Baby album I've wanted to witness Harajuku for myself. It did not disappoint, you must go and see it for yourself. As an avid shopper, I felt truly in my element. I wound up picking up an insanely glittery phone case, chopsticks, a face-mask and a few beauty products that I look forward to testing. Harajuku is wild and any girly-girls shopping paradise, there's just so much to see... and eat! I'm a big fan of the plastic Japanese displays which are outside of various restaurants to tempt potential consumers. I had to get myself a crepe after seeing hundreds of them on display. 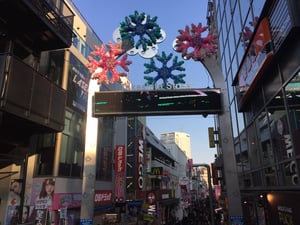 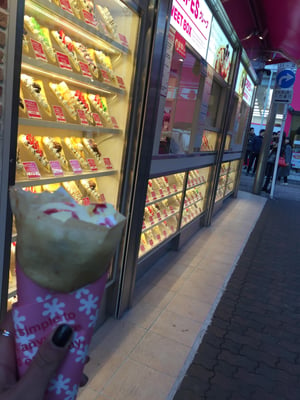 After shopping ourselves to exhaustion, we headed to Akihabara, aka the Electric Town, the anime and magna capital of the world. Although my knowledge of Japanese magna characters is limited to Sailor Moon, it was incredible to see all of the lights, screens, and gadgets. My friends that are into anime were in heaven, as you can purchase any good with your favorite characters face on it. I personally found Akihabara overwhelming- the amount of lights/noises as well as things to focus on are insane. It's a must see- but I could only handle it for a while... which led us to our next stop a Japanese maid cafe.

I watched a documentary on Japanese maid cafe culture, and was immediately obsessed. Going to a maid cafe was on my bucket list long before I decided to teach in Korea. Maid cafes are pretty much restaurnts designed to cater to the customers needs, and provide extremely stellar service. All of the "maids" are dressed in over-the-top "kawaii" costumes, and were extremely friendly. While it was over $20 for a drink and ice cream, the money was well worth the experience. As soon as we were seated at our table, a maid came over and gave us all bunny ears. I'm not kidding, these women were the most enthusiastic people you will ever meet. It must be exhausting. Our "maid" instructed us to say "moy moy" in a cutesy voice while she served us. I still have no idea what she was saying the entire time, but it was hilarious. There was also a singing and dance act, which we only experienced the tail end of. We ended up getting to take some photos with one of the maids, which I will definitely cherish as we were not allowed to film/take our own pictures inside the cafe. 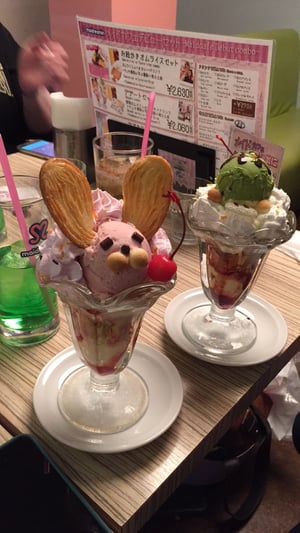 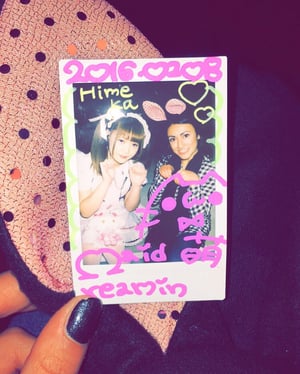 The next morning I got up fairly early and went with some friends to the Tsukiji Fish Market, the famous wholesale market located in central Tokyo. One of the major tourist attractions, the Tsukiji Fish Market was a highlight for me. There were so many varieties of fish and it was so interesting to observe the fishermen and business men going about their daily lives.  I had my first ever sushi breakfast at a restaurant inside the market. It was hands down the best sushi I've ever had- melt in your mouth tuna that iwas so incredibly fresh. I remember feeling sad while eating my last roll, thinking that I may never have sushi this delicious again! 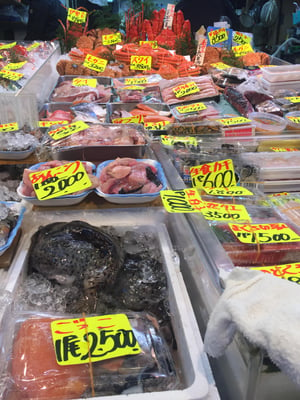 After the fish market, we went up Tokyo Tower, and explored Roppongi, on a quest for some soba noodles. They did not disappoint. I have to say- everything we tasted in Tokyo was divine. I learned that Japanese cuisine and food culture is quite unique, in that a Japanese Itamae (or chef) is typically a perfectionist, and will not send food out to a table, that they do not consider the best. This translates into the most delectable and stunning dishes... some of the most delicious I've had ever. 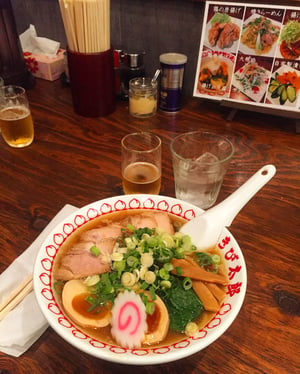 After a haircut, and much-needed nap, we spent our last night in Tokyo checking out Asakusa shrine, which was a short walk from the Space Hostel. I would highly recommend going to see Asakusa shrine at night, as it looks magnificent lit up, and was not very crowded with tourists at the time. The Asakusa shrine was built in 1649 and honors three men.  It is now a site used during festivals and celebrations, as well as one of the major tourist attractions in Tokyo. Well worth seeing!

All together, Tokyo was an insanely busy whirlwind of a trip- just how I feel a long weekend in the city should be. It is to easy see a lot of things in a short period of time due to the rapid transit system (once you've figured it out)! It's also great that Tokyo is such a short flight from Seoul, making it easy to travel to on a weekend. I certainly enjoyed the break, and got to check a lot of things off of my travel bucket list!