Best Food and Places to Eat in Busan

Busan is primarily known for its ports, beaches, and educational sector but that being said it is a metropolitan city of 3.5 million people so there is bound to be some great restaurants and hidden spots for delicious food.

Since moving to teach English in Korea 3 weeks ago I have tried some amazing food, and have definitely found some favorites. My first favorite dish has been pajeon, it’s typically known as a Korean pancake. It’s made with rice flour, egg, onions, whatever other ingredients you like, and is fried in sesame oil. I prefer mine with just vegetables, but kimchee and seafood are quite popular flavors here. I’ve also found that pajeon has been the simplest Korean food to replicate at home. 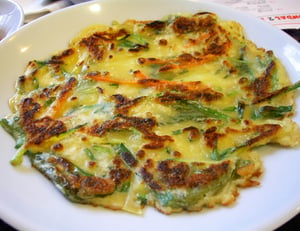 Since I am slowly easing myself into spicy food, which is a staple in Korea, I find that pajeon is great for neutralizing spice. It is also super easy to order at a restaurant, which is a huge plus for foreigners, because almost all restaurants serve it and it is easy to say, phonetically, it can be pronounced as “pajung.” The best pajeon I’ve had so far in Korea was in Seomyeon, which is Busan’s biggest commercial and retail area.  I had my favorite pajeon at a little restaurant which also specializes in making their own delicious flavored mokkoli, which is Korean rice wine. 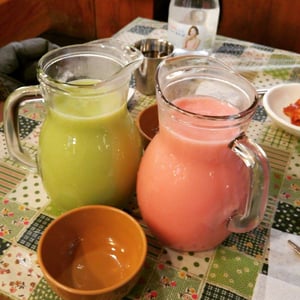 I live in the district of Gaegeum, which is 3 subway stops away from Seomyeon on the Line 2 – the green line. In Gaegeum, right around the Chungdahm branch where I teach and the apartment where I live, there are tons of great places to eat, especially since I live and work right beside the Gaegeum market, also known as the Gaegeum sijang. In and around the market you can find many tents where simple food such as pajeon, or gimbap, also known as Korean sushi, is prepared right in front of you. The best part is the cost of food at these tents are very low.

One of the best places I’ve found to eat in the Gaegeum area was the Kei Shabu and Salad Bar restaurant located right across the street from my branch on the most major street in Gaegeum, Gaya-daero. Shabu is a soup dish where thinly sliced beef is boiled in a broth and vegetables are added. Many different Asian cultures have a similar dish with slight variations, in China it is called Hot Pot, whereas in Japan it is called Nabemono. All dishes are served communally and the heavily seasoned broth at the end is used to cook noodle soup. It is a very common dish served in the cold winter months. 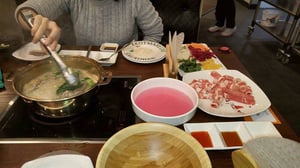 At Kei Shabu they also serve a very common and traditional Korean dessert, called patbingsu. Patbingsu is shaved ice decorated with toppings such as sweet red beans, fruit and condensed milk. The dish is very light and refreshing! 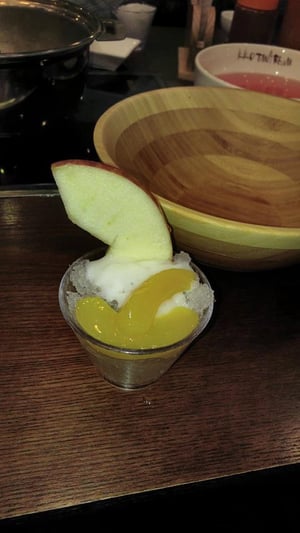 Throughout my few weeks living here I have had no trouble finding any specific foods, including North American foods. Luckily, I live right around the corner from a food mart, called Top Plus Mart, which has everything I need grocery wise. Anything I can’t find there, perhaps I am craving Pringles or peanut butter, can be found at Homeplus down the street. Homeplus is sort of the Wal-Mart equivalent in Korea. 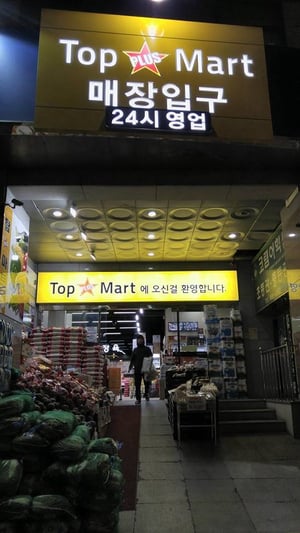 Top Plus Mart in Gaegeum

My food experience so far has been amazing, and I am only looking forward to a time in the hopefully near future when I can eat kimchee with no fear, and without arming myself with a bottle of water first.